WD updated its performance Black and NAS-optimised Red series of M.2 SSD drives within the last year. Handy to know, but the real volume seller in the PC space is the entry-level Blue line.

HEXUS duly took a look at the revised SN550 last year and surmised that it was a good option because 'the WD Blue SN550 effectively doubles the performance of a traditional SATA-based SSD in demanding workloads.'

That remains true to this day, yet competitors have moved the needle with respect to performance since the SN550's inception. Not wishing to stand still, WD brings forth a faster Blue drive called SN570.

The Blue SN570 builds on the SN550 in the same way that built on the SN500. Headline improvements include an increase in both sequential and random reads and writes, and now Blue SN570 rivals the sort of specifications previously limited to the likes of the Black SN750 from 2019.

This trickle-down technology is a hallmark of the SSD evolution, as previous high-performance controllers and TLC NAND are migrated further down the stack.

Blue SN570 is very much a drive for mainstream usage and is equally at home in desktops and laptops with a spare M.2 2280 slot. There are no major surprises here. An in-house WD controller is paired with, presumably, 112-layer TLC NAND. Leaving the fastest interfaces for premium drives, Blue SN570 connects with the system via the established PCIe 3.0 x4 protocol.

Fine-tuning on WD's part heralds speeds of up to 3,500MB/s read and 3,000MB/s write on our 1TB sample, though lower-capacity models don't offer as much straight-line oomph due to a lack of parallelism.

Still, there's nothing wrong with the 1TB SN570's specs. Costing around £90, the value argument is robust enough compared to immediate competitors. Our main gripe is the lack of a 2TB model in this space. We can also question the usefulness of a 250GB edition for the enthusiast DIY space. Such capacity is barely enough to host a couple of games and makes more sense in the mass-market OEM segment. To that end, WD may repurpose this drive into a 2230 form factor and change its model designation.

All Blue SN570 models are single-sided, bringing into sharper relief the reason why a 2TB or 4TB doesn't exist; there's certainly space for the additional ICs on the front and rear.

What's immediately clear is that WD continues to run with a DRAM-less architecture. Doing so reduces cost, albeit at the expense of better performance from having buffering space for regular operations such as lookup tables: DRAM will always be faster than NAND. 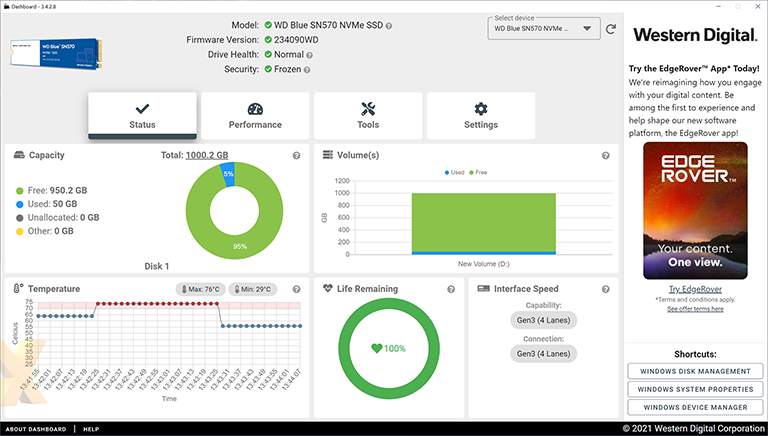 Having the NAND do the caching can call longevity into play as it's used more often than on a DRAM-equipped SSD. Yet endurance is up to scratch here, with the 600TBW rating translating to around 0.3 drive writes per day over the five-year warranty period.

A portion of the NAND is automatically configured as single-level-cell (SLC) for high-performance caching reasons, making frequently used data hotter and more immediately accessible. The amount of cache is fixed by WD and not adjustable by the end user.

There's no hardware-baked encryption here, and WD provides a few relevant metrics through its well-organised companion Dashboard app. It's good to see WD continue to provide Acronis True Image for easier migration from an older drive. Tools, meanwhile, are limited to updating firmware.

Arriving with the promise of more speed than Blue has ever had before, let's now examine how fast the SN570 is.