In an earnings call with investors this week, it has been confirmed that consumers will at long last get access to Seagate HDDs with capacities up to 20TB. Multiple consumer-focussed HDDs with capacities up to 20TB are going to be released in H2 2021 (between now and New Year) and they will be based on perpendicular magnetic recording (PMR) and shingled magnetic recording (SMR) technologies. Dave Mosley, CEO of Seagate, told analysts and investors that "We expect to begin shipping 20TB PMR drives in the second half of this calendar year." For comparisons vs other manufacturers, PMR is sometimes referred to as conventional magnetic recording (CMR). 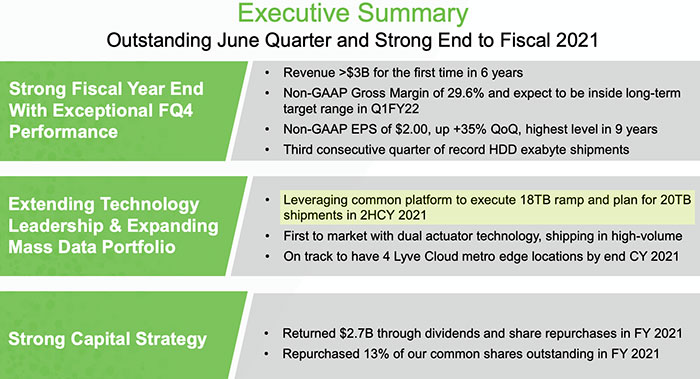 Currently, Seagate ships 20TB HDDs based on its heat-assisted magnetic recording (HAMR) technology only to select partners and as components of its Lyve storage systems. So, it is good that regular consumers with hefty storage requirements are going to be addressed by Seagate later in the year. 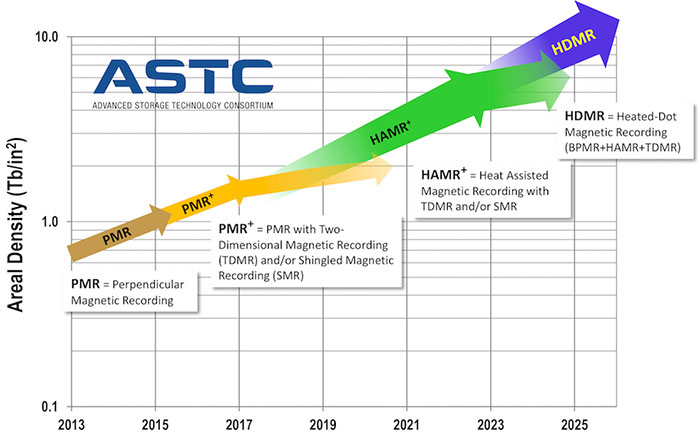 A report published by Tom's Hardware says that the PMR-based 20TB HDDs from Seagate will feature two-dimensional magnetic recording [TDMR] enhancement. TDMR has been used by Seagate for years and is behind existing 14TB, 16TB, and 18TB HDD products.

Meanwhile, customers will be able to choose better value/TB SMR drives, should they be suitable for their intended purposes. This talk of CMR and SMR reminds me of the controversy of companies like Seagate and WD 'submarining' SMR drives into their storage portfolios. Tech buyer backlash caused storage companies to pledge better product labelling going forward.

We will get to know more about the "different flavours" of 20TB platforms coming soon from Seagate nearer release time.

Seagate's latest roadmaps, from March this year, shows that PMR drives are running out of road, but HAMR tech is expected to facilitate 50TB+ HDDs by the end of 2026. For capacities beyond this, Seagate is looking at new media, and leveraging undisclosed new materials (Graphene perhaps?) it aims to hit 100TB+ HDD capacities by 2030.

Posted by ik9000 - Fri 23 Jul 2021 13:03
that PMR+ monika sounds dubious. So long as they make it simple to differentiate between SMR hamstrung devices and CMR then fine. But not if they just say “this is a PMR+ HDD” when it could mean two different things.

Having been lumbered with two SMR 4TB drives I am not best happy with seagate's past sneakery in describing things.
Posted by Saracen999 - Fri 23 Jul 2021 15:27
And so the capacity upgrade bandwagon rumbles on.

Oh, it's good but 20TB don't interest me. Why not? Mainly because I'm more interested in high capacity, up to a point, but price per GB (or TB) is more important than capacity.

I've just (today) received the fourth of four 12TB WD drives (DataCentre type HC520s). I could have gone for 14TB, 16TB or even 18TB, and arguably, needed fewer drives. I could also have gone for 4TB, 6TB, 8TB or 10TB but to get the same capacity would have meant more drives, and therefore a bigger NAS.

So, I spreadsheeted it all. Capacity, total usable capacity with x drives in Raid 5, cost per TB, cost of bigger NAS units and so forth and for my needs, the sweet spot was 12TB. If the 14, 16 and 18TB drives are at too much of a premium a price, the 20TB drives are unlikly to be less than even more out of consderation. For me. for anyone else, YMMV, and different criteria might apply. 36TB is Raid 5 should be more than enough for me for a long time.

If anyone is wondering, why did drive 4 arrive today? Because I bought one some weeks ago to test, then when I tried to add the next 3, Amazon restricted it to two maimum, and a week before I could get the fourth. Now I have a raid rebuild to do. Thanks, Amazon. :(
Posted by philehidiot - Fri 23 Jul 2021 15:40
I remember back in the day when we had 20MB drives and it was more than enough. The system disk went into the floppy drive and that was 20MB of glorious ASCII pr0…

philehidiot
I remember back in the day when we had 20MB drives and it was more than enough.