Storage-centric news blog Blocks and Files reports that both Seagate and Western Digital have been 'submarining' SMR HDDs into products where they might not be an optimal choice. It says that Seagate has acknowledged some of its Barracuda Compute and Desktop disk drives use shingled magnetic recording (SMR) technology. WD was also honest enough to admit to B&F that it is selling 2TB-6TB WD Red NAS drives using SMR tech. However both Seagate and WD haven't been honest enough to be upfront about the use of SMR tech in the products under the spotlight, and these drives "don't report themselves as SMR when questioned via conventional means," noted an expert user. 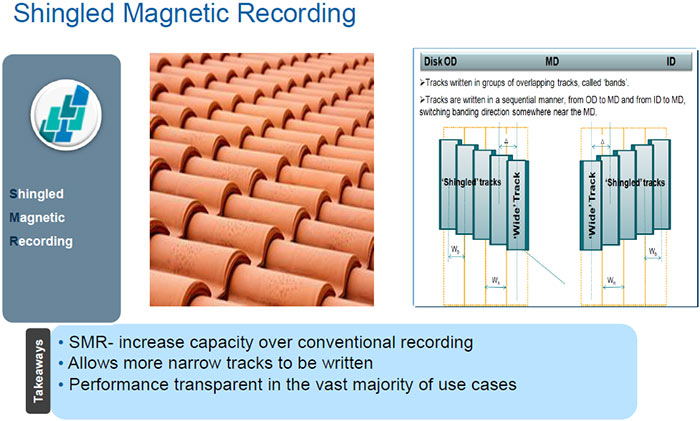 In its first expose of SMR 'submarining' on Tuesday, B&F noted the complaints of Alan Brown, a network manager at UCL Mullard Space Science Laboratory, the UK’s largest university-based space research group. Brown said that he had been getting errors with adding fresh disks to RAID arrays - with the new WD Red NAS drives he bought. He asserted it was due to these drives using SMR tech, which provide "rotten performance for random write usage".

An official WD video explains how SMR tech provides greater density, above. Seagate has a similar video here.
Neither company talks about performance in these tech overview videos.

WD has commented upon the report to say that "All our WD Red drives are designed meet or exceed the performance requirements and specifications for common small business/home NAS workloads. We work closely with major NAS providers to ensure WD Red HDDs (and SSDs) at all capacities have broad compatibility with host systems." Importantly, the WD spokesperson added that "Currently, Western Digital’s WD Red 2TB-6TB drives are device-managed SMR (DMSMR). WD Red 8TB-14TB drives are CMR-based." 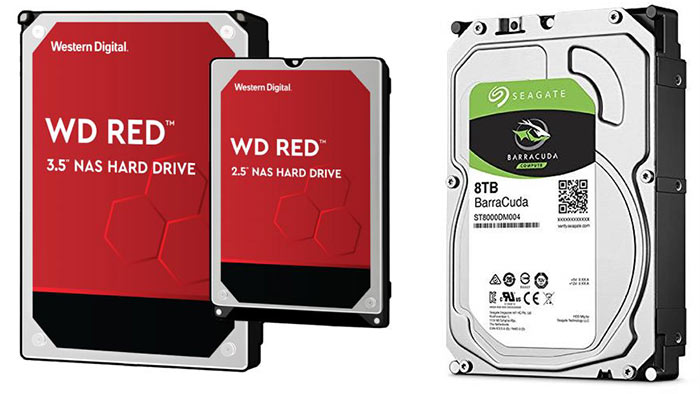 Moving onto Seagate, yesterday B&F followed up with a report on this iconic storage company quietly introducing SMR into its Barracuda Compute and Desktop disk drive range. Public facing documentation for the drives in question don't mention SMR tech but conversely this tech is highlighted in documentation for its Exos and Archive HDDs. Remember that Seagate markets its Barracuda Compute drives as particularly fast - but data rewrites on SMR drives are sometimes slow if not 'bursty in nature'.

Seagate admitted SMR tech was in the products when questioned by B&F but gave an excuse for not mentioning it in the documentation. "We provide technical information consistent with the positioning and intended workload for each drive," explained a spokesperson.

Posted by [GSV]Trig - Thu 16 Apr 2020 13:20
Not good for RAID either, probably a way to separate NAS drives and Gold/Enterprise drives perhaps?
Posted by edmundhonda - Thu 16 Apr 2020 14:35
SMR is garbage. There's a usecase in long-term cold/near cold data storage and that's basically it. Selling it unlabelled is miserable; selling it for use in a NAS (and lying about it when questioned!) is unacceptable.

I bought a 6tb Red last year, my 12th WD Red drive. I won't buy another.
Posted by [GSV]Trig - Thu 16 Apr 2020 16:13
I was looking at a 6 or 8tb WDRed as my next drive, furlough has meant me going through all my backups and such and getting rid of duplicates and old files, so I've gone from 3Tb of free space to over 6Tb, so I don't need a drive at all now, which is good given this coming out of the woodwork…

Tom's Hardware got the following from WD.

Seagate have been a joke a long time a d Western Digital have longed to be as bad for years.

Unfortunately they bought up the competition so they cuould fix prices and control the market.

If it wasnt for the emergence of ssd, who knows what state we'd be in.

Yoyoyo69
If it wasnt for the emergence of ssd, who knows what state we'd be in.

presumably liquid or gas, given the absence of solid state?