Back in mid April, HEXUS covered the news that various HDD manufacturers had started introducing shingled magnetic recording (SMR) technology rather sneakily into their consumer and Soho/SMB ranges. This activity was referred to as 'submarining' by the site that unearthed it, Blocks and Files. Initial reports focussed upon the discovery that WD and Seagate both indulged in this 'submarining' of SMR products into traditionally CMR ranges, however we discovered that Toshiba also indulged in unclear product labelling/specs in this respect.

All the involved companies have been working on their promo and technical materials to make the choice between their SMR and CMR products clearer to end users. Earlier this week WD outlined its re-defining of the WD Red HDD product family, which is targeted at NAS users.

Going forwards, there will be three sub-ranges which form the WD Red HDD series, as follows:

The product series chart below makes the choices available even more clear. WD asserts that its DMSMR drives are still the best choice for sequential performance, both in its internal tests and in various third party benchmarks - for the price. 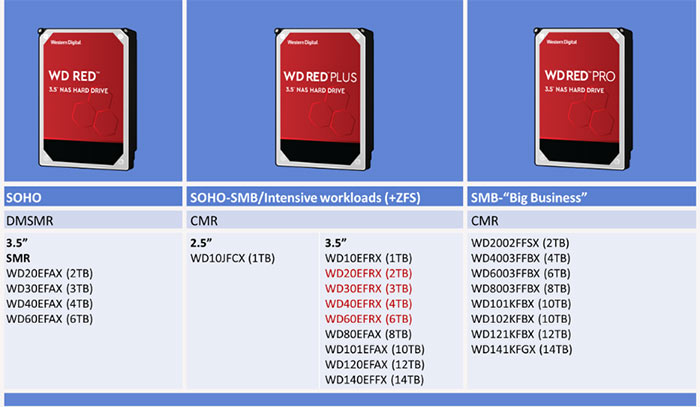 WD rounds off its update on this SMR/CMR NAS HDD saga by assuring readers that it is listening to both customer and partner feedback carefully. It still has confidence in the use of its DMSMR tech in many use cases, and will continue to test and work with partners to validate compatibility, performance, endurance and other factors. Whatever the case, at least it is now pretty clear which WD Red HDDs feature which hard disk recording technologies.

Your chance to bag a 2TB bundle of NVMe storage!

God I hate extra models for absolutely no reason other than making something that should be standard in the sector cost more…
Posted by ByteMyAscii - Thu 25 Jun 2020 12:28
That isn't any clearer.
RED has been the NAS product range.
And SMR is not suitable for that.
Keep SMR out of the RED range, full stop.
Posted by DanceswithUnix - Thu 25 Jun 2020 14:21

ByteMyAscii
That isn't any clearer.
RED has been the NAS product range.
And SMR is not suitable for that.
Keep SMR out of the RED range, full stop.

Agree they could have done with a new colour for these, but they are not a cold storage drive. If you are only using a cheap consumer NAS where most of these end up, then these drives will be acceptable and better value.

You aren't always writing to SMR, they have a large area of conventional recording which is written to. When you stop writing, it moves data from CMR cache out to a shingled region.
If you are doing large file writes, like video files or machines backups, then shingled recording doesn't hurt so running out of cache isn't a problem.

If, like me, you run a VM farm off your NAS drives then you want to steer well clear. But then if you care that much, perhaps you need Enterprise drives not NAS drives. Those are so expensive, perhaps an SSD would be better.
Posted by simonpreston - Thu 25 Jun 2020 15:14

DanceswithUnix
If you are only using a cheap consumer NAS where most of these end up, then these drives will be acceptable and better value.

Isn't ZFS, which many consumer NAS boxes use, not playing nicely with SMR part of the problem, though?
Posted by Tabbykatze - Thu 25 Jun 2020 17:43

simonpreston
Isn't ZFS, which many consumer NAS boxes use, not playing nicely with SMR part of the problem, though?

It's the fact it's DMSMR which is Drive Managed. ZFS has the ability to work with Host/Hybrid managed SMR as far as I know so ZFS can work with the technology properly because it can't be worked with like a norm CMR drive.

WD are in the wrong here and with the except of very basic NAS uses, using DMSMR drives in their range of NAS drives is not acceptable.

Even with the higher potential failure rate, I am glad I kept our business in Seagate realms.