There are lots of computer-based activities that eat up your storage capacity. As well as the consumption of vast GBs of space by photography / videography pursuits, some people store large movie/TV show collections, and others have large game libraries. The trend for storage consumption only ever seems to go upwards. PC gamers will have noticed this particularly with AAA titles from the big publishers like EA, Take2, and Ubisoft. It is quite common now for a game, and don't forget DLCs, to hog 100GB of your disk. Hence a mainstream 500GB or even 1TB SSD would be pretty quick to fill up if you are an avid gamer.

My desktop is now all-SSD but in my laptop I still have a secondary HDD drive where a few 'games du jour' are saved. The difference in loading times for modern games can be stark (as the game library on the laptop is saved on the much larger HDD). Once world travel is opened up properly again I might be inspired to upgrade the laptop to all-SSD.

Samsung is hoping to address the consumer SSD storage crunch issue in a big way, shortly, if a premature Amazon listing can be relied upon for such indications. Tom's Hardware spotted a couple of previously unannounced Samsung QVO SSDs listed on the famous etail site. The Z-77Q8T0B/AM and MZ-77Q1T0B/AM, were described as 8TB and 1TB models, respectively, and are previously unknown models. The listings have since been removed. 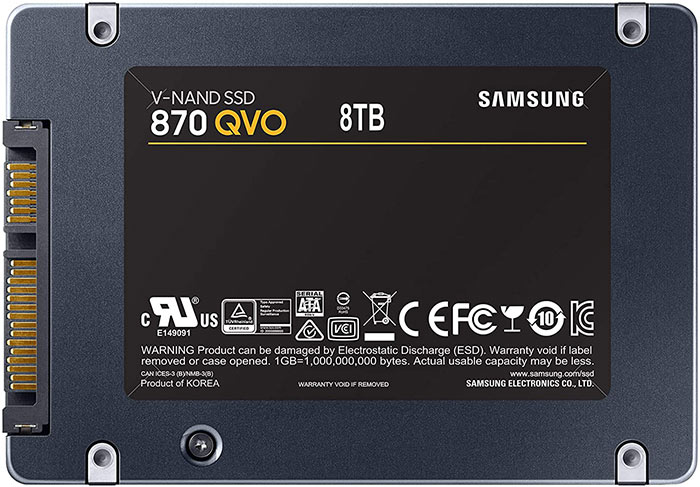 According to Samsung's existing naming convention these new drives will use the company's latest QLC (Quad-Level-Cell) V-NAND. That should be faster than existing 860 QVO series SSDs but remember these will be on the comparatively slow SATA interface anyway. QLC packs in more data per cell which can impact performance and durability too. However, a primarily read-based workload in a non-critical activity like gaming is a fitting application for this tech.

The 1TB Samsung QVO SSD was listed at US$130, while the 8TB model was listed at $900. The larger one is better 'value' but a big outlay if only for a gamer or hobbyist. The Amazon listings indicated an availability date of 30th June (1TB model) and 24th August (8TB).

Posted by Jonj1611 - Wed 10 Jun 2020 14:30
It's games that are keeping the mechanical drives in my system. To replace them with SSD I would need 4TB SSD and thats a bit beyond my price point right now.

I've found 2TB to be a really nice sweet spot; I can keep a load of games on SSD, and rotate any out that aren't being played. I'd *like* to have more SSD space, but at this point it's more convenience than necessity, and in these times, I ain't got convenience (nor necessity for that matter) types of money.
Posted by Hoonigan - Wed 10 Jun 2020 16:20
8TB? Nice! That's nearly enough to install Forza Motorsport 7 and Call of Duty: Warzone!
Posted by DevDrake - Wed 10 Jun 2020 17:05

Yeah game sizes seem to be getting a tad excessive for what you actually get in return in a lot of cases… I do blame a lot of the ‘bloat’ on poor optimisation and unnecessary/left in code etc.

I installed gta5 (got it for free like many people and in all honesty kind of glad I didn't buy it) and it came in around 80GB with all the other junk it came with (rockstar launcher which basically just sends me back to epic launcher….) I'm dreading cyberpunk 2077, thats already saying 80GB on release so I'd hate to see what will happen with ‘day 1 patches’….

I'm now coming into that ‘upgrade window’ and in all honestly I'm looking at using a hard drive based nas for longer term storage of ‘work’ stuff and then using multiple 1TB ssds in my pc purely due to not being a ‘heavy’ gamer but still having come to enjoy the boost an ssd gives in day to day use.

Also I'm not sure I'd want to risk using a single 8TB drive either (hd or ssd), so in all honesty I'd need 2 drives for a mirrored set up because ssd's don't have the same signs as hard drives when they start to fail.