This time last week, HEXUS reported upon the slightly underhanded way in which storage giants such as Seagate and Western Digital had introduced SMR technologies into their consumer product lines. Both firms were found to have introduced SMR-based HDDs into their traditional CMR HDD storage portfolios, rather quietly - but there are some inherent drawbacks to the areal density improving tech that makes SMR less suitable in certain use-cases.

At the time of writing the news report last week, both Seagate and WD had already made their initial responses known. Both initial statements were pretty bland, and basically said that the drives under the spotlight were suitable for the advertised uses in the markets in which they were sold.

Fast forward into this week and WD has published a blog with a more sympathetic response. Importantly it pledges to be clearer with regard to what products use what kinds of recording technologies. Furthermore, WD says it will update all the promotional literature and provide benchmarks of its HDDs in various use-cases.

On Monday WD explained that for its consumer products that it doesn't "always talk about what's under the hood". However, all products, such as its WD Red HDDs aimed at small businesses using NAS systems, are "rigorously tested… and validated by the major NAS providers". WD says that SMR is a "tested and proven technology," which has been continuously advanced - but it might not be optimal for every workload.

In an update on Wednesday, WD delivered some greater clarity and was rather apologetic about its previous less-than-clear communications. "Your concerns were heard loud and clear," it added to its blog, and it presented a table (above) and downloadable PDF (screen shot below) making it eminently clear which products are CMR and which use SMR technology.

"We're committed to providing the information that can help make an informed buying decision for as many uses as possible. Thank you for letting us know how we can do better," said the WD blog post. "We will update our marketing materials, as well as provide more information about SMR technology, including benchmarks and ideal use cases." 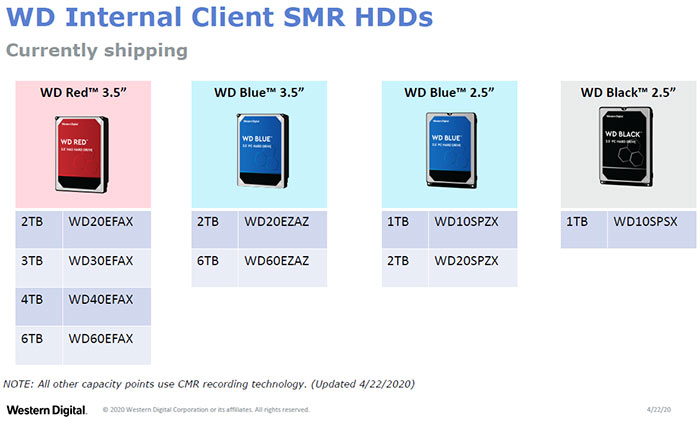 Last but not least, WD asked anyone with performance or other technical issues with any of its drives to get in touch with customer support, promising that "we will have options for you".

Posted by Tabbykatze - Fri 24 Apr 2020 11:19
They should also do a replacement program for the Customers who have made purchases but do not wish to have an SMR drive when they were expecting a CMR drive.

I don't think they should get away with this “subtle” change.
Posted by LSG501 - Fri 24 Apr 2020 11:52
The WD blue column on that table, arguably the most purchased branding, doesn't exactly clear things up lol….

Also wouldn't mind knowing about their enterprise HGST ultrastar range.. I know it has smr in the branding on the larger (14-20TB) drives but it doesn't say anything on the lower size drives.
Posted by watercooled - Fri 24 Apr 2020 12:13
I mean the whole thing is a bit bizarre but a WD Black drive too? Seriously?
Posted by huggi - Fri 24 Apr 2020 13:46
I'm surprised that they introduced SMR into their Red range which are meant for NAS use. Last time I checked, SMR drives seriously hindered RAID rebuild times because once their initial burst write from their cache wears off, the write speeds dropped significantly to the tens of megabytes per second range.
I guess it's a good thing my FreeNAS build is using Seagate Ironwolf drives. I mean, they were cheaper than WD Reds at the time but they're more expensive now and it looks like I now know why the Reds have gotten cheaper…
Posted by SHSPVR - Fri 24 Apr 2020 14:16
Well being that WD has more balls then Seagate who still lying out there teeth by call it TGMR when it really just SMR which are very bad for steam game library I know I have 8TB Barracuda with error, may my next drive will be an WD