Asus has unveiled its Hyper M.2 X16 Gen 4 card at CES 2020. As you will have already guessed from the name this is an add-in card for storage expansion. Extra/flexible storage expansion options are always useful, however the most interesting thing about this card is the potential data transfer speeds it can facilitate.

In its EdgeUp blog post about the Hyper M.2 X16 PCIe Gen 4 card Asus includes a pre-amble about the bandwidth that is available to RTX40 chipset motherboard / Ryzen 3000 CPU users. An abundance of double bandwidth PCIe 4.0 lanes is available to users of this AMD platform and Asus says that its new add-in-card is one way to "tap into the incredible bandwidth of PCIe 4.0," and create a super fast storage sub-system. 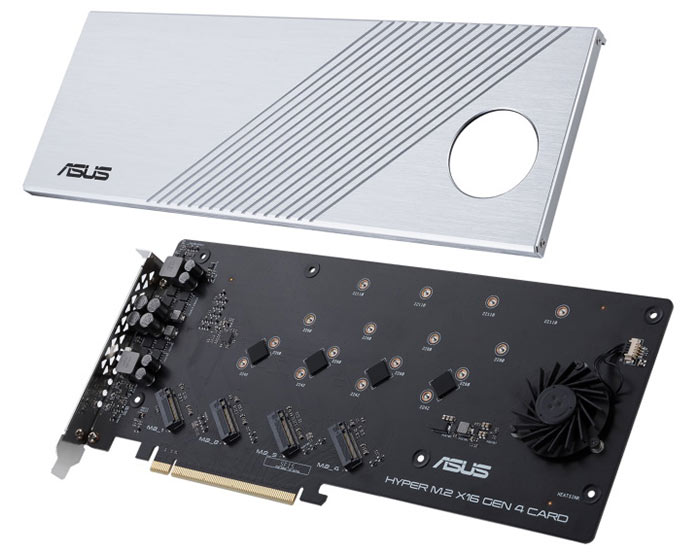 In essence the Asus Hyper M.2 X16 PCIe Gen 4 card offers four M.2 slots, each with four lanes of PCIe 4.0 connectivity. For flexibility the four diagonally positioned slots can fit M.2 cards in 2242, 2260, 2280, and 22110 form factors (first two digits are the width, and the following digits indicate length in mm).

Asus's card supplies up to 14W power to each M.2 SSD on board which is enough for them to run "at full potential" according to the PC, devices and components maker. And, for example, Asus says you could populate the card with four 2TB PCIe 4.0 SSDs, set up a RAID 0 configuration, "and enjoy massive 8TB storage array able to communicate using up to 256Gbps of potential bandwidth". It claims this performance is 4x a single PCIe 4.0 SSD and as much as 8x faster than the currently mainstream PCIe 3.0 SSDs.

Sometimes SSDs can throttle if heavy activity causes overheating, so Asus has included a blower fan in the new card, as well as thermal pads for your installed drives to make contact with the large brushed aluminium shroud. A dip switch is available on the fitting bracket if you can do without the active cooling. Also you will find four activity LEDs present on the bracket.

Last year, at Computex in June, Gigabyte showed off a very similar card called the Aorus AIC Gen4 SSD. It was claimed to offer sequential read/write speeds at 15,000/15,000MB/s, and its cooler looked more substantial - said to include a "copper thermal solution". This AIC launched in November. Inside the Aorus card you can see the arrangement of M.2 slots might be better than the new Asus product for active fan cooling air flow.

Microsoft DirectStorage for Windows works on PCIe 3.0 SSDs PC storage prices soar in HK due to Chia cryptocurrency QOTW: Do you use any PCIe slot other than primary x16? Asus ROG Swift PG32UQX 4K mini LED monitor due in May QOTW: Who makes the best motherboard BIOS?

Posted by Kanoe - Mon 13 Jan 2020 13:07
Interesting that they have changed the layout from the previous version.

Helps keep the Trace paths short from the connector to the drives at the expense of having a good air path for the fan.

I do run mine (the previous version) without the fan going and it still seems to be cool enough to maintain drive performance.
Posted by Tunnah - Mon 13 Jan 2020 15:48
Although these say they'll run at 16x, I wonder how many people even have a second 16x slot that runs at full speed. Although tbh, even though my second only runs at 4x, this would still be worth it just to have 4 drives in such a tiny package (giggidy)
Posted by chinf - Mon 13 Jan 2020 17:24

Tunnah
Although these say they'll run at 16x, I wonder how many people even have a second 16x slot that runs at full speed. Although tbh, even though my second only runs at 4x, this would still be worth it just to have 4 drives in such a tiny package (giggidy)

To be fair, the article (and the blog it references) talk about TRX40 (Mark might want to correct his typo) which will have multiple x16 lane PCIe 4.0 slots. The abundance of PCIe expansion will continue to be a key differentiator between mainstream and HEDT platforms, and if you already need such storage bandwidth, you'll already be wanting HEDT.
Posted by Tunnah - Mon 13 Jan 2020 17:34

chinf
To be fair, the article (and the blog it references) talk about TRX40 (Mark might want to correct his typo) which will have multiple x16 lane PCIe 4.0 slots. The abundance of PCIe expansion will continue to be a key differentiator between mainstream and HEDT platforms, and if you already need such storage bandwidth, you'll already be wanting HEDT.

Oh it's definitely a want rather than need. But I disagree, storage hogs like myself don't need to move to HEDT, as this, combined with the abundance of SATA RAID cards out there, leave plenty of options without having to fork out for a whole new platform. But ya, those that have a NEED for 16x M.2 drives in RAID0 most probably have a HEDT need to go along with it!
Posted by MRFS - Mon 13 Jan 2020 22:33
This is such a healthy evolution for storage in general. I can remember as far back as 10 years ago, when we started harping on the need for storage vendors to harness the upstream bandwidth of x16 mechanical slots. The upstream limit imposed by Intel's DMI channel was another clear motivation for giving SSDs direct access to the CPU. Along came “4x4” AICs and the requisite “bifurcation” in the motherboard's BIOS subsystems. PCIe 4.0 doubled the clock rate to 16G and that one change in the standard has clearly given an enormous boost to these “4x4” AICs. Lastly, I checked yesterday in a few QVL documents, and the very latest AMD chipsets are said to support auto-detection of these “4x4” AICs. The one natural evolution that appears to need attention is native motherboard support for all modern RAID modes on all integrated M.2 ports. This support for all modern RAID modes became an industry standard with integrated SATA ports, so it's only a matter of time for M.2 NVMe ports to have the same general support for all modern RAID modes, particularly bootable RAID arrays.