Samsung has officially announced that it has begun mass production of 512GB embedded Universal Flash Storage (eUFS) storage solutions. An industry first, these capacious storage components are fabricated from eight 64-layer 512Gb Samsung V-NAND chips plus a controller chip in a package as pictured below. With the introduction of this new storage solution Samsung has doubled the density of its previous 48-layer V-NAND-based 256GB eUFS (yes, the total component volume remains the same but it offers twice the storage capacity). 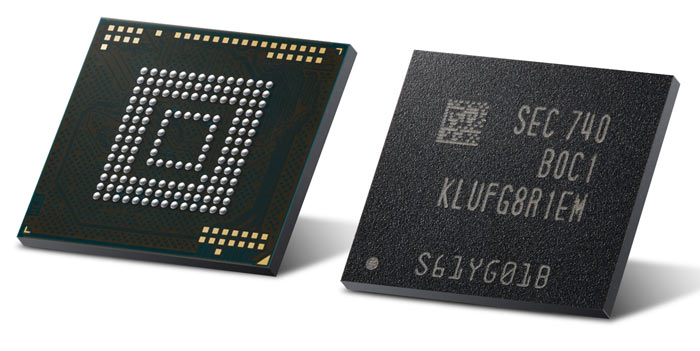 Next generation premium mobile devices will be targeted for adoption of the first run of 512GB eUFS storage solutions. Samsung said the mass production schedule will ensure planned launches of next-generation mobile devices should happen on time. Perhaps it's got an eye on CES 2018 in January and / or MWC 2018 which spans Feb and March next year. We also expect to see the rollout of Samsung's own 2018 flagship Galaxy S9 devices at that time.

Having a smartphone with 512GB of fast storage on board would certainly reduce the propensity for users to pine for SD card expandability. Samsung says that its fast eUFS storage is perfect for next gen devices which could bump into "potential limitations in system performance that can occur with the use of micro SD cards".

The capacity of the new eUFS drive is up there within its name, but what of the performance on offer? Samsung describes the 512GB eUFS performance as strong with internal testing revealing sequential read and write speeds reaching 860MB/s and 255MB/s respectively. In practical terms that means you could copy a "5GB-equivalent full HD video clip to an SSD in about six seconds, over eight times faster than a typical micro SD card". In terms of IOPS, Samsung quotes reads of 42,000 IOPS and writes of 40,000 IOPS - hundreds of times faster than a conventional microSD card, says the South Korean tech giant. This means the eUFS storage will be adept at multimedia experiences that rely on high-bit rate media, great for burst photography, and be capable of high resolution movie recording without any issues.

Samsung didn't provide power consumption figures but says this metric was carefully considered in the design of the new 512GB eUFS. It cites an advanced circuit design and new power management technology used to minimize the energy consumed by this capacious storage device.

When will the first devices packing Samsung's 512GB eUFS storage launch? As touched upon above, it sounds reasonable to expect such devices early next year with mass production underway already.

Lineup for performance, mainstream and value SSD applications. For up to 7,400MB/s reads.

Deal includes NAND memory and storage but Intel will keep a hold of its Optane business.

Continued falls through Q1 2021 could result in big brand 1TB SSDs selling for under £50.

Posted by philehidiot - Wed 06 Dec 2017 10:37
I'm one of those pricks who is always going to want an SD card slot, regardless of how much on board there is. This is because I occasionally use my phone for editing video which comes out of the camera on a micro SD. Phones are becoming more powerful with greater potential but less versatile as more and more connections are removed.

I charge whilst listening to music / youtube almost every day and so the extra connections that they seem hell bent on removing are essential for me. I think the SD card slot should remain for a few reasons, including redundancy for crucial files. If I have something really important and I'm possibly going to be working on it somewhere where 4G signal is dodgy, I'm gonna want a local copy but if it's that crucial I'll want to store it in two places, one of these being the SD card and one on the phone. Additionally, if you can just pop out an SD card, you can hand someone that huge video file a lot quicker than you can send it.

It all depends on how you use your phone but I much prefer a decent amount of storage for apps and SD on top. More features / connectivity options = more better.

Actually, thinking about it, in the land of the dongle can you plug a card reader into USB-C on mobiles? Or a USB memory stick (obviously with some kind of adaptor)?
Posted by iworrall - Wed 06 Dec 2017 11:59

philehidiot
Actually, thinking about it, in the land of the dongle can you plug a card reader into USB-C on mobiles? Or a USB memory stick (obviously with some kind of adaptor)?

See https://www.kingston.com/en/usb/personal_business/DTDUO3C
Posted by Xlucine - Wed 06 Dec 2017 12:09
How about a battery powered wireless card reader, with a bit of storage to boot?
https://hexus.net/tech/reviews/storage/91730-asus-travelair-ac/

Personally, I just use my SD card for music so more installed storage would remove my need for an SD card