Rivet Networks has announced enhancements to its Killer Intelligence Engine (KIE) to "deliver the strongest Wi-Fi connections," available at your location. We saw KIE tweaked last summer when the Killer E2600 Gigabit Ethernet Controller was introduced. This latest set of enhancements are targeted at Wi-Fi users, as mentioned above, but can work in concert with Wi-Fi/Ethernet enhancement tech from Rivet such as Killer DoubleShot Pro, and the Killer Prioritization Engine. 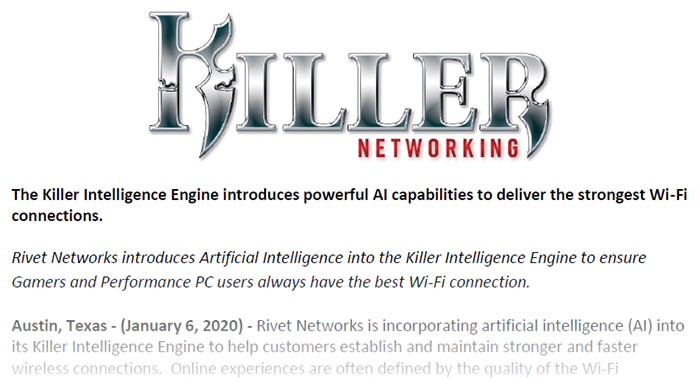 So, what is new about the KIE? The Engine now makes adjustments to your connection parameters after using AI analysis. Rivet told HEXUS that the following process takes place to ensure the best possible Wi-Fi connection to your Killer Networking equipped product:

The above means that the new feature relies upon multiple Wi-Fi access points (APs) being available to you as a user in the location where you are connected. The engine can also recommend Wi-Fi upgrades to boost network performance for all users.

According to a press release sent to us by Killer ahead of the opening of the CES 2020, the new KIE can "reduce latency by up to 50 per cent and increase throughput by over 100 per cent". However, those stats don't come with any footnotes, so should be taken with a pinch of salt or two.

In the wake of one of Rivet's announcements there are usually a good number of new gaming laptops/desktops launched featuring its latest technologies from partners like Acer, Alienware, Dell, Gigabyte, Lenovo, MSI and Razer. It is worth checking our third party reviews of these new products to get a handle on how much the networking performance is improved in the real world.

Posted by Tabbykatze - Mon 06 Jan 2020 17:45
Snake oil, now with AI!
Posted by Taniniver - Mon 06 Jan 2020 22:34
Y'know, I've got a killer NIC on my current motherboard, and the software suite really does make a useful difference in some scenarios, like if you are trying to do online gaming, torrent downloads and streaming at the same time.

It's hard to defend Rivet Networks from the accusations that their products make no difference though when their marketing people keep coming out with b******t like this.