The state of play in the world of broadband has been charted in the latest research update by cable.co.uk. The UK based telecoms comparison service has analysed and compared 1.1 billion broadband speed tests conducted across 224 countries worldwide to formulate its 2021 Worldwide Broadband Speed League tables, charts, and highlights. A PDF summarising cable.co.uk's findings has been made available, as has an associated Excel file of the results, for further analysis.

Out of the 224 countries in the survey, the UK comes 43rd, with a mean download speed of 51Mbps. With a download connection operating at this speed, a broadband user would need 13mins 16sec to download a 5GB movie. The UK has climbed up from position 47 last year, when our average download speeds were quite a lot slower at 38Mbps. However, other countries have been progressing at a more impressive rate, as the UK was placed at position 34 in the 2019 survey. 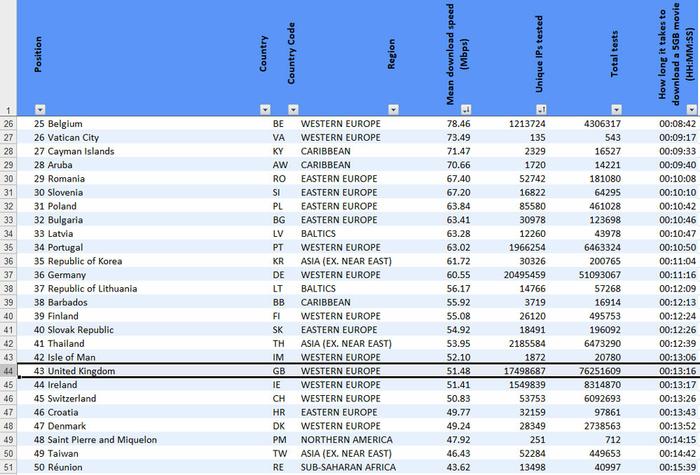 Comparing the UK against the rest of Western Europe doesn't make the country look particularly good. In this comparison, we are placed 20 out of 29 countries. However, Western Europe is one of the strongest identifiable regions, with eight of the top ten fastest countries in the world for broadband. The average download speed for Western Europe is over 90Mbps.

Some of the smallest 'countries' in Western Europe earn top merits for broadband. Cable.co.uk notes that the self-governing dependency of Jersey offers the fastest broadband in Europe (and in the world) with an average speed of 274Mbps. Hot on its heels are Liechtenstein (211Mbps), Iceland (192Mbps), Andorra (165Mbps) - and Gibraltar (151Mbps) makes the top five, too. Jersey is the first jurisdiction in the world to make pure fibre (FTTP) available to every broadband user.

So, we have seen a good few years of solid progress globally, but the acceleration of the fastest countries looks like it is going to stall, the biggest reason being that the best rated countries for broadband are starting to reach FTTP market saturation.

Posted by Friesiansam - Wed 15 Sep 2021 15:32
That some of the poorest countries in the EU, have significantly higher average broadband speeds than us, speaks volumes for the Tories failure since 2010, to live up to their promises of fast broadband for all and, for the complete nonsense that is Bozo's “levelling up” policy.
Posted by KultiVator - Wed 15 Sep 2021 15:51

Friesiansam
That some of the poorest countries in the EU, have significantly higher average broadband speeds than us, speaks volumes for the Tories failure since 2010, to live up to their promises of fast broadband for all and, for the complete nonsense that is Bozo's “levelling up” policy.

In the UK we're just way too laid back (or weary of BS) regarding politicians failed attempts to keep their promises… we should maybe take a leaf out of the French playbook and burn sheep in the streets - weird hobby, but if it works, who are we to knock it?
Posted by Caimbeul2000 - Wed 15 Sep 2021 15:54
Slower than the vatican…
Posted by maxopus - Wed 15 Sep 2021 17:54

Caimbeul2000
Slower than the vatican…

The pope hates his porn to buffer.
Posted by Gentle Viking - Wed 15 Sep 2021 18:11
The only reason Denmark dont do better, is some are cheap bastards that will “settle” on a moderate speed, i know a guy that have 30/30 mbit on fiber, for next to nothing more he could get gigabit.
Okay i also sort of understand the guy, he really dont do much on the internet, he even still get his TV via antenna.
It do however seem like the ISP that offered 5/5 gbit speeds, well they are gone / changed name, and get massive bad ratings.
That is too bad i was hoping for 5/5 gbit when i get new apartment and get back on fiber again, i just hate my 1000 / 100 mbit connection, or at least the 100 part of it.

I think it is about 9 years since my DL speed have been under 300 mbit, it have been gigabit for at least 7 years.