Gigabyte Aorus launched a couple of interesting new gaming monitors taking rather different approaches, for different gaming market segments. The headlining monitor, the Aorus CV27F, has a 'super immersive' curvature of 1500R, and uses a 27-inch FHD VA panel with 1ms (MPRT), 165Hz refresh rate and FreeSync 2 HDR tech. The second monitor launched just ahead of the weekend is the flat screen Aorus KD25F, made for FPS gamers and boasting a 24-inch TN panel with a response time of 0.5ms (MPRT), along with a 240Hz refresh rate. Both these monitors are dubbed 'Tactical monitors' by Gigabyte as they ship with a common set of special gaming and multimedia features. 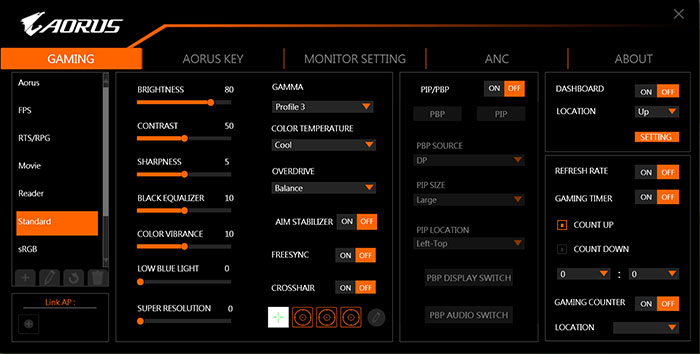 This 27-incher has a pronounced 1500R curvature. According to Gigabyte this feature delivers greater immersion as "1500R is more similar to the natural curve of the human eye". Other compelling features of this 27-inch FHD VA display are; 1ms (MPRT) response time, 165Hz refresh rate, along with 90 per cent DCI-P3 and 8 bit colour, 400cd/m2 max brightness, 3000:1 contrast ratio, AMD Radeon FreeSync 2 HDR technology with low framerate compensation. 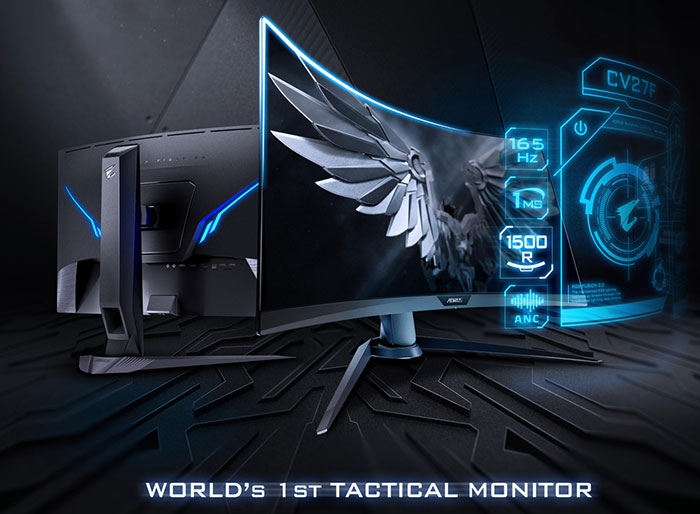 Gigabyte supplies the Aorus CV27F with a stand that provides a range of height, tilt, pivot, stroke, and swivel adjustments. RGB lighting is featured in a wing shape on the back of the monitor. Furthermore, it is good to see the power supply built-in, so there isn't a bulky adaptor dangling somewhere. For port choices you have 2x HDMI 2.0 and 1x DP 1.2, plus 2x USB 3.0. You can charge your phone (5V/1.5A) from this monitor too. An official product page with full specs is available now.

This traditional 24-inch monitor goes all-in on speed. It is claimed to offer a response time of 0.5ms (MPRT), along with a 240Hz refresh rate via its FHD TN panel. Gigabyte is quick to address image quality concerns that are often a knee-jerk response to those two letters (TN). It says that the Aorus KD25F features a 100 per cent sRGB gamut "which is really rare for a TN panel". Max brightness is 400cd/m2, and contrast 1000:1 typically. 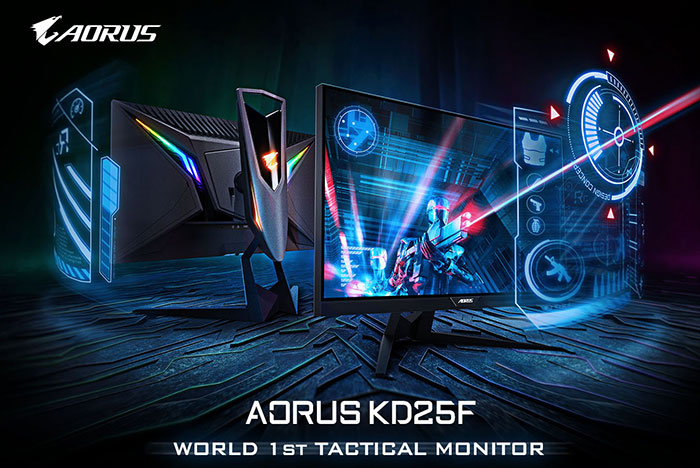 Moving on to other features, the KD25F shares the same design as the "World's First Tactical Monitor AD27QD" with digital LED lighting, the full function stand, frameless design, a built-in power board, and more.

The Aorus KD25F supports 2x HDMI, 1x DP, 2x USB 3.0, (again with USB charging), a microphone jack and an audio jack. If you are interested, please check out the official product pages, and specs pages.

is it really that bad though? I've got a 1440p and was legitimately thinking of perhaps going back down. Kind of makes me sad that I can't get stable fps in some games, kind of makes the upgrade of a GPU less frequen as well no?
Posted by Friesiansam - Mon 03 Jun 2019 12:06

Does anyone outside marketing departments really believe that, on a 27" monitor?
Posted by philehidiot - Mon 03 Jun 2019 12:13

is it really that bad though? I've got a 1440p and was legitimately thinking of perhaps going back down. Kind of makes me sad that I can't get stable fps in some games, kind of makes the upgrade of a GPU less frequen as well no?

I know someone who got a 1080p 27“ and decided it was a mistake. My personal limit is 24” for 1080. I currently run 27“ 4K which you might say is pointless however once you've been spoiled by high PPI mobile phone and tablet displays, you start to notice just how pixelated standard resolution monitors are.

Another thing I've noticed is that displaying non native resolutions has got loads better since the early days of LCD so it may be worth trying 1080p on your existing display and seeing how it looks. It must be said, it does very much depend on what you're viewing. Fast paced games with loads of movement are less likely to suffer in my experience.

At the end of the day, when all is said and done and when the clichés have all been thoroughly abused…. it's all subjective anyway. It doesn't matter that I would notice the large pixels on a 27” 1080p display and that it would get to me if you don't notice it and it doesn't bother you. All it means is you have saved yourself some cash.
Posted by DanceswithUnix - Mon 03 Jun 2019 13:39

zaphod159
is it really that bad though? I've got a 1440p and was legitimately thinking of perhaps going back down. Kind of makes me sad that I can't get stable fps in some games, kind of makes the upgrade of a GPU less frequen as well no?

I'm surprised, do you have Freesync or Gsync?

I must admit I went 27" 1440p more for work than for gaming as I can cram an awful lot of text on screen, but it does make games look pretty.