An actual photo of an Intel LGA1700 socket has been shared on Chinese social media platform Bilibili (via VideoCardz). This is the first time we have had such a photograph, rather than a render or diagram, of the upcoming consumer desktop PC motherboard socket.

LGA1700 is the socket design which has been prepared for the upcoming Intel Alder Lake and Raptor Lake desktop processors. There has been no solid indicative sign of what socket might be used for Intel 14th Gen Core processors (Meteor Lake). VideoCardz has taken the source image and positioned a photo of a current gen LGA1200 socket next to it for interesting effect. 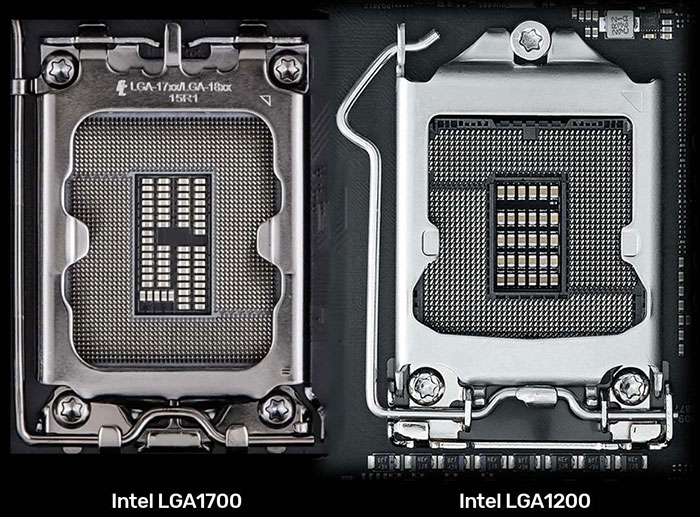 According to this picture, the new Intel LGA1700 and necessary processor securing assembly takes up little if any more room on the motherboard PCB than the LGA1200 socket. Largely due to Intel's rethinking of the latching system, the 45mm x 37.5mm LGA 1700 socket isn't any more of a PCB hog than the LGA1200 version. I've checked the scaling, taking the torx head flange bolts as a constant, and VideoCardz' image scaling seems to be spot-on.

It is interesting to see that the new socket retaining clamp is embossed with the following information: "LGA-17XX/LGA-18XX, 15R1". This suggests that there are 100 extra pins available for next gen CPUs with 1800 contacts – when or if this will be used it is hard to determine.

Intel's new rectangular chip/socket means we might see a bit of a shake-up in the cooler market. It is rumoured to be reengineering a line of reference/stock coolers to be ready for the release of ADL-S mainstream CPUs. We have also seen some of the bigger names in cooling assure users that existing models will be compatible, and will have new fixing kits made available for a fee or free – if necessary.

[GSV
Trig;304]That's a lot of pins to bend when you accidentally drop the CPU into the socket when building your own machine…

QuorTek
so Intel is finally making a socket that has a long lasting stand as AM4?

Don't be daft, Intel enjoys milking those who don't really know what they're buying? Why would they get rid of one of their little cash cows!