HEXUS enjoyed a hands-on preview of the EVGA SR-3 Dark at the firm's suite during Computex Taipei back in the summer. EVGA has just announced that it has started taking pre-orders for this top-end single socket E-ATX Intel C622 motherboard. The board was built especially for the Intel Xeon W-3175X and highlights include its hexa-channel memory support, 23 phase power design, 16-layer PCB, dual-10GbE LAN ports, and pre-installed VRM waterblock.

To recap on the use of this platform, the Intel Xeon W-3175X processor was released nearly a year ago costing just short of US$3000. It boasts 28 cores / 56 threads, a base clock of 3.1GHz with Intel Turbo Boost Technology 2.0 for frequencies up to 4.3GHz, an unlocked multiplier, up to 68 platform PCIe lanes, 38.5 MB Intel Smart Cache, plus support for 6-channel DDR4 memory, with a TDP of 255W. The processor has already been leveraged by some of the world's best overclockers and dominates the Time Spy Extreme world records hall of fame CPU scores tables, for example. If you look at the fifth placed entry in that link you will see that KingPin has already been working with an early model EVGA SR-3 Dark. 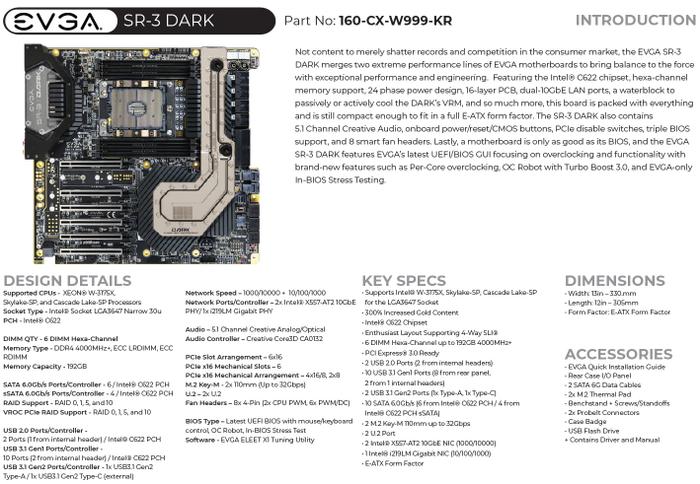 As you can see from the board images the 16-layer E-ATX sized PCB is crammed with expansion options and features. Flanking the high-gold content processor socket there are triple DIMM sockets enabling hexa-channel RAM configurations up to DDR4 4000MHz+ and 192GB. The six PCIe x16 slots present are individually switched (DIP switches) for easy trouble shooting and so on. In a similar vein there is a triple BIOS select, and a SafeBoot button further enhances advanced tinkering attempts.

At the time of writing there are few after-market coolers available for this chip/board. I can only find the EKWB's EK-Annihilator Pro and Asetek 690LX-PN that are compatible. Furthermore, the EVGA SR-3 Dark is only the third Xeon W-3175X compatible board available, alongside the Asus ROG Dominus Extreme and Gigabyte C621 Aorus Xtreme. 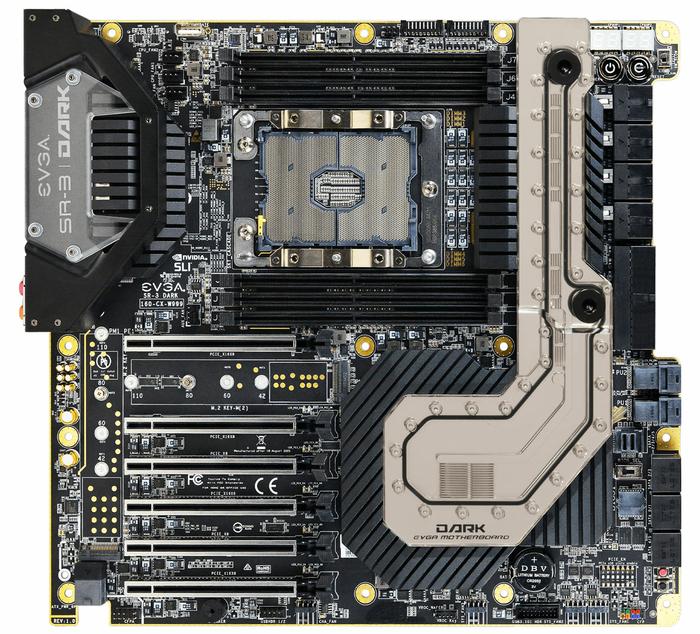 Of course the EVGA SR-3 Dark is somewhat on the expensive side of the market. It is listed at US$1,999 but with an instant rebate of $200 bringing the price down to $1,799 - expected to ship on 13th January 2020. There is a limit of two per household for pre-orders but it is currently out of stock.

Intel win the core count though, be nice to see benchies between the two, bang per buck has always been AMD's saving grace though.
Posted by Xlucine - Wed 01 Jan 2020 01:14

'[GSV
Trig;4163198']Intel win the core count though, be nice to see benchies between the two, bang per buck has always been AMD's saving grace though.