Samsung has just announced a sleek new convertible laptop called the Notebook 9 Pen (2019). These convertibles, available in white or blue, 13-inch or 15-inch form factors, come packing the latest 8th Intel processors and, as per name, a responsive silo-held S Pen. Other modern niceties include; face and fingerprint login options, twin Thunderbolt 3 ports, expandable PCIe NVMe storage, Gigabit Wi-Fi, and long battery life (up to 15 hrs). Samsung has a reputation for being able to make cutting edge slim and light devices and these all-metal plus aluminium frame designs indeed fit that bill. 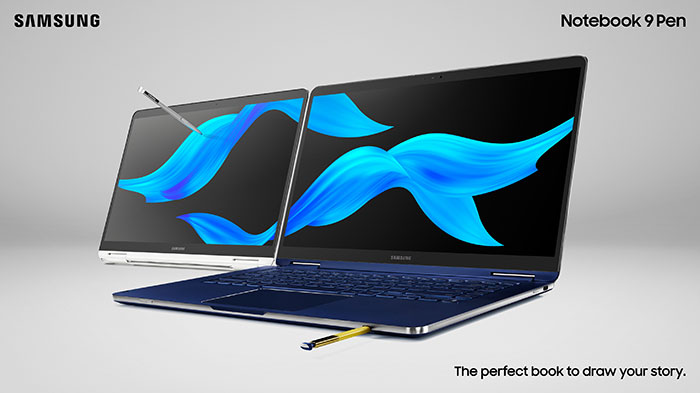 The aluminium frames of the Samsung Notebook 9 Pen convertibles feature an edge-to-edge diamond cut metal finish which sets off the dense Ocean Blue and Platinum White colour finishes available. Dimensions of the 13-inch model are 307.9 X 206.2 X 14.9 — 15.9 mm, and it weighs in at 1.12kg. Moving up to the 15-inch model the dimensions are 347.9 X 229.1 X 16.9 mm. The only other difference between these models (even the battery capacity is the same) is that the 15-inch Samsung Notebook 9 Pen comes with an Nvidia GeForce MX150 (2GB) and doesn't just rely on Intel's iGPU. 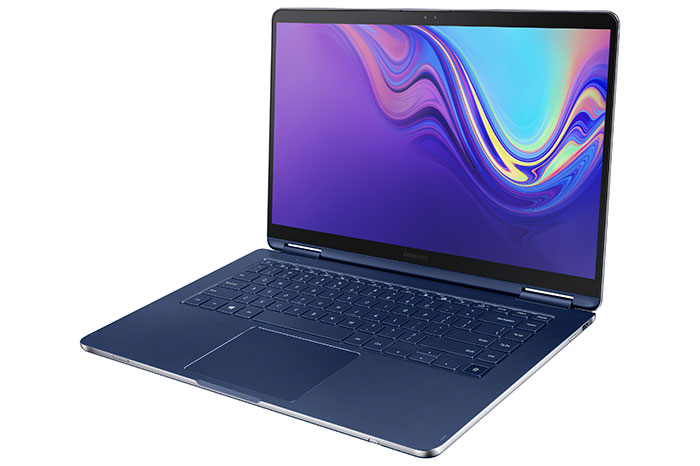 Inside these convertible laptops Samsung has installed an Intel 8th Gen Core i7 Processor, alongside 16GB LPDDR3 RAM, a 512GB PCIe NVMe SSD, a Gigabit Wi-Fi component with 802.11 ac wave2 2X2. Of course these are touchscreens - and work with the supplied stylus - both feature a narrow bezel 1920 x 1080 pixels display. Samsung's latest S Pen, which fits neatly away in the chassis silo under the wrist rest area, is said to have half the latency of the previous model. A suite of software tools, in addition to Microsoft's pen-friendly software, enhances the S Pen experience. Samsung's keyboard is backlit and the trackpad looks a decent size.

The following ports are present: Thunderbolt 3 (2), USB-C (1), HP/MIC, UFS & microSD Combo. Notebook 9 Pen computers can be logged into via fingerprint or facial recognition via the HD IR Camera. Samsung promises clear, pristine, studio-quality sound from stereo 5W speakers tuned by AKG and there is a new ThunderAmp smart amplifier inside.

The Samsung Notebook 9 Pen premium 2-in-1 PCs are available in S Korea today, and availability in USA, China, Brazil, and Hong Kong is promised for "early 2019".

Seems most people aren't that interested in the UK