Apple launched its refreshed MacBook Pro lineup just a fortnight ago. The range of laptops received a number of interesting updates; such as a TrueTone display, the new Apple T2 security chip, and a quieter more reliable keyboard. The greatest upgrade was, or should have been, the move to 8th Gen Intel Core processors with their greater core counts. 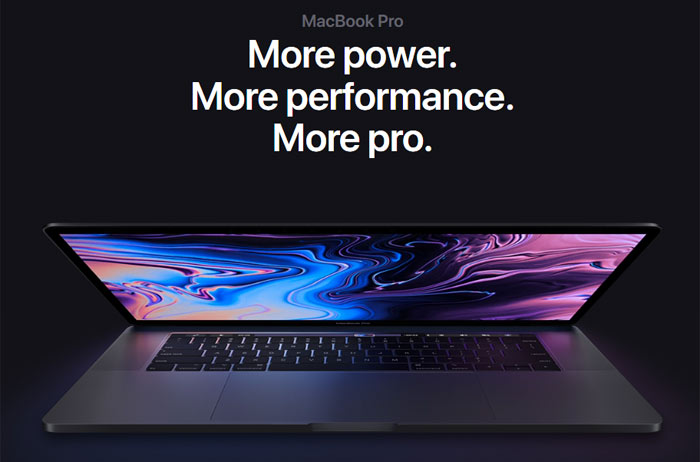 A few days after the updated MacBook Pros became available there was a ripple of controversy as it was discovered that Apple had created a physical dust ingress barrier over its problematic butterfly keyswitches. It had promoted them as quieter in the product reveal but an earlier patent reveals this was just a side effect of the silicone film designed to keep foreign particles from getting underneath them.

Talk of a new problem introduced with the 8th Gen Intel Core processor equipped MacBook Pros came after the publication of a MacBook Pro 15 range review video by popular tech YouTuber Dave Lee. Mr Lee warned "beware the Core i9" - it is a super expensive option, of course, and unfortunately it "runs hot and throttles harder than any of the MacBooks I've ever used". Follow up tests by other media came to the same conclusion. 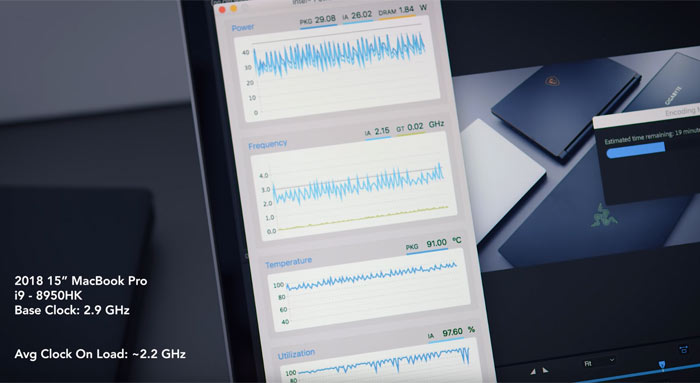 One might naturally go on to conclude that the thermal design of the Apple MacBook Pro chassis simply isn't up to the task of keeping the new Core i9 chip cool under stress. Dave Lee tested his model in a household freezer, which obviously helped out in this regard, and the result was a big improvement in Adobe Premier Pro render performance. 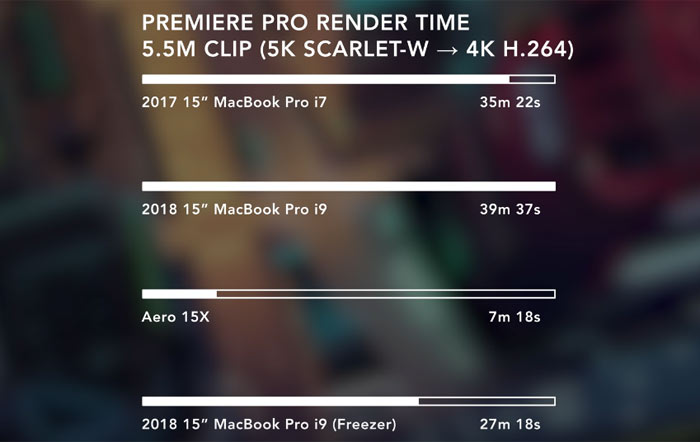 A significant hardware design issue would be disastrous. However, Apple has now issued a statement and a patch which it recommends for every new generation of the MacBook Pro, including both the 13-inch and 15-inch sizes and all of the Intel processor configurations. It claims that the patch supplies a previously "missing digital key in the firmware that impacts the thermal management system and could drive clock speeds down under heavy thermal loads".

In the full statement, shared by The Verge, Apple apologises for the sub-optimal performance customers have noticed. It then reminds us of the original launch claims that "the new 15-inch MacBook Pro to be up to 70 per cent faster, and the 13-inch MacBook Pro with Touch Bar to be up to 2X faster, as shown in the performance results on our website."

The patch is available now and Dave Lee has been quick off the mark to provide a short updated review video featuring just the Core i9 version of Apple's latest and greatest laptop (see above). In essence, in a new batch of Adobe Premier Pro render tests the MacBook Pro i9 after the patch works even better than the non-updated version did in a freezer. Overall it's about 30 per cent faster than last year's Core i7 equipped model, see below. 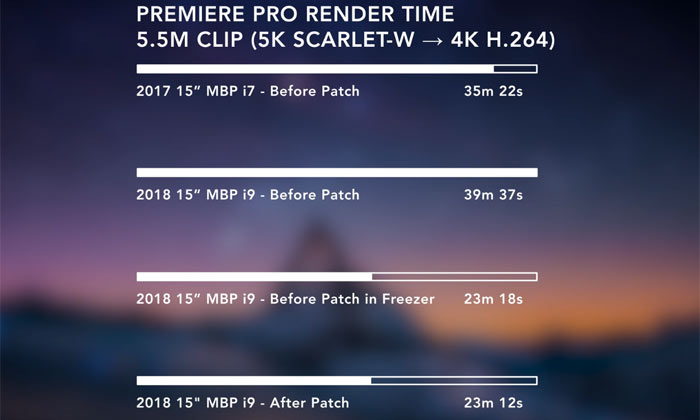 While all might now seem tickety-boo, Mr Lee reckons Apple could still do better with the cooling hardware in the top of the range MacBooks - to put up a better performance fight against PC vendors like Asus and Dell.

Posted by Platinum - Wed 25 Jul 2018 10:33
Looks like the Dell XPS 15 is throttling as well, Apple and Dell should have tested the chips more and sorted their cooling but I wonder if Intel is partially to blame, the i7 is fine and has the same TDP as the i9, is Intel telling porkies with the power draw?
Posted by Kanoe - Wed 25 Jul 2018 10:51
Would be interesting to get some more details about the patch, like does this just allow the chip to run hotter for longer before it starts throttling, which isn't much of a fix.
Posted by 3dcandy - Wed 25 Jul 2018 11:17
Is it just me or can anybody else not see the point of a laptop that is always throttling performance?
Posted by Platinum - Wed 25 Jul 2018 11:22
Ok looks like the Razer Blade throttles as well, interesting.
Posted by philehidiot - Wed 25 Jul 2018 11:36
I wrote a rant but it went astray. The description sounds like it just allows the chip to run hotter for longer. This is a bad idea as I found when I bought a laptop that had a desktop P4 in it… the CPU didn't cook but the surrounding components did and parts failed one by one. There is clearly a thermal design issue in that it was running at >90 degrees under load and it sounds like they've just changed the throttling parameters - you can't force the chip to run cooler. All you can do is run the fans faster for longer with a lower starting threshold and hope it compensates. I suspect there are two issues going on here. Firstly the marketing department wants to advertise an i9 and doesn't care if it throttles. Secondly the engineers will be well aware of the issues but told to shut up and get on with it. The lifespan of the laptop will likely be decreased by this patch as the CPU may be able to handle it but the extra thermal expansion and contraction of the surrounding copper tracks and components will likely cause a higher rate of premature failures as well as the possible extra wear on the fans (although I doubt this is a major issue - I've only ever replaced one fan in a laptop). My Macbook Air has an i5 in it and it throttles at the drop of a hat and it's very frustrating. It was clearly a marketing decision to drive sales. There's no point in sticking a giant engine in a car when the cooling, transmission, chassis etc can't handle it. All you get is bragging rights and an expensive repair bill when it all goes horribly wrong.