HEXUS previously reported upon Apple's admission of issues with its butterfly keyswitch mechanism in late June. The firm buckled under consumer pressure to offer free servicing and repair to all the laptops that have come packing these keyswitches since they were introduced. 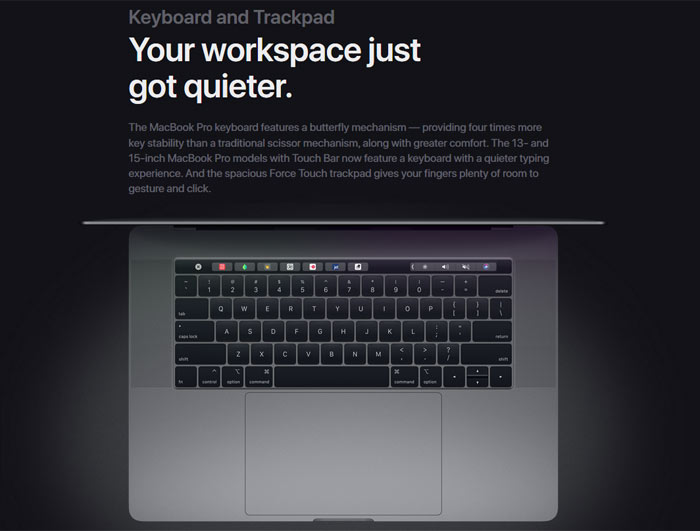 It turns out that Apple was just trying to put a positive spin on a fix for an awkward issue. iFixIt, famous for its meticulous tech tear-downs, was keen to check out the new improved keyboard. It said it was too excited to hold back this news for its full-analysis article so it published 'The great Apple keyboard cover-up' just ahead of the weekend. In the article it surmised that "Apple's new quieter keyboard is actually a silent scheme to fix their keyboard reliability issues." Another respected tech site, Thurrott.com, reckons the silicone membrane is a "lousy attempt," at fixing the keyboard issues. 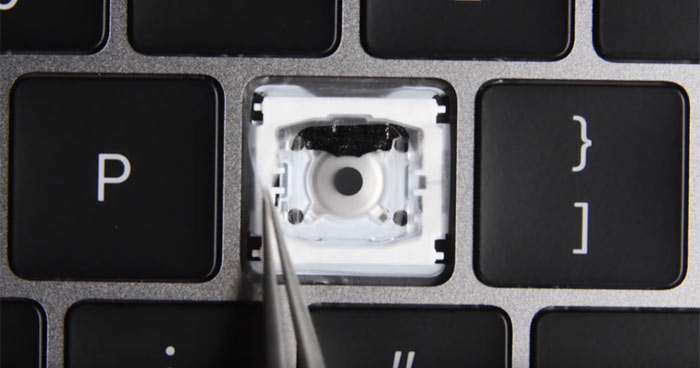 As you can see above, Apple has covered up the main part of the butterfly switch mechanism with a thin silicone barrier. Apple had previously patented technology designed to "prevent and/or alleviate contaminant ingress." However, coinciding with the new MacBook Pro launch, Apple told The Verge that "this new third-generation keyboard wasn’t designed to solve those [dust] issues." That seems like a legal/political spin on the true intentions.

It will be interesting to find out if Apple has actually solved the dust ingress issue. For that to be seen in real life usage tests might take several months. One wonders how long this membrane will last, too. iFixIt will put the updated keyboard through some ingress tests later this week, it has promised.

Posted by TheAnimus - Mon 16 Jul 2018 11:21
I still don't get why people buy Apple, they know they've a problem, they don't acknowledge it and now you have to gamble that they've actually done something that might have fixed it based on 3rd party speculation.

TheAnimus
I still don't get why people buy Apple, they know they've a problem, they don't acknowledge it and now you have to gamble that they've actually done something that might have fixed it based on 3rd party speculation.

Why on earth would anyone drop thousands of pounds on that.

Easy. People with too much money or too little brain cell count.
Posted by qqukdbx - Mon 16 Jul 2018 11:56
It is not so complicated guys. For Apple speaks their reputation and an aura of exclusivity. One problem with the keyboard doesn't change a thing.
Posted by peterb - Mon 16 Jul 2018 12:17

TheAnimus
it based on 3rd party speculation.

peterb
Exactly - mere speculation. But if it has reduced noise and fixed the ingress of dust etc - its a win-win.

The problems, the fault, the issue isn't speculation.

The fact it might be fixed is. It could easily not be fixed.

It's the iPhone4 all over again where I was made to feel as if I was somehow wrong for saying everytime I go to pick it up, the call drops. As if I was somehow holding it wrong, when it fact it's utterly shoddy design.