Yesterday HEXUS reported on the curious case of the repurposed GA102-250-KD-A1 GPU from Nvidia. Found inside an RTX 3090 Founders Edition, it was expected that this GPU was one from a batch made for testing RTX 3080 Ti designs. At the end of that article I mentioned that the current best guess about if/when an RTX 3080 Ti would emerge was yes/probably May.

Twitter tech enthusiast @KOMACHI_ENSAKA unearthed a new regulatory listing from Gigabyte yesterday evening. The listing was with the EEC and the Tweeter highlighted that this time around the GPUs are all coming packing 12GB of VRAM. I say 'this time around' as Gigabyte RTX 3080 Ti GPUs were spotted at the EEC back in December but with 20GB of VRAM. This VRAM hokey-cokey ties in closely with the repurposed GPU story linked in the intro. It seems like Nvidia has been rather indecisive with positioning the RTX 3080 Ti, and has made at least three config changes that we know about up to this day.

Below are the 12 GPUs that Gigabyte appears to be preparing for markets in the EEC in an easier to reference form than the screenshot.

At the top of the list you can see Aorus Xtreme Waterforce cards in water block and AiO varieties. HEXUS regulars will also be familiar with the other Aurus versions, plus Gaming, Vision, Eagle and Turbo designs from the firm. All the no water-cooled samples are expected to be triple fan designs except for the Turbo family which is usually a single fan blower style card which might suite your system/chassis due to its design. 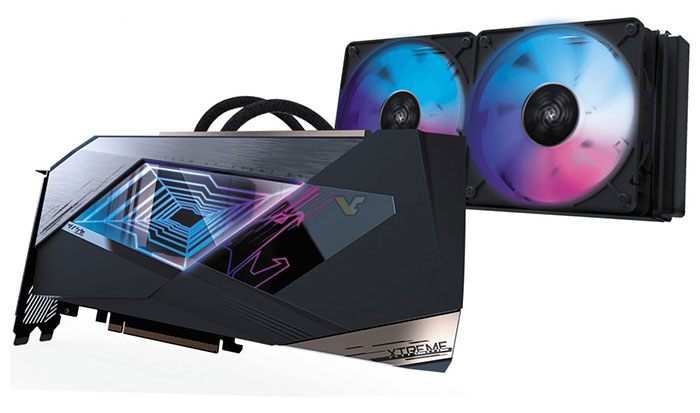 Using the latest info from above and the rumour mill, the expected key specs of an Nvidia GeForce RTX 3080 Ti are reckoned to be; 10,240 CUDA cores plus 12GB GDDR6X memory on a 384-bit bus. No word on GPU clocks as yet, or pricing. Whether Nvidia will continue with its ill-fated crypto nerfing attempts remains to be seen.

Interestingly, among the products in this EEC listing appears to be a Gigabyte branded Nvidia CMP 30HX model (GV-N30HXD6-6G) for crypto miners.

The vast majority of gamers need mainstream GPUs at mainstream prices. When you can barely get a GTX1050TI for under £200,its like announcing a new Ford GT40,in the midst of a shortage Ford Fiestas.
Posted by Glyce - Tue 30 Mar 2021 12:56
Miners must be happy with this new card they will bulk buy.
Posted by tazzrats - Tue 30 Mar 2021 14:36
Given the shortage I am actually surprised at how many SKUs this is!