Nvidia has announced a couple of interesting initiatives to try and clearly separate the awkward bedfellows of PC gaming and crypto-currency mining. First of all, with the release of the GeForce RTX 3060 GPU (12GB) on 25th Feb, the launch driver will detect crypto-mining activity and half the hardware's hash rate. Secondly, Nvidia has announced a range of GPUs to specifically address the needs of Ethereum mining. These new headless GPUs will be dubbed the Nvidia CMP (Cryptocurrency Mining Processor) line. Please read on to try and understand Nvidia's reasoning for the above decisions, and how it thinks it has closed any loopholes.

When the GeForce RTX 3060 12GB is launched the drivers that support it will automatically limit hash rate speeds. Obviously Nvidia doesn't want to disclose too much about how it detects mining activity and throttles it but it is said to be a driver side solution and Windows and Linux drivers will both limit hash rates. 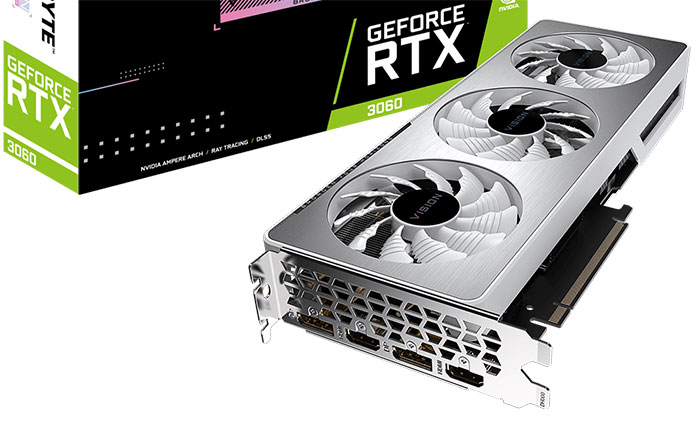 If this limiter sounds a little easy to hack or bypass, Nvidia has asserted in a follow-up communication with PC Gamer that "the software cannot be hacked to remove the limiter." It almost sounds dangerous to be so dismissive of the hacking community.

Another important point about the RTX 3060 launch drivers are that the newest GeForce drivers from that date won't affect GPU hash rates for GeForce hardware released previously. Such a retrospective nerf would not be as effective as miners, not interested in new gaming graphics features, could just use the older driver sets.

The proof of the pudding is in the eating, and we will see in the coming weeks and months if the RTX 3060 has much better availability and doesn't get hacked to enable its full ETH mining potential. The GeForce RTX 3060 12GB will become available starting 25th Feb.

The other half of Nvidia's pincer movement on crypto miners is to release a range of dedicated GPUs for pro miners, tuned for low voltage efficiency. You can read about the first four Nvidia CMP HX processors on the official product pages. The specs table is below, alongside a die shot of a CMP GPU.

Hopefully the CMP processors make financial sense to miners as they can't be repurposed for gamers later in their lives. They lack not just the outputs on the bracket but the necessary output support on the chip. Nvidia explains further that CMP GPUs "don’t meet the specifications required of a GeForce GPU and, thus, don’t impact the availability of GeForce GPUs to gamers."

Do HEXUS readers reckon Nvidia's RTX 3060 driver patching and launch of CMP solutions is going to make a difference to gaming GPU supply? Let us know your thoughts below.

I think those W ratings of existing cards are a bit out. Keeping to NVidia's rating for consistency, the 3080 is 320W, the 3070 is 220W and the 3060ti is 200W. Sure, you can undervolt them, but you might be able to undervolt these too.
Posted by harrisonm65 - Fri 19 Feb 2021 10:57
Dont worry - Ive 2 of those Gigabyte Vision cards and both have died. Ultimate perf nerf built right in from Gigabyte.
Posted by Corky34 - Fri 19 Feb 2021 11:01
While the nerf is appreciated it's not going to help the adoption of RTX, the performance hit from enabling RTX means it's really only something worth consider for high end cards (IMO), depending on the game I'm guessing a 3060 Ti struggles when RTX is enabled so that leaves 3070's and up and all of those will remain bad in terms of cost to performance all the while miners are willing to pay above MSRP.
Posted by kompukare - Fri 19 Feb 2021 11:45

These would be undervolted and underclocked as they are pretty close the whattomine's value.
Undervolting is silicon lottery of course.
Gaming stable voltages/clocks might not be mining-stable voltages/clocks though.
Someone stuffing a warehouse full of these will try to save very watt though.
Posted by LSG501 - Fri 19 Feb 2021 11:50
The only people this will really hurt are the people that want to do a little cryptomining (hopefully it won't affect other things that ‘look’ like mining) on the side on just one gpu, the big crypto farms will either buy the more expensive cards or find a work around pretty quickly imo. It honestly feels like a PR thing and a way for Nvidia to artificially inflate the prices of ‘dedicated’ hardware like they do quadro (no real difference outside ecc memory)

The real issue isn't the card being used for cryptomining it's about supply and purchasing. Supply is annoying but understandable in the current climate but the fact that scripts/bots are so easily grabbing up stock on websites, instead of even the most simple ‘pre-order’ with one per household type of thing, is the worst thing… and that's ignoring the ‘back alley deals’ that must be going on in some places for large purchases.