Nvidia has launched a new card into the RTX 30 desktop stack. The new GeForce RTX 3060 with 12GB GDDR6 was widely leaked ahead of the GeForce RTX: Game On event at CES 2021 but nevertheless it is good to see the official specs, as well as the host of partner designs, pricing and availability details that have become available.

The new RTX 3060 is key to Nvidia's ambition of bringing the "Ampere architecture to millions more PC gamers," and the firm is eagerly making comparisons to the hugely popular Pascal gaming GPU (as per Steam's stats), the GTX 1060. Thus Nvidia has felt comfortable using the RTX 1060 as the main reference point in its PR blurb and performance stats.

Of course the Pascal '60 comparison will be probably very welcome to some but many gamers and enthusiasts would probably like a more modern day reference point while waiting for third party reviews. So, I'm happy to report that Nvidia did provide an AAA gaming performance chart which included an RTX 2060 too. 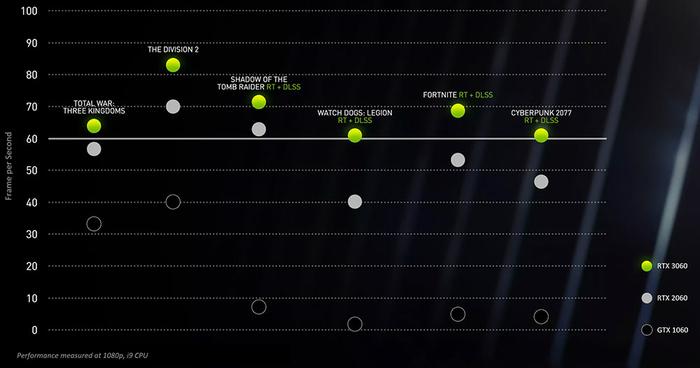 Since this chart its 1080p only it looks like this GPU is going to be pitched at AAA gaming at 1080p with RT and DLSS (four out of six selected titles use RT and DLSS). A quick guesstimate of the uplift compared to an RTX 2060, using this chart is to expect about a 12 per cent uplift on average. Note that the RTX 2060 Super was about 10-20 per cent faster than the RTX 2060 across a swathe of titles when it was launched.

So, what are the specs of the GeForce RX 3060 12GB? If you go to the official product page you will see that the new GPu is part of the RTX 3060 Family, and thus Nvidia has shared the table below with consumers: 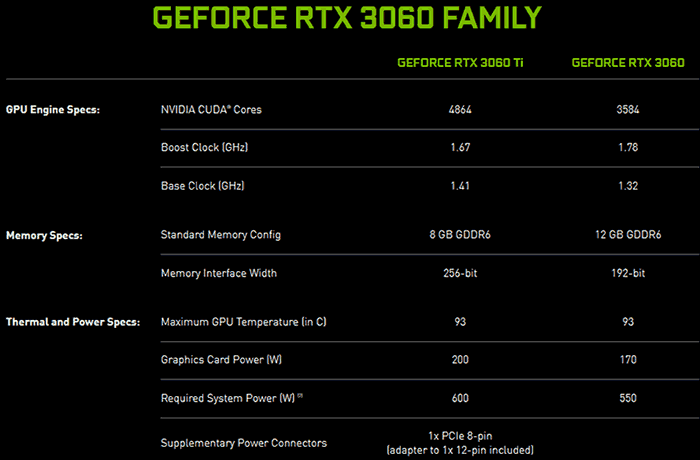 Nvidia says that its new $329 GPU will become available in late February.

Partner graphics cards from the usual suspects are already being announced. Gigabyte has launched four GeForce RX 3060 12GB models in its first wave, for example. It has triple fan Vision OC and Gaming OC cards, as well as a pair of twin-fan Eagle models in regular/OC clocks that it is showing off already. More to come on these and rival offerings at a later date. 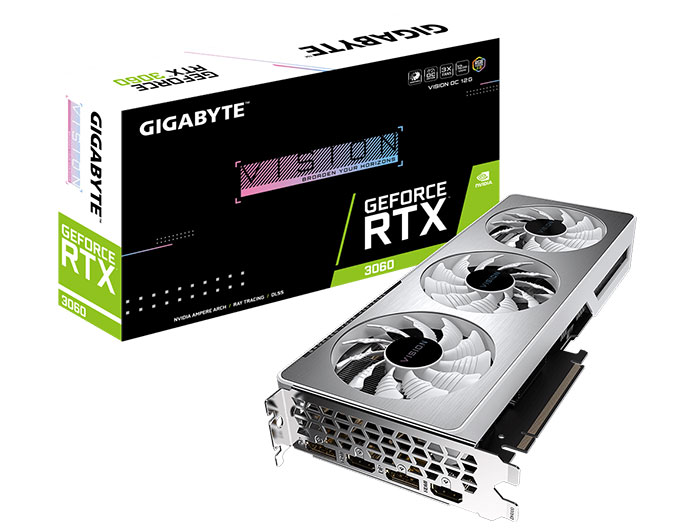 Wrapping up, the RTX 3060 12GB is pretty much as expected but we were hoping for some other cards to join it; like an RTX 3060 6GB version, an RTX 3080 Ti, and even some RTX 3050/Ti graphics cards.Furthermore, Resizable BAR PCI Express technology (like AMD SAM) has been introduced for its potential gaming performance boosts. Meanwhile, a decent range of RTX 30 Mobile GPUs for laptop making partners have been launched, as you will see in the next article.

Posted by kalniel - Wed 13 Jan 2021 08:44
While this will no doubt be popular, it looks like the smallest increase over the previous generation seen so far. That they felt they had to compare ray-tracing performance to a card which doesn't even have any hardware for ray-tracing speaks volumes. Nice to see 12GB VRAM though.
Posted by deepblue08 - Wed 13 Jan 2021 09:00
A bit useless to have a whopping 12GB of memory on a rtx3060 card since it will most likely be used for 1080p or 1440p resolutions. Even more surprising is that rtx3070 has only 8GB of memory.
Posted by Pob255 - Wed 13 Jan 2021 09:01
unfortunately more ram with reduced bandwidth is not always that helpful

the rtx2060 super was $399 at launch and going from the numbers given so far we're looking at something with similar performance for $329 would be good
I wonder if that price is before or after the new US tariffs? https://www.techpowerup.com/276858/gpus-to-see-price-increase-due-to-import-tariffs-other-pc-components-to-follow