Yesterday was a big day for AMD as it unveiled the first graphics cards based upon the RDNA 2 architecture. I'm sure most of you will have read and thoroughly digested the HEXUS editor's analysis and views on the Radeon RX 6000 Series by now. One could summarise that AMD is definitely back in the game with a winning halo GPU and excellent flagship options - but of course real-world testing will be needed as proof of the pudding. 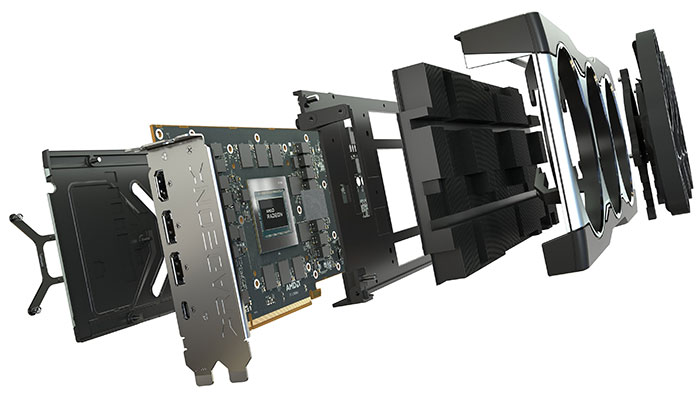 AMD did provide some quite in depth descriptions and detailed specs for the new Radeon RX 6900 XT, RX 6800 XT, and RX 6800 graphics cards - but some commented on the lack of coverage of raytracing performance and what AMD's answer to DLSS was going to be. Thankfully in the wake of the presentation featuring Dr Lisa Su, and another hosted by Frank Azor, some other pertinent info has emerged that will cast some light on AMD's hardware raytracing and DLSS alternative tech.

The Radeon RX 6000 Series takes full advantage of DirectX12 Ultimate, including DirectX Raytracing support. AMD doesn't set aside some CUs for raytracing tasks but instead includes one dedicated Ray Accelerator per CU.

If you head on over to the official AMD RDNA 2 technologies page you will find the first verified performance indicator for this hardware. I've quoted AMD's footnote on the comparative performance below:

"Measured by AMD engineering labs 8/17/2020 on an AMD RDNA 2 based graphics card, using the Procedural Geometry sample application from Microsoft’s DXR SDK, the AMD RDNA 2 based graphics card gets up to 13.8x speedup (471 FPS) using HW based raytracing vs using the Software DXR fallback layer (34 FPS) at the same clocks. Performance may vary. RX-571"

So, it is pretty interesting that the raytracing hardware is nearly 14x faster than software rendering of the same scene, but how does that compare to Nvidia's RTX cards? Industry insider @ghost_motley says that an Asus GeForce RTX 3080 TUF scores 630 FPS in this benchmark, which is about a third faster than the AMD hardware tested. A follow up comment shared a score for a stock GeForce RTX 2080: 308 FPS.

If you watch yesterday's 'Where Gaming Begins: Ep. 2' presentation video from about 16.mins 40s in you can get a glimpse of the first games optimised for AMD RDNA 2 with features such as AMD FidelityFX, Variable Rate Shading (VRS), DirectX 12 Ultimate support, and yes - DirectX Raytracing (DXR). 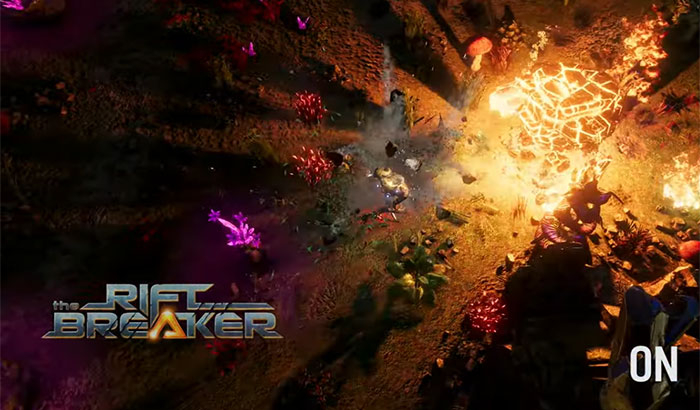 Has AMD got answer to DLSS tech?

For details about AMD's answer to DLSS you will have to put up with some rather thin gravy for now. In case you need an intro to Nvidia's DLSS tech, please check over our previous articles, especially the more recent ones which discuss DLSS 2.0. In essence, Nvidia asserts that "DLSS 2.0 offers image quality comparable to native resolution while rendering only one quarter to one half of the pixels." It works thanks to AI/Deep Learning, and helps make up for the performance impacts seen previously in graphics card architectures which are taxed heavily by raytracing effects.

At release time there will be no such tech available for Radeon RX 6000 GPU buyers but AMD is working hard on implementing something similar. Tom Warren from The Verge said that AMD's DLSS-alike technology will be "open and cross-platform, which could mean it'll come to Xbox Series X and PS5". In his linked article, Warren says that "AMD is working with a number of partners on this technology, and it’s expecting strong industry support". The tech won't be ready for the November/December launches of the first new Radeon RX 6000 graphics cards, so it is another story of wait-and-see.

Posted by Tabbykatze - Thu 29 Oct 2020 11:26
Ray tracing is sitting between 2080 and 3080 but it does need to be pointed out that Nvidia has had 2 years of Turing to optimise how their RT cores work in the drivers.

An interesting start nevertheless if their first offering is doing middle of the road for Ray Tracing.
Posted by CAT-THE-FIFTH - Thu 29 Oct 2020 12:13

Tabbykatze
Ray tracing is sitting between 2080 and 3080 but it does need to be pointed out that Nvidia has had 2 years of Turing to optimise how their RT cores work in the drivers.

An interesting start nevertheless if their first offering is doing middle of the road for Ray Tracing.

Well I would argue AMD has room for further optimisations. If you look at RT on a development front,it appears RDNA2 is more optimised for the later inline raytracing standard than Turing is.
Posted by Zhaoman - Thu 29 Oct 2020 12:17
I'm not too concerned about RT performance because: 1) I'm not interested in current games that implement it; 2) none of this gen's cards, not even the 3090, can provide 4K60 performance so I probably won't be turning it on anyway whichever card I go with; 3) Xbox and PS5 will offer RT on RDNA2 hardware so they will have to get it working pretty well on RDNA2 for the next 3-5 years. So yeah, not too interested in RT performance numbers at this point in time given how variable the landscape still is and how many things could change.
Posted by Tabbykatze - Thu 29 Oct 2020 12:33

CAT-THE-FIFTH
Well I would argue AMD has room for further optimisations. If you look at RT on a development front,it appears RDNA2 is more optimised for the later inline raytracing standard than Turing is.

And as DXR is a more generalised standard and is in consoles, I imagine we could see quite a significant bump as more and more use occurs on it.

Frankly, I want DXR to stamp RTX out, anything needing Gameworks embedded at the detriment of competitors is just not cricket.

Observedly, however, SAM doesn't look like it will detriment the game if you don't have a Ryzen CPU but we'll see!
Posted by kalniel - Thu 29 Oct 2020 13:51
So roughly at 2080ti level? Not bad for a first attempt, and as mentioned, devs will optimise for this approach at any opportunity they can.

Tabbykatze
Observedly, however, SAM doesn't look like it will detriment the game if you don't have a Ryzen CPU but we'll see!

Yeah I think we'll have to wait and see. There might be some neat tricks that devs do on the consoles to access large chunks of VRAM for some reason which SAM would enable on PCs as well, and while I'm sure there'll be a traditional fallback it could get quite slow.