Microsoft has outlined the PC system requirements to play back AV1 format videos with hardware acceleration on Windows 10. In brief, users will need the very latest GPUs from Intel, Nvidia or AMD to playback AV1 files, decoded in hardware. In AMD's case the hardware hasn't even been released yet - the Navi 2X GPUs. Nvidia is hardly in a better position though, as currently only the high-end Ampere GPUs have been launched, and these are hard to find, a situation which is tipped to continue into 2021.

So, why would you care about Hardware Accelerated AV1 Video? First of all, the codec holds promise to deliver up to 50 per cent better compression than H.264 and 20 per cent better than VP9 for the same video content. Those two links take you to Facebook and Netflix developer pages, respectively, for a deeper dive into the codec and platform testing. AV1 has been developed as the successor to VP9 by the Alliance for Open Media and it is an open, royalty-free video coding format. 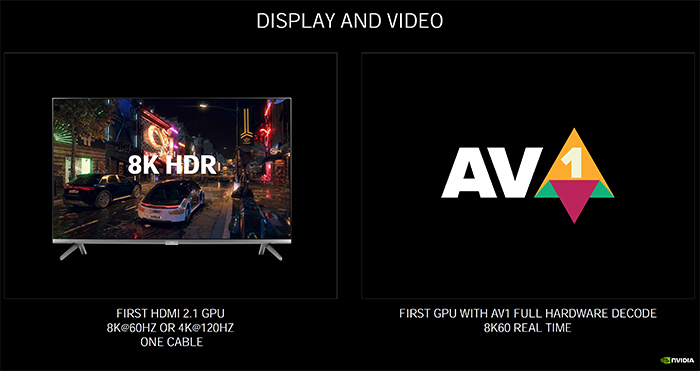 Another big streaming video player, YouTube, already hosts Av1 videos, and you can see which ones by toggling 'Stats for nerds' on playback. I've had a look through my suggested videos on YouTube right now and perhaps a quarter of the new ones used the AV1 codec, though my 1440p 60fps playback was not hardware accelerated it was smooth and fine, with no dropped frames or other problems.

Smaller file sizes for the same content should make for a smoother streaming experience, or alternatively you can stream in higher resolutions/quality. Microsoft says that GPU hardware acceleration for the AV1 format will shift decode from software to the GPU and typically reduces system power consumption, which is of particular benefit to mobile users. On the topic of mobile, AV1 has been supported in Android since v10 of the OS, and it can be hardware accelerated in devices with MediaTek Dimensity 1000 and Rockchip RK3588 SoCs. 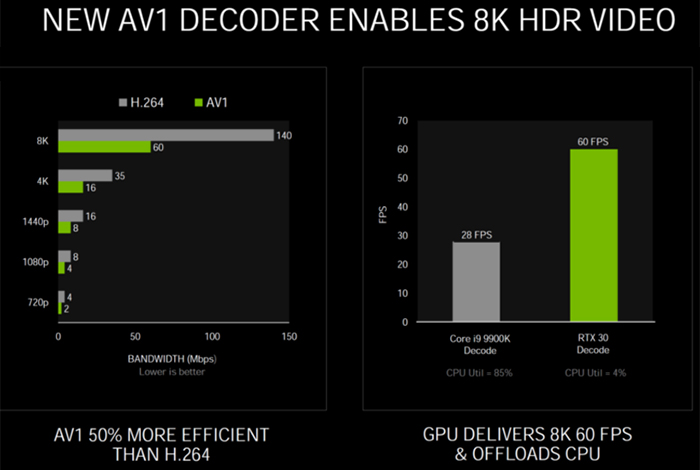 An image format based upon the AV1 compression algorithms called AVIF is set to become popular too.

chj
Whilst the saving in bandwidth is impressive, i'd like to see how easy it is to playback and encode compared to say HVEC or H264 since my plex server is basically a potato.

You wouldn't be using AV1 in such a scenario, it's primary usage is for streaming services.

Home users are not going to be generating AV1 video nor is the ‘scene’ at least not any time soon.

There is a home PC encoder called SVT, but it's only for experts at this time, it's obviously more computationally expensive so will be slower than H.264. Further optimization work may see it integrated into the likes of Handbrake.

For average home users something like Nvdia NVENC hardware encoder getting AV1 support is the likely usage case, maybe another 2 years away perhaps.
Posted by kellyharding - Wed 14 Oct 2020 05:22
Until ffmpeg gets AV1 support, Plex won't support it generally. One day they might add AMD/Radeon acceleration to Plex, but I'm not holding my breath on that one.

Where AV1 is likely to be of more importance is if and when 8K streaming takes off, which given TVs cost 10000s of quid atm, isn't going to be anytime soon, of course it will help with 4K too, which will gradually become more popular, especially with the new consoles (which in theory should be able to support AV1 as the SoC gpu portion is based on rdna2, but depends if Microsoft/Sony implement it).