AMD has been slowly stoking the fires of the Big Navi Hype Train over the course of this year.

Using the RDNA2 architecture as its base, Big Navi graphics feature in next-gen consoles from Sony and Microsoft. It's coming to the PC in its most fulsome form by way of the Radeon RX 6000 series.

We know AMD has an uphill battle to usurp Nvidia's latest RTX 3080 and RTX 3090 as they provide a much stiffer challenge than Ryzen meets against Intel Core on the CPU front. That said, expectations are high that, if you excuse the pun, AMD can get back into the high-end graphics game.

Whetting the appetites of those eager to see how it plays out from a performance perspective, with due knowledge of just how fast Nvidia's finest are, AMD offered up a teaser of RX 6000-series numbers at 4K.

The provisos are longer than this article, insofar as AMD provides internal numbers, doesn't define exactly which Big Navi card it is, and the underlying Ryzen 9 5900X system is not available to buy for a few weeks. 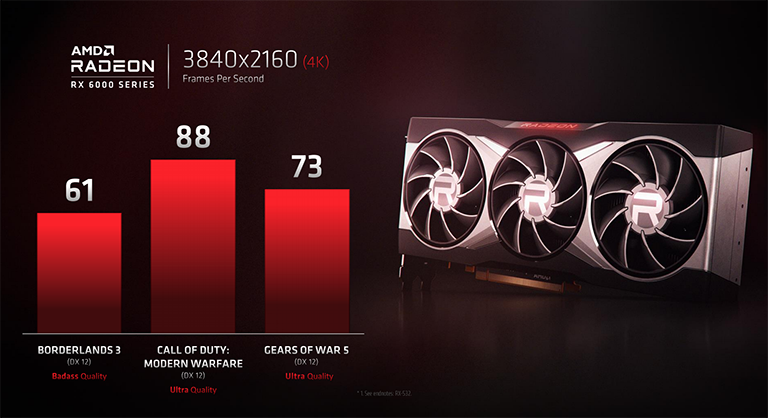 However, the interesting part is that we use two of those games in our own graphics testing: Borderlands 3 and Gears 5. It also appears that AMD is using exactly the same settings we do, so a tenuous comparison against what we have in the databanks isn't totally amiss. Bear in mind that we could be wrong with the settings and the graphs therefore make no sense.

With that out of the way, below we show you where this purported card would fit into the wider high-end GPU landscape. Please take the graph as totally illustrative rather than scientific. Doing it this way provides better context into probable performance. 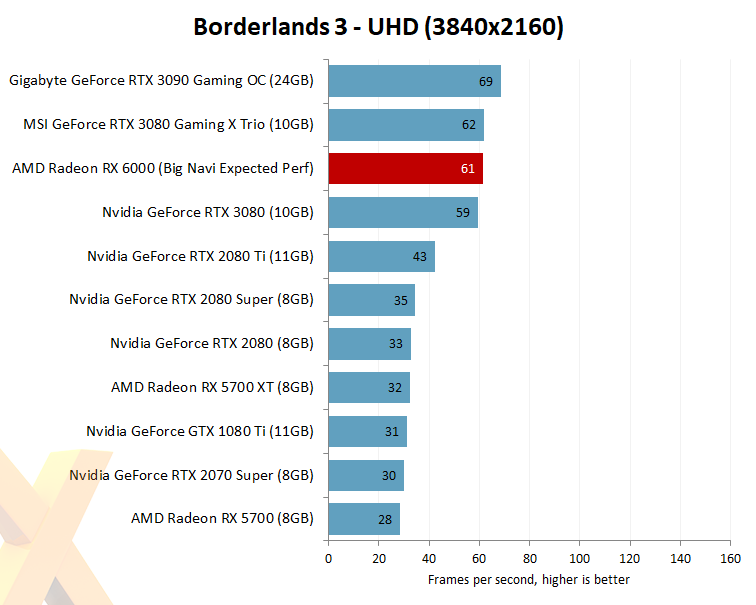 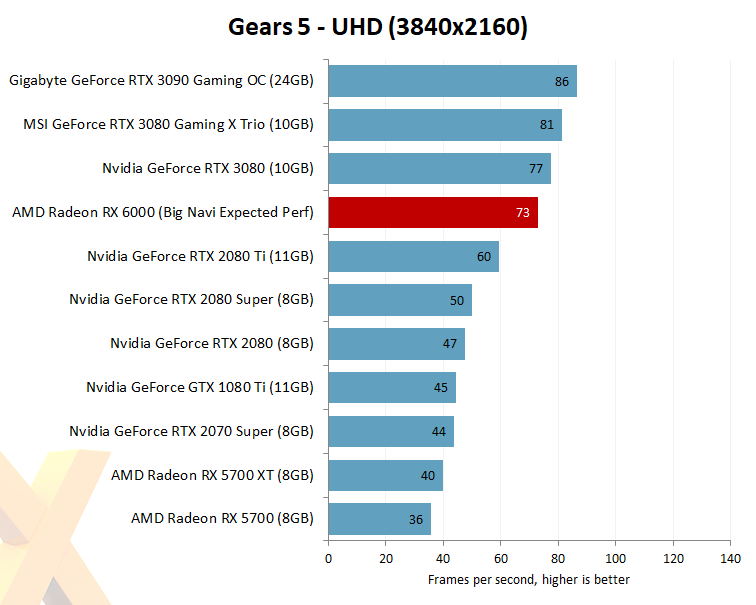 After taking what we show you with the relevant handfuls of salt, what do you think? Does Big Navi meet your expectations? Are you surprised at this announcement? Do tell us in the comments section below.

Eager to learn more, AMD will provide juicier details during its Gaming Event on October 28.

Posted by kalniel - Thu 08 Oct 2020 17:36
I think you're about right. Interesting that AMD provide the settings for almost all their other slides, but omit this one.
Posted by huggi - Thu 08 Oct 2020 17:37
Honestly, that's good enough performance for me since I'm still on 1440p. It all comes down to pricing now, and maybe availability. DXR performance is a secondary concern for me but I'll still be keeping an eye out on that.
Lisa also didn't specify which GPU specifically so AMD could be holding out on us by showing us the second highest card rather than the flagship, but this could all very well be wishful thinking.
Posted by Gentle Viking - Thu 08 Oct 2020 17:38
Yes. especially if those numbers are not from the biggest navi.
Still a substantial lift from the 5700 XT.
Outright performance dont interest me much as i have never wanted to pay for that, people that are interested in that will of course start taunting AMD in 3 - 2 - 1

I am interested in seeing what i can get at the same price point i paid for my 5700XT,,,, even if i am not shopping for a new GFX card as buying a new one every year would be stupid, not least for a person that are not exited about any new or coming games, and only play 1080p with a little ambition to go to 1440p.
Posted by kalniel - Thu 08 Oct 2020 17:41

Gentle Viking;4261447
I am interested in seeing what i can get at the same price point i paid for my 5700XT,,,, even if i am not shopping for a new GFX card as buying a new one every year would be stupid, not least for a person that are not exited about any new or coming games, and only play 1080p with a little ambition to go to 1440p.

Your 5700XT is more than enough for 1440p gaming if you wanted to.
Posted by QuorTek - Thu 08 Oct 2020 17:47
if they keep those numbers and use lesser power, then AMD is a win, especially if they then clock well in comparison to what NVIDIA currently offer.

Also this could be fun, if this card listed here is just their standard one and their Variant of XX80 and XX90 is gonnna hit as a bombshell…

Either way, Dear AMD and NVIDIA… show me what you got and take my money when ya both have a proper thing on the market.