Just ahead of the weekend Jacob Freeman, Global Product Management Director at EVGA, shared the first photos of upcoming GeForce RTX 3090 graphics cards from the company. The image shared was a side-by-side photo of the upcoming EVGA GeForce RTX 3090 FTW3 and XC3 triple fan air-cooled graphics cards. Freeman answered a number of queries about his Tweet, if you care to follow the link. 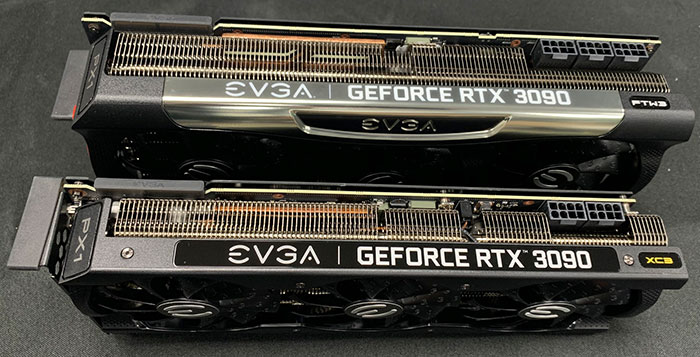 The FTW (For The Win) range is a premium line within the EVGA canon. You can see it uses a triple slot triple fan cooler, with triple 8-pin power connectors. This card is about an inch higher than full-height and has a chrome edged shroud which will also feature RGB lighting. On the topic of size, Freeman confirmed that the GeForce RTX 3090 FTW3 will be the same length as the EVGA GeForce RTX 2080 Ti FTW3 Ultra.

The same PCB used by the air cooled RTX 3090 FTW3 will feature in a number of other high-end RTX 3090 products from EVGA, most notably some liquid cooled versions and the upcoming Kingpin enthusiast OC card. This PCB is expected to feature a strong VRM section to help enthusiasts eke out the best performance.

EVGA's XC models usually underpin its offerings, and you shouldn't expect much more than reference clocks here. The GeForce RTX 3090 XC3 cooler still packs in triple fans but will lack the 'luxury' of the FTW3. You can see it is a bit shorter than its pricier brother, full height, and it is slimmer too, just over 2 slots thick. This XC model should be priced close to the reference model and with very modest OC potential thanks to its twin 8-pin power connectors and lower spec supporting components under the shroud.

Just ahead of the weekend Nvidia slid out a couple of important updates for enthusiasts patiently waiting to find out the GeForce RTX 3070 release date, and it pushed back the RTX 3080 review embargo.

During the GeForce Special Event at the start of the month, the hard launch of the RTX 3070 was simply but nebulously described as being in October. Now Nvidia has officially named an availability date: Thursday, 15th October at 6am PT (2pm in UK).

Oh yeah, you tell them. Don't you think you're getting past us Nvidia uh uh.
Posted by Bagpuss - Mon 14 Sep 2020 14:15
Shame EVGA seem to have all but abandoned the UK market.
Posted by QuorTek - Mon 14 Sep 2020 15:38
bit more interesting with the EVGA offer, maybe should switch from ASUS