Some interesting information about the upcoming Nvidia Ampere graphics cards for gamers / consumers has been shared by tech news site Igor's Lab. The German language site has a pretty good record for leaks/predictions but please take the reported assertions with a pinch of salt, as usual. Igor has 'confirmed' that the leaked Founders Edition pictures we saw shared this weekend are genuine - but perhaps more interesting is his sharing of the purported specs of a trio of RTX 30 graphics cards which will spearhead the series launch.

On the topic of the Nvidia GeForce RTX 3080 Founders Edition image leaks, Igor's Lab says that its sources have confirmed these are genuine images. Apparently Nvidia is holding an internal investigation into the leaks, hoping to find the source(s) at manufacturing partners Foxconn / BYD (Build Your Dreams) to prevent this kind of leak recurring (makes one worry for the fate of the leaker).

The complex FE cooler design works alongside a pennant shaped PCB codenamed PG133. Some partners might wish to use more conventional coolers so a rectangular PCB which is 21.3cm long, dubbed PG132, will be available too. This is probably better for 3rd party water block designers and the like to support. The Nvidia FE design cooler is claimed to add US$150 to the manufacturing price of the launch graphics cards.

The card described as the RTX 3090, above, might materialise under RTX Titan branding, given the presence of the NVLink connector. A lot of this leaked information seems rather speculative. This week we have witnessed a surge in leaks concerning the upcoming Nvidia Ampere-based RTX 30 graphics cards. For example, this story comes in the wake of the aforementioned pictorial leak, some BOM indications information, and a few hours ago some more RTX 3080 FE cooler shots were shared on Reddit, reproduced below. Thanks to news@tip.com for that link. 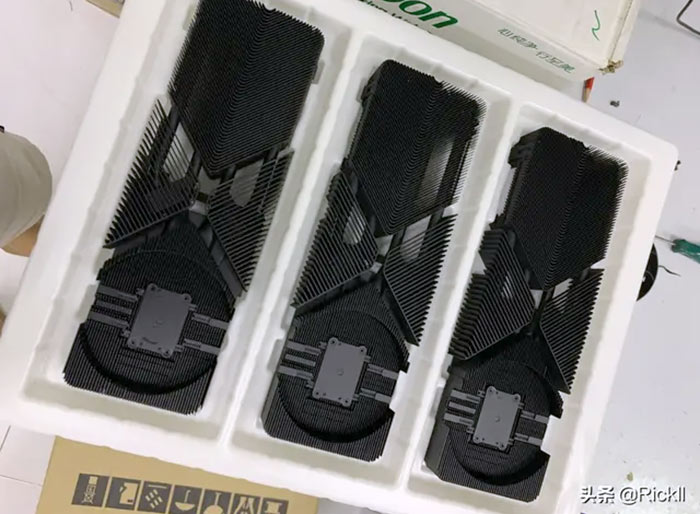 DirtyDean68
I should imagine when those Ampere cards finally launch, the high end cards are going to be silly money. Certainly if the Turing launch was anything to go by.

If the 3090 Ti does exist, likely close to £2,500 as specs similar to the Titan RTX if anything to go by.
Posted by LSG501 - Wed 10 Jun 2020 14:06
Well removing the nvlink from the ‘gaming’ cards is one way to screw over non big business cad users (not to mention rule out sli)…. they could make use of it to increase the memory (nvlink allowed shared memoy) for gpu rendering etc.

Having said that I am curious on the price of the 3090, if it comes with 24GB of ram thats actually really good for ‘me’ in terms of gpu based CAD rendering…although there's no way on this planet I'd pay £1500+ for it

Nvidia… if you want the ‘home professionals’ to use your quadro's take a leaf out of AMD's book and don't price gouge for essentially the same hardware as the geforce cards.