Nvidia has announced that it has secured over 100 design wins in the latest round of laptop updates, very likely inspired by new mobile CPUs from Intel and AMD. Among the throng, towards the premium end of the new releases, will be new GeForce RTX Super GPU packing laptops for power users / gamers. New laptops from every major OEM will be launched in the coming weeks, featuring the latest processors from AMD, Intel and Nvidia starting from $699. Nvidia says that RTX 2060 laptops will start at $999, and RTX 2070 Super models from $1,199.

The biggest news from Nvidia today is about its GeForce RTX Super Max-Q GPUs for laptops. A particular claim the green team is repeating for these GPUs is that they "feature up to 2X the efficiency of first-generation Max-Q laptops". This extra efficiency is particularly welcome in a portable with its thermal constraints and will additionally make laptop performance better when away from its accompanying wall wart. Some laptop designers will use the extra efficiency to make desktop replacement and gaming laptops even thinner and lighter.

Nvidia's Max-Q Dynamic Boost technology "automatically enables real-time GPU and CPU power balancing, allowing the system to dynamically shift up to 15W of power from the CPU to the GPU during GPU-bound workloads, like gaming". It says that this balancing algorithm results in an overall 10 per cent performance boost. It is also worth mentioning that Nvidia's new Advanced Optimus Technology enables G-Sync support for the first time. Last but not least we must remember Nvidia's recently revamped DLSS technology, DLSS 2.0, which is claimed to make big strides in faster, more efficient performance. 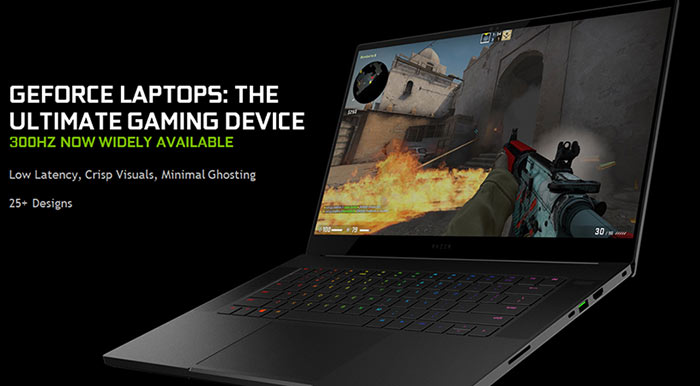 Pondering over the huge number of new laptops featuring the latest AMD, Intel and Nvidia technologies; 25+ designs will offer 300Hz displays, and there are ten new RTX Studio laptops from the likes of Acer, Gigabyte, MSI, and Razer. Starting from the 15th April you will be able to get your hands on the first laptops featuring the GeForce RTX 2080 Max-Q and RTX 2070 Max-Q parts. More will be arriving in retail during May, says Nvidia.