About a month ago some information leaked, via Nvidia's graphics driver releases, indicating that the upcoming GeForce MX330 and MX350 GPUs would stick with the ageing Pascal architecture. Now Nvidia has made these parts official and the thoughts and conclusions we reached last month seem to have been proved correct.

Nvidia has published product pages for the new GeForce MX330 and MX350 laptop GPUs. However, if you go and visit these official links the specs pages are rather barren. All we really get is a GeForce Performance score - comparing the new GPUs against the Iris Plus Graphics on Intel i7-1065G7 (Ice Lake). These scores are 2x and 2.5x respectively. Furthermore, Nvidia says the GPUs use GDDR5 memory and lists support for a number of APIs, OSes and interfaces.

So, yes the Nvidia GeForce MX330 is just another rebrand / tweak of the MX150. Its 25W incarnation has a 0.8 per cent faster clock than the MX250 (which was very similar to the MX150). At least it has brought this level of performance to the MXX30 tier.

As speculated previously the new GeForce MX350 appears to represent a good spec jump for the MX series by using the same GP107 Pascal chip as the GTX 1050. However, Nvidia hobbles this lower end GPU by restricting it to a 64-bit memory interface and TGP of 25W. NotebookCheck says that these alterations make the MX350 closer in performance to the old GTYX 960M than any GTX 1050 you might have experienced.

NotebookCheck has some preliminary benchmarks to share, which will help illustrate the potential (or lack thereof) of the new MX300 series of GPUs. I've shared a screen grab of the 1920x1080 Fire Strike Graphics benchmarks below, with the MX350 set as the baseline (end column). 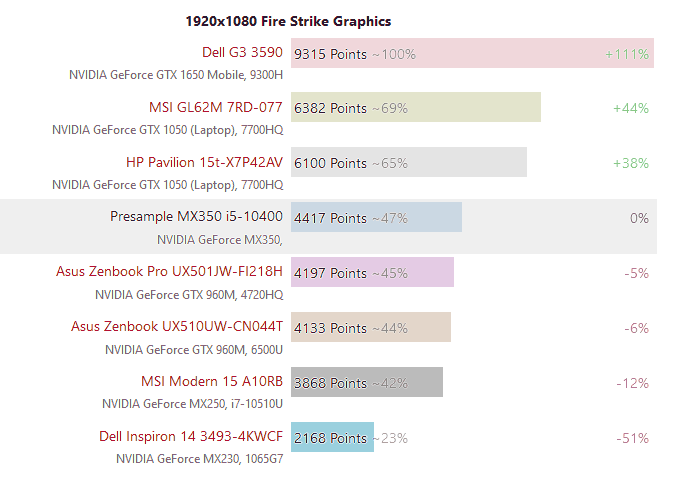 You can see the laptop GeForce GTX 1050 is about 38 per cent faster than the MX350. In another test the MX330 was about 11 per cent slower than the MX350. It is expected that this will be the last Pascal-based refresh of Nvidia's GeForce MX series for ultra-mobile laptops.

Posted by Gentle Viking - Thu 13 Feb 2020 11:47
Well Nvidia and MX still ring low performance in my ears.
But of course that's fine if you know and don't have the need or too high expectations, i would be fine i don't need a gaming laptop i have my desktop for that.