I've searched through the database for more appropriate comparisons and it seems that the yet to be launched Ryzen 7 Pro 4750G desktop APU performance is very much the same as the Ryzen 7 PRO 3700 (Matisse) in single/multi core compute tests. The perhaps more familiar AMD Ryzen 7 3700X, is very similar in single core tests but about 10 per cent faster in multi-core. 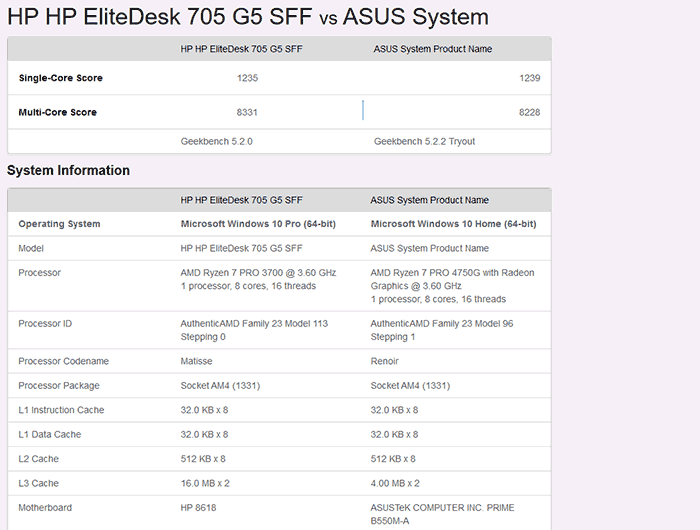 As well as bringing Zen 2 cores to Ryzen desktop APUs the new Renoir chips will double the maximum cores/threads available. Yes, the AMD Ryzen 7 Pro 4750G desktop APU seems very similar to the Ryzen 7 PRO 3700 or Ryzen 7 3700X with 8C/16T plus a base/boost of 3.6/4.4GHz, and TDP of 65W. However, the Matisse parts have significantly larger L3 caches (32MB vs 8MB) and their power budget isn't eaten into by any onboard graphics.

Compact systems makers and those who simply don't need discrete graphics might find the new Ryzen 7 Pro 4750G desktop APU and its brethren appeal. Onboard is a 7nm Vega iGPU, with 8CUs in this case, running at 2.1GHz.

Pricing of the new Renoir desktops APUs will be key considering the performance on offer. Currently the AMD Ryzen 7 3700X, for example, is available in the UK for a smidgeon under £300. How will AMD price position the Ryzen 7 Pro 4750G desktop APU and similar (like non-Pro versions) in order not to cannibalise its CPU sales? Perhaps this factor is one of the main ones influencing the staggered CPU-APU cadence.

For a bit more reading on the upcoming Renoir desktop APUs, back in mid-May HEXUS reported on the lineup being leaked, including a processor very similar to this (8C/16T, 4.4GHz boost, 8CUs, and 65W TDP).

Luke7
I sort of wish they'd balanced the gpu/cpu side a little more towards the gpu… I'm currently running an ancient A10 so it it would be a heck of an upgrade for me, and I realise the 8CUs in this are stronger than the 11 in the 3400G… But I do think they could have made room for the 11 (or more) upgraded CUs and lopped off a core.

That would indeed be nice. I'm hardly ever CPU bound but if I ever game I will become GPU bound quite quickly.

I remember I bought the last gen HP Envy 13" x360 with the Ryzen 5 3500U and it would throttle and leave the CPU clocks rather high whilst lowering the GPU clocks when trying to run a basic game (FFXIV) - it was running above 30fps before throttling but only around 10fps when throttled. Although not quite the same, it would have been nice if they could make the GPU stronger relative to the CPU. Needless to say, neither matter when it throttles in less than 5 minutes so I returned it very quickly. It's a shame as it was such a nice machine.

This year's HP Envy with the new Renoir Ryzen series seem very adequate though but again, still more CPU power than I'll ever need but lacking a bit in GPU power for it to be genuinely useful.
Posted by Bagpuss - Sat 18 Jul 2020 06:34
I'd imagine this APU design is closer to the 8c16t CPU's used in the new consoles than the desktop 3700/3800's, especially with the cut down cache…and gives a pretty good idea of the consoles real CPU performance, relative to a desktop parts.
Posted by DanceswithUnix - Sat 18 Jul 2020 07:38

Whereas I'm fine with a CPU heavy setup, I'm tempted to get one for my next work machine. I need enough graphics to drive two (preferably three) Displayport/hdmi monitors with some text editors. I just need to see some GCC code compile benchmarks on these things, though frankly from seeing what a 2200G can do I imagine these will be very nice.
Posted by Luke7 - Sat 18 Jul 2020 23:25

Whereas I'm fine with a CPU heavy setup, I'm tempted to get one for my next work machine. I need enough graphics to drive two (preferably three) Displayport/hdmi monitors with some text editors. I just need to see some GCC code compile benchmarks on these things, though frankly from seeing what a 2200G can do I imagine these will be very nice.

That's a fair enough point, I guess it works both ways really like the other reply to me said. Some of us need more gpu and less cpu, whilst some of us need max cpu and can do without gpu… I guess its a really hard thing to balance in terms of what will sell plus what they can physically do with how their CCXs work. Be nice if they could do both though lol :D