French PC and tech retailer Materiel.net appears to have accidentally listed the yet-to-be-officially-announced AMD Ryzen 3000XT CPUs. Last week we saw further evidence that AMD was brewing up this 'Matisse Refresh' processor line via the 3DMark benchmarks online database. The chips had previously been outlined in a ChipHell forum post by overclocker TopPC. 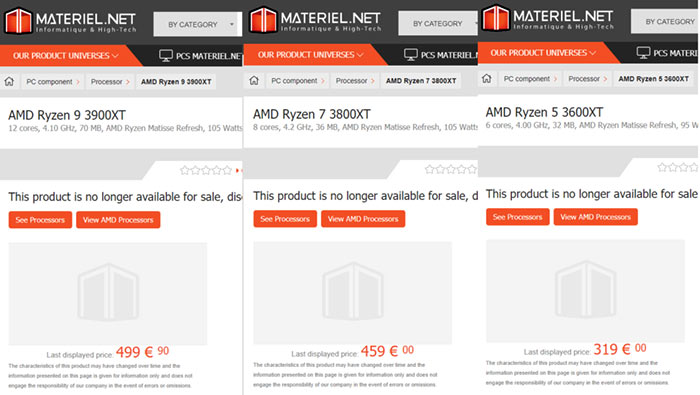 You can see a composite of the web page screenshots from the three new processors above. VideoCardz put together this collage. You can still visit the respective Materiel.net product pages at the following links, at the time of writing:

These are simply clock bumped versions of the existing corresponding Ryzen 3000X models, with the same core and cache configs, as far as we know. However, it is still unclear what the final shipping base/boost clocks will be as the ChipHell and 3DMark leaks of last week didn't exactly line up. The premature listing by Materiel.net tallies with the ChipHell data which proposed that the XT parts would have 200 to 300MHz faster base clocks.

Materiel.net pricing is shown next to the product page links above. VideoCardz notes that "Materiel's pricing is generally very high compared to other French and European sellers," so this isn't a definitive Euro price. The site chirped in helpfully with some further info, reporting that two sources have indicated that the Ryzen 5 3600XT will cost US$28 USD more than the existing Ryzen 5 3600X CPU.

Hopefully, these AMD Ryzen 3000XT CPUs will go official soon, so we can get them in the labs, and check the extra performance on offer. Additionally, it will be interesting to see how AMD prices these new Ryzen 3000XT chips and if there are adjustments to accommodate them.

Xlucine
They'd have to have greatly improved clocks for these to be worth any premium,