AMD has launched its Ryzen Pro 4000 series mobile processors for enterprise and business laptops. At the time of launch it has already lined up a number of designs in partnership with PC systems making heavyweights like HP and Lenovo (we saw a Lenovo AMD Ryzen Pro 4000 device lineup leak back in Feb). In brief, the launch means that business laptop users will shortly be able to take advantage of the architectural upgrades delivered in the Ryzen 4000 Series mobile processors (Zen 2 CPU cores, Vega graphics) with a healthy sprinkling of 'Pro' security and manageability features. 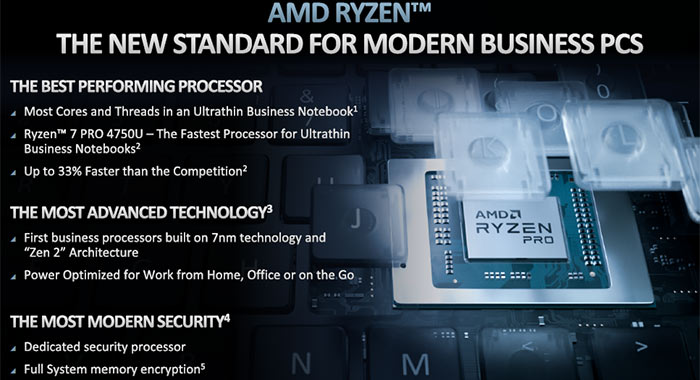 The launch of the new processors extends AMD's competitive reach into the modern business laptop market, said Saeid Moshkelani, SVP and GM of the client business unit at AMD. "Built on the ground-breaking 'Zen 2' architecture and 7nm process technology, the AMD Ryzen for business portfolio delivers advanced performance, reliable security features, impressive battery life and advanced manageability to significantly elevate the capabilities of the ultrathin notebook in any work environment," Moshkelani explained, to clarify the benefits of the new technology on offer. 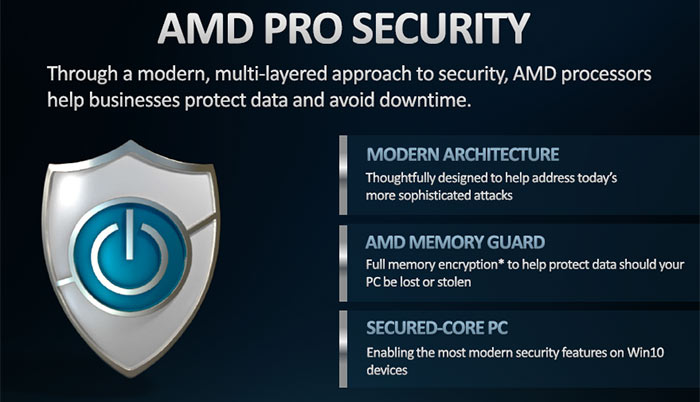 You can see that the premium choice is the AMD Ryzen 7 Pro 4750U, with an impressive 8C/16T running at up to 4.1GHz and with a TDP of just 15W. This APU also features seven Vega GPU cores and 12MB of cache. In terms of performance, the flagship Ryzen Pro 4000 mobile processor delivers "up to 33 per cent better multi-threaded performance compared to the competition," claims AMD. Looking through the small print, AMD has compared a Ryzen 7 Pro 4750U Reference Platform vs. i7-10710U (Dell XPS 13) to come up with that metric. 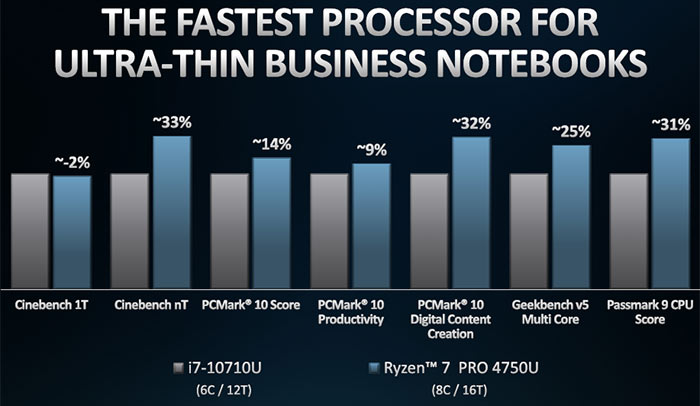 Another headline claim for the AMD Ryzen 7 Pro 4750U is that it is responsive and power efficient, providing up to 37 per cent better Microsoft Office performance than the previous gen. For this test AMD used its reference platform again, vs a Ryzen 7 Pro 3700U (HP EliteBook 745 G6) in PCMark 10.

Further comparisons for the flagship mobile processor are that it delivers up to 2X performance per watt over the previous generation, and that it can deliver up to 20+ hours of battery life for mobile warriors. Battery life can vary widely depending upon ODM design choices.

If you want to check out the non-Pro, or consumer, alternatives to the above, you can see that AMD saw fit to release nine SKUs to this market. Some Ryzen 4000 series processors are quite close in spec to the new Pro versions but lack the advanced security and manageability features, of course. 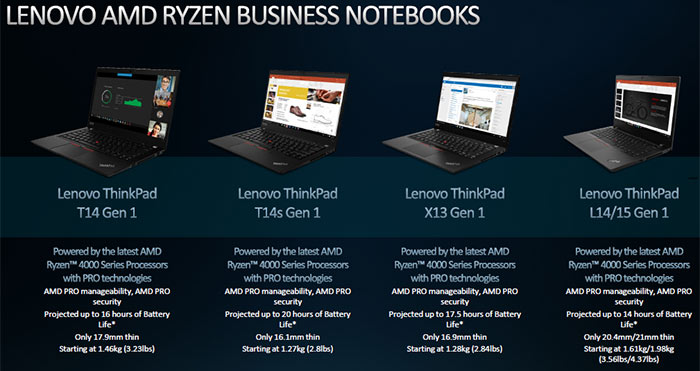 We saw some indicative Lenovo Ryzen Pro 4000 series designs in the previous leak. Today Lenovo confirmed it would be "updating the latest ThinkPad portfolio focused on providing a broad customer choice and a smarter workforce experience, powered by AMD Ryzen PRO 4000 Series Mobile Processors". You can see a selection of the updated portfolio in the slide above.

HP will be updating the HP ProBook 445 G7 and HP ProBook 455 G7 laptops with AMD's latest Pro processors, as well as its ProBook x360 435 G7, a business convertible laptop unveiled earlier this year. 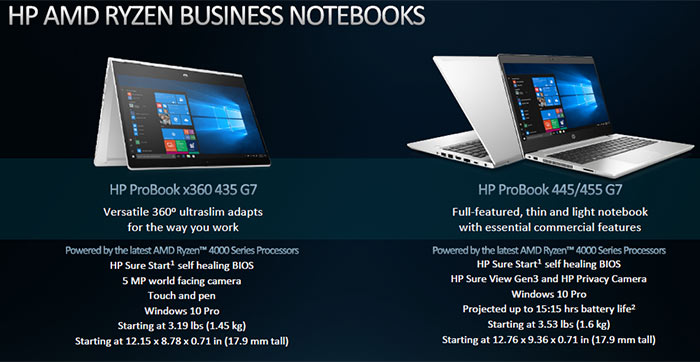 AMD says that the above systems partners will release their Ryzen Pro 4000 series mobile processor powered updated machines before H1 2020 is over. For specifics keep an eye open for press releases from HP and Lenovo in the HEXUS press section.

Tabbykatze
That 4750U is looking tasty, someone was just making an apples to oranges comparison the other day that AMD does not have any 15w 8 Cores, well here they are!

gagaga
If Intel do, they'll use at least double 15w and most likely triple. At least these stand a chance of being something close to 15w.

Can remember seeing a review somewhere and the guy said he'd asked the firm for clarification of the tdp and they said 35w but realistically 65w lol
Posted by Friesiansam - Thu 07 May 2020 16:43

So it will keep your hands warm on a cold day.