AMD has officially announced that it will be holding a press conference at CES 2020. The big Las Vegas tech show officially starts on Tuesday 7th January. However, AMD and some other big players traditionally unveil important products, make big announcements, and tease the latest and greatest in tech a day ahead of the show opening its doors to the public. Thus the AMD press conference at CES 2020 is scheduled for Monday, 6th Jan at 2:00 p.m. PST at the Mandalay Bay resort.

In addition to the typically dry official press announcement, AMD has been teasing via its FB and Twitter accounts that the CES 2020 conference will be something special. It says that "At CES 2020, AMD will push the envelope yet again to make 2020 an incredible year for high-performance computing." 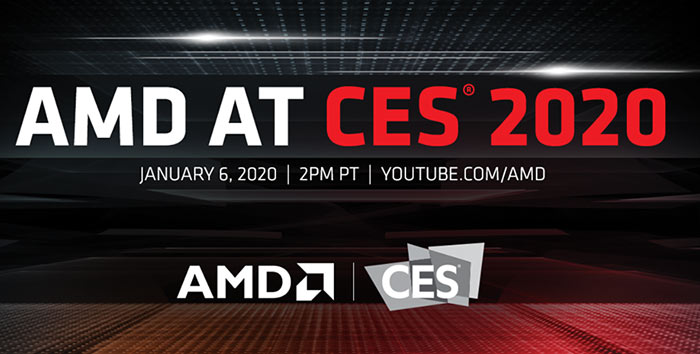 As the CES 2020 is centrally a consumer show the presentation, hosted by AMD President and CEO Dr. Lisa Su, should be consumer focussed rather than centre on corporate, enterprise and data centre type products. With Zen 2 still pretty young in lifecycle terms there isn't expected to be any deep dive into Zen 3 (but read the additional report below). On the CPU side of things the Ryzen 4000 mobile (Renoir) APU series is quite likely to make an appearance - which despite the '4000' are Zen 2 CPU based parts. We have already seen various laptops prematurely listed featuring this processor line.

It is pretty certain we will see the Radeon RX 5600 XT launched, alongside various computers that come equipped with it. Additionally, we might have some early teasing of the SoCs behind the next gen consoles due out in 2020.

Yesterday, Twitter tech commenter @RetiredEngineer shared a clipping from a major Taiwanese newspaper which suggests that Lisa Su will provide some Zen 3 details during the CES 2020 presentation. Most commenters thought that Su would only provide the slightest of teasers for Zen 3 at this stage. Elsewhere, the newspaper report provided a handy cut-out-and-keep chart of what is expected to be announced by AMD as we travel through 2020. 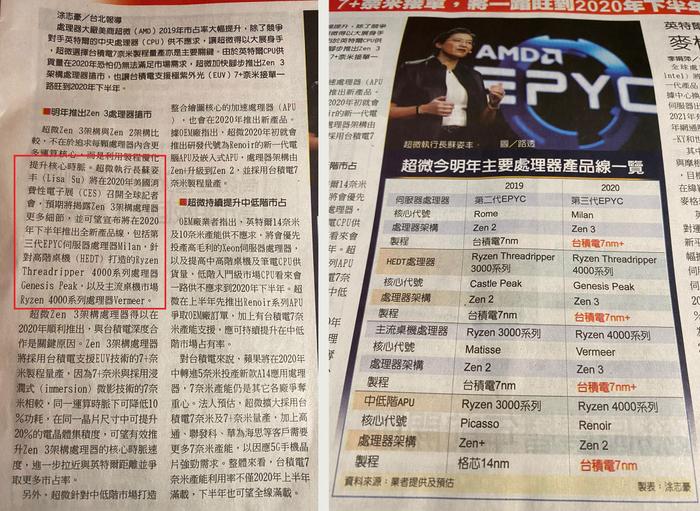 philehidiot
They've made a mistake with the laptop naming convention. They need to align it with the same hardware as the desktop stuff as it's misleading. I think it's a genuine mistake as they wanted everything on the same convention but they could easily be said to be intentionally misleading.

I did wonder that, but even if they made an IGP chiplet to use the same CPU chiplet as the desktop parts it would have lower TDP and the IGP would get in the way of memory accesses so it wouldn't behave the same.

Don't Intel just do their delay the other way around, pushing laptop parts first and Xeon's later with the graphics stripped out?