AMD's highly anticipated Ryzen 9 3950X, a 16C/32T processor, was due to arrive this month. However, the company has announced that the 3950X will be delayed as it focuses on meeting demand for its existing 3rd gen Ryzen lineup. Softening the impact of this disappointment somewhat AMD said that it would launch the 3rd gen Ryzen Threadripper processors in November, alongside the 3950X. 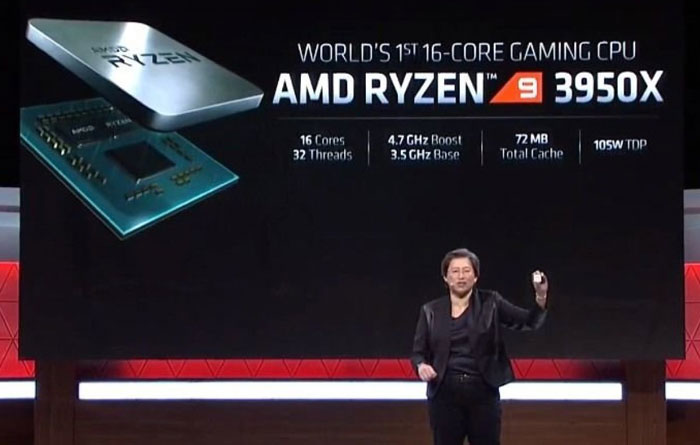 Since July HEXUS has reviewed four SKUs from the new AMD Ryzen 3000 family of processors; the AMD Ryzen 9 3900X and Ryzen 7 3700X, the Ryzen 5 3600X, and the Ryzen 7 3800X. If you are interested in shopping at the high end of the range, trying to grab the 12C/24T Ryzen 9 3900X, you might notice it isn't so easy to find stocks at retailers. We don't know whether that is because of AMD's manufacturing partner being unable to yield enough 7nm chips of high enough quality – or that the company is setting aside its best dies for Epyc Rome parts – or a bit of both of these things... However, the shortages help us to understand that AMD's launching of a similarly scarce chip could backfire, and it seems to be waiting until it has built up some inventory to meet expected demand.

Chitter-chatter about TSMC's new longer lead times resulting in AMD Ryzen and Ryzen Threadripper delays is not likely to be true. AMD's Zen 2 core processor orders would have been queued up months ago.

Tech site AnandTech got a statement from AMD late Friday about the above:

"We are focusing on meeting the strong demand for our 3rd generation AMD Ryzen processors in the market and now plan to launch both the AMD Ryzen 9 3950X and initial members of the 3rd Gen AMD Ryzen Threadripper processor family in volume this November. We are confident that when enthusiasts get their hands on the world’s first 16-core mainstream desktop processor and our next-generation of high-end desktop processors, the wait will be well worth it." 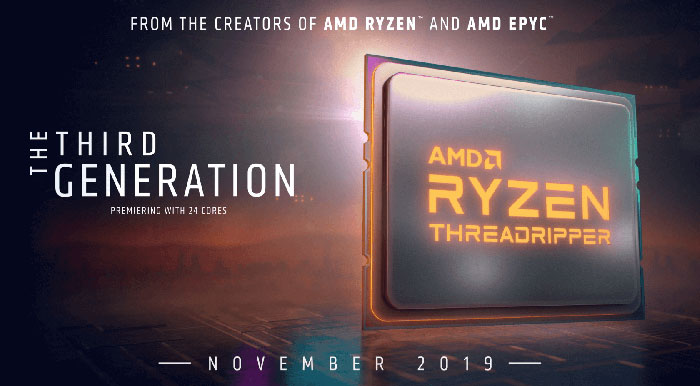 Moving onto the good news nugget from the AMD statement – the third generation AMD Ryzen Threadripper processors are coming in November. The range will start with parts boasting 24 cores, but we know little more about the expected lineup at this time.

Starting at 24 cores means it's likely a £1000 chip though….
Posted by Output - Mon 23 Sep 2019 13:12
I had been wondering why there still seemed to be no sign of even pre-order listings despite it obviously being September.

Remember there'll be two new board ranges, the TRX 40/80 so you can pick and choose between 4 and 8 channels of RAM. I think that's a fantastic way of making entry level HEDT platforms because if you buy a 32 core with TRX40 and move onto projects that need shed tons of memory, then boom new mobo and you have RAM for days.

I would very much like to know the difference between the TRX80 and the WRX80. Most of the X399 boards were impressive but as of the Ryzen 3rd gen mobo vendors really started taking AMD seriously and made really gucci boards. I hope the new Threadripper ranges get the same treatment!