Been a busy few weeks, hasn't it? AMD released a tech jamboree at the start of the month, headlined by all-new Navi-based Radeons and six Ryzen 3000-series CPUs touting the latest Zen 2 architecture and 7nm production.

Though impressive, their asking price puts them outside of the volume mainstream market. This is where the Ryzen 5 duo comes in. We've got our mitts on the Ryzen 5 3600X, retailing for $250 (£240), so let's take a closer look.

AMD follows the core-and-thread strategy laid down by previous generations, which translates to Ryzen 5 housing six cores and 12 threads. The latest iteration keeps the 95W TDP associated with the X-nomenclature parts and increases frequencies over the models it replaces.

There's an extra 200MHz on base and boost speeds when compared to Ryzen 5 2600X, memory is supported at the faster DDR4-3200 standard, there's double the L3 cache, and the cumulative benefits of Zen 2 over Zen+ and original Zen offer an extra 10-15 per cent more IPC.

Ryzen 5 3600X is ideally paired with an X570 motherboard, though there's every reason why many, if not most, 300-series and 400-series boards will support it, too. Be sure to check for applicable BIOS updates if you are already committed on the Ryzen ecosystem and fancy upgrading to the new chips for extra oomph. 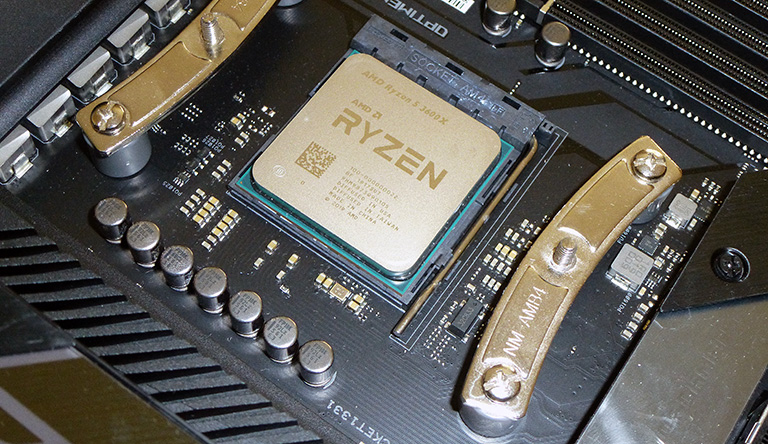 One problem that Ryzen 5 3600X faces is rather close to home. The non-X part ships with a meagre 65W TDP, making it arguably a better choice in small-form-factor systems and for those that want to build a near-silent PC. Its quoted frequencies are also pretty close to the X model, though it may not run quite as high when stressing all cores because retail models ship with the simpler Wraith Stealth cooler rather than the chunkier Wraith Spire in the Ryzen 5 3600X's box.

The kicker is that the Ryzen 5 3600 is £50 cheaper, which is a big deal when building a base unit for, say, a grand. That extra cash can go towards increasing storage capacity or even opting for the next GPU up in the stack. Decisions, decisions. AMD's recent promotion applies to this model, where you receive a three-month subscription to Xbox Game Pass. Further details on qualifying products are available at amd.com.

Our sample, cooled by a capable Noctua NH-D15S running with a single fan, averaged 4.11GHz across all cores under prolonged load - a figure that's right in the middle of the base and boost speeds. Peak temperature was reported as 67C.

A few questions need to be answered in the benchmark section. Is it worth investing in the Ryzen 5 3600X if you already have a Ryzen 5 from an older generation? How does it compare to, say, the 8C16T Ryzen 7 1800X from the original Zen family? Cores and threads vs. architecture and frequency. Last but not least, how does it shake up against the blue team? Let's find out.