Overclocker, OC tool designer, and YouTuber der8auer has released the results of his AMD Ryzen 3000 boost survey. There were almost 3000 participants in der8auer's survey which he filtered, removing obvious trolls and so on from the results, to get to 2726 valid submissions. While participants are out of the surveyor's control, and they could have had a wide range of very different computer hardware, BIOS and software versions/settings applied, the results are nevertheless rather interesting. The big picture drawn from the results, is that, with regard to Ryzen 3000 processors achieving their advertised boost speeds when pushed, "it's worse than I thought," said der8auer.

After the necessary pre-amble about the survey data he collected, and charting how many of each SKU was represented in the survey (see below), der8auer discussed the testing methodology. As recommended by AMD, he asked survey participants to run Cinebench R15 single core, monitor with HWinfo (500ms polling), and make sure PBO was turned off. Der8auer also touched on survey theory, where participants are more likely to come from the satisfaction extremes of the user spectrum - those with strong opinions are more likely to use their time testing for a survey. 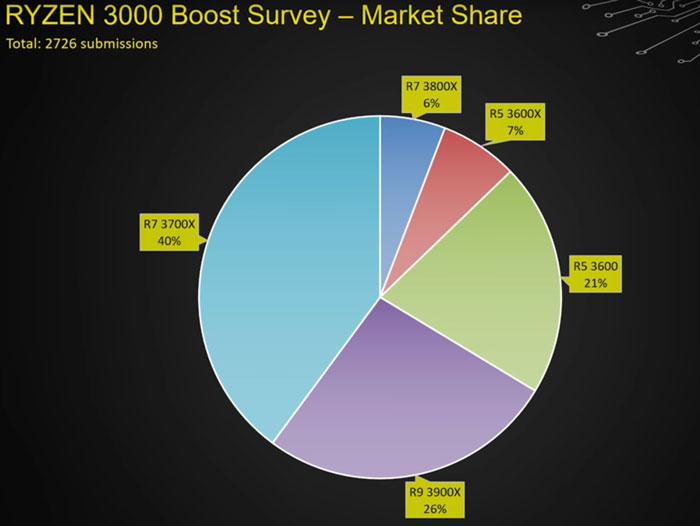 At the higher end the distribution of clock speeds, as shown in der8auer's graphs, got worse. For the 12-core Ryzen 9 3900X, for example, only 5.6 per cent of entries were seen to have managed to reach the boost speeds advertised by AMD. See the graph below for this test sample. 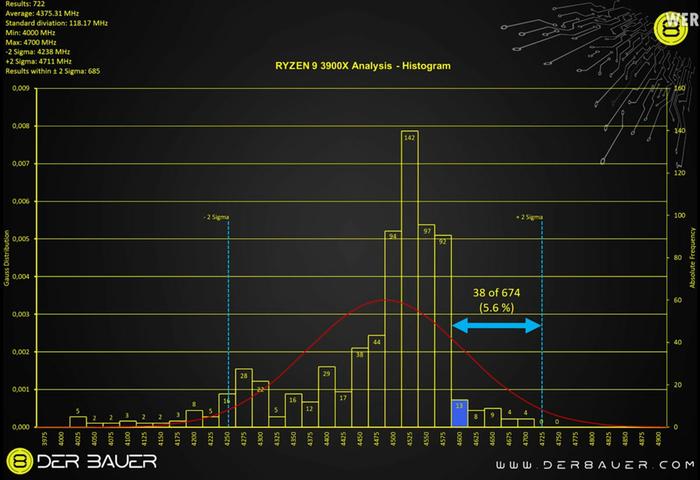 Though results of the boost clock testing were "worse" than the OC expert expected, der8auer still considers the AMD Ryzen 3000 series to be good performers, and a good value choice. Thus der8auer asks the question of why, especially with the Ryzen 3900X at 4,600MHz, has AMD decided to market its chips at difficult to achieve / maintain clock speeds? Hopefully these and similar results don't precipitate any legal or other problems for AMD in various countries.

In am email to HEXUS and a Twitter update, AMD has made a statement with regard to boost clocks. In brief, it is working on BIOS updates with motherboard partners to address a firmware issue that it has identified. We will hear more about the new BIOS and further optimisations coming alongside the ironing out of the issues on Tuesday, 10th September.

Bagpuss
Is that a ‘class action’ law suit I see approaching on the horizon?

Sadly you might be right. I always see way more than base clock even when hammering all threads for some minutes on the retail cooler, so I actually think AMD have been quite generous with their ratings for where it really matters. That won't stop the vultures from circling at the first opportunity though.
Posted by Jonj1611 - Tue 03 Sep 2019 12:09
Personally I would like to see a controlled test rather than random users with different hardware taking random times to do the test.

I'm surprised Hexus published this as a “news” article. Should have just said bloke gets random users with random hardware to do a test. Results inconclusive.
Posted by yeeeeman - Tue 03 Sep 2019 12:16
I am quite shocked that people are not able to open an image, think and then read what the click-baity article says. As you can see, the majority of samples for 3900X boost to 4525Mhz, which is 75Mhz lower than advertised boost speed. If that isn't close enough I don't know what it is…
Also, to prove that the title is click bait, it should have been: “Ryzen 3000 boost is very close to the one advertised in most cases”. No, they transformed this 75Mhz gap which is 1-2% into a huge deal breaker and they seem to be insisting with this since there are not many bad things to say about the new AMD cpus…
Posted by yeeeeman - Tue 03 Sep 2019 12:19
Matter of fact is that these new CPUs are great performers, great prices, great consumption and I sense a bit of hatred from Intel supporters since they don't have many things to say. Also lets not forget about that Israeli firm that made a site and some videos specially for AMD to denigrate them. It is up to consumers to use their brains and not be fooled.