Best known for its power supplies, FSP also makes a range of coolers and PC cases. At CES 2020 the Taiwanese company presented a number of new additions to its product stack including several PSUs but probably the most eye-catching product it had on show in Las Vegas was the new T-Wings 2-in-1 High-End PC chassis. 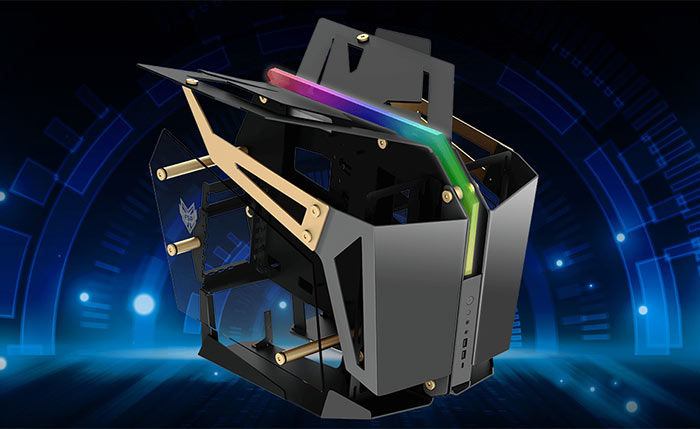 The new FSP T-Wings CMT710 2-in-1 high-end PC chassis, shown off at the CES, has now been officially launched. The rather adventurous and extravagant but symmetrical design is said to have been "inspired by bat wings," and be tailored for "hardcore gamers". That explains the aggressive angular RGB LED-lit appearance with plenty of cooling and airflow considerations in place. However, FSP seems to have missed a trick as the 'wings' are fixed rather than animated like InWin's butterfly inspired Diey chassis.

FSP's key boast with the T-Wings CMT710 is that it can easily house two PC systems - hence the 2-in-1 in my headline. The semi open design is made from sturdy anodised aluminium sheets plus 4mm tempered glass. Dual chambers are big enough to contain dual 360mm radiators. FSP suggests the dual systems might be purposed as follows; "one system for gaming while the other system manages all of the streaming content, which will help eliminate any lags or system slowdowns".

Good airflow and a clean build aesthetic are enabled by the central 40mm void where you can hide away your cables. In addition to the twin 360mm radiator capacity the T-Wings can fit up to three additional 120mm intake fans per side. Other user friendly features worth pointing out are the FSP T-Wings CMT710's addressable RGB centre bar which is compatible with most motherboard maker sync systems, the option for vertical or horizontal GPU installation, and the easy access central front I/O which includes a USB-C port.

Buyers of the FSP T-Wings CMT710 2-in-1 high-end PC chassis can choose Black & Gold or Black & Red finishes. The MSPR of this chassis is US$499. FSP has created a worldwide competition (runs until 8th April) for those interested.

Why do so many makers of big, heavy cases never think to put handles on 'em?
Posted by souper - Tue 03 Mar 2020 13:09
Awesome case, good idea re the handle (Ttaskmaster)
Posted by Roobubba - Tue 03 Mar 2020 13:58
It's not so much designed for hardcore gamers as for people with lots of money who like to think of themselves as hardcore.

Ttaskmaster
I presume the bar over the top also functions as a carry handle….. no…?

Why do so many makers of big, heavy cases never think to put handles on 'em?

If a case is that big & heavy, I'd rather see it have a built-in sack truck!
Posted by ik9000 - Tue 03 Mar 2020 16:44
@Tasky IRRC Bitfenix stuck a handle on the survivor and prodigy cases. Silverstone had a handle on the raven and fortress 2 cases. There have been cases with handles. Problem is it adds to the depth, or else eats into the internal spaces. I prefer not having one for both reasons as the number of times I move it around is limited. More interested in airflow and ease of fitting under my desk.