You are here:
Cooling Chassis News

NZXT has updated some of its key modern PC cooling products to facilitate "your sleek all-white build". Specifically, it has launched the Kraken X and Z RGB AiO family coolers, and the Aer RGB 2 fans (120 and 140mm versions) in a smart looking matte white.

Great play is made of the latest introductions, as NZXT reckons it is helping PC builders express themselves by making "a splash in a new colour". However, some would argue that white, and black, aren't colours; others might suggest that they are shades. Whatever the case, white, alone, is not 'very colourful'. All that can change though, when you fire up the RGB LEDs featured in these new cooling products announced by NZXT.

HEXUS reviewed the NZXT Kraken Z73, one of the products just announced as receiving the whitening treatment, back in Feb 2020. If you want to have a scan back at that review, you can get a good summary of what this 360mm AiO offers and how it stands competitively.

Even with just the solitary choice of black construction, we thought this AiO looked awesome, was easy to fit, and offered high-end cooling performance. As well as the aRGB lighting, these devices have a flexible true colour 320x320 pixel LCD on the cooling block. The worst thing about this product was the price tag, and the shiny new (matte) white one doesn't fix that, in fact it is about seven per cent more expensive (MSRP US$310 rather than $280). There are also white versions of the Kraken Z63 RGB (280mm), and Kraken Z53 RGB (240mm).

Pondering over the Kraken X RGB family, the additions follow the same process as above, all white construction and fans. Again it is available in three sizes (360, 280 and 240mm), but this time with a more modest 'infinity mirror' logo on the pump cap. HEXUS reviewed the middle-diddle member of this family, the NZXT Kraken X63 RGB (280mm) back in December 2020, if you want to read more details and a third party view. 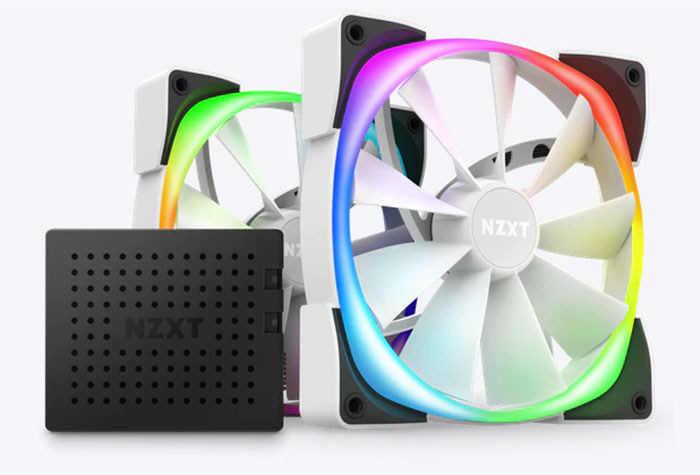 For even greater white build possibilities, you can now get NZXT's Aer fans in white. The firm is making these in 120 and 140mm varieties, and you can buy single, twin, and triple packs. Other than the colours there is no difference between these and the existing black/colour trim versions – mixing high performance, low drag cooling performance with quiet operation, and snazzy aRGB.

NZXT has also released a new version of its H510 chassis with greater airflow, aptly named the H510 Flow (US$110). The horizontal split white/black version looks like a good case to team up with these new all-white AiO coolers and fans.

All the above NZXT white products are expected to hit retail in October.

iworrall
Good.
I've recently started a white/silver era on my “Trigger's Broom” PC, having fitted a 3080FE, and then transferring everything into a Lian-Li O11D-Mini Snow.
Switching the now somewhat elderly Corsair H115i (non-RGB) for a white Kraken Z63 will suit it nicely.

I've got a hamster on a wheel driving the pump through my aquarium and cooling my CPU. I do get the occasional overflow when the hamster goes diving, however.
Posted by mers - Thu 23 Sep 2021 16:48
Bit of masking tape , aerosol can , very cheap. Might do mine in skyblue pink. lol. If I went for an AIO which I have no plans to do I'd go for the Artic Cooling one , seems to be up ther with things costing twice the money.
Posted by Ttaskmaster - Fri 24 Sep 2021 21:14
Ah, but this is HEXUS and no-one likes to even see the inside of their case, never mind have anything in colours or lit up, no?

TBH, they just need the outer made in materials that are easily painted, as people will want more than just black or white… and will likely want to change if they ever upgrade their kit from, say, ROG Red to ASRock Yellow…