The latest AAA PC title to get the Nvidia DLSS treatment is Call of Duty: Warzone and Modern Warfare. The AI and Tensor Core accelerated super sampling tech can boost Nvidia RTX graphics card performance by up to 70 per cent at 4K, according to Nvidia's testing. The DLSS-ing of modern AAA games seems to be accelerating with it being available from the launch of Outriders at the start of the month, and the tech coming to Unity later this year. At the time of writing you can turn on DLSS in over 40 titles and counting.

Call of Duty: Modern Warfare is one of the most popular gaming titles on any format, but many would agree the PC is the ultimate platform for it. From the release of the latest CoD update from Activision today, you will be able to toggle on DLSS via the Options menu in Call of Duty: Warzone, Modern Warfare's multiplayer modes, and Modern Warfare's co-op Spec Ops mode. 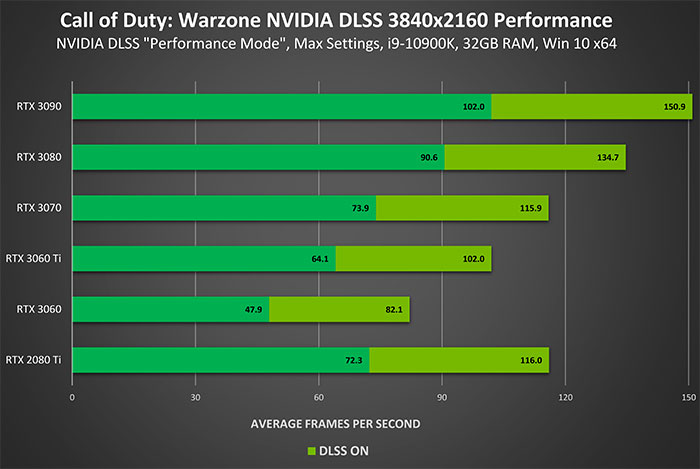 After applying DLSS, Nvidia reminds users they can enjoy the boosted performance or reinvest the released horsepower for higher resolutions and rendering details. Check out the pure performance boost 4K chart above which compares all the new Ampere GPUs, as well as the older RTX 2080 Ti. Charts for 1440p and 1080p are available on the GeForce blog.

While we are in the mood for CoD News, it is worth highlighting that this hugely popular game has reached "two incredible milestones". The CoD blog reports that Warzone has surpassed 100 million active players globally. Fans have battled in 28.8 billion competitive matches.

Looking at the CoD franchise as a whole it has accounted for 400 million paid/premium games sales since the very first Call of Duty launched back in October 2003. 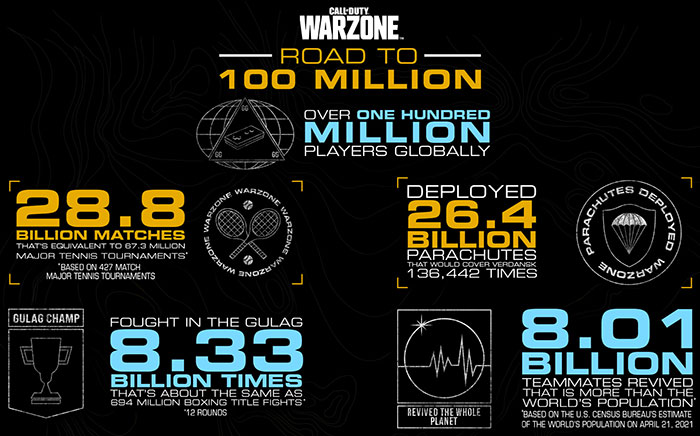 Remember, if you feel like a dabble in Warzone it is free to play, but it is a weighty download which will eat 175GB of your PC storage.

Yeha, I thought it was fine, did a small 3Mb update, then started copying 26.50Gb of data, presumably a backup before it then started downloading the 26.06Gb of actual update lol

See how long that takes, planning on playing tonight as well as the missus is out, hope its done by about 7 then lol
Posted by tapmybuttons - Wed 28 Apr 2021 12:46
Glad more games are adopting the DLSS technology, its a win win for gamers especially those with high refresh rate monitors or those trying to drive 4K and 3440x1440 on a budget such as myself