CD Projekt Red has released the latest patch for Cyberpunk 2077, and it is a big one whatever metric you size it up by. The full list of changes is available on the Cyberpunk changelog here, but I'll try and give a good summary of the important changes below, to reduce the mileage on your mouse scroll wheel. Additionally, the official development blog looks at some update specifics, with video examples, here. 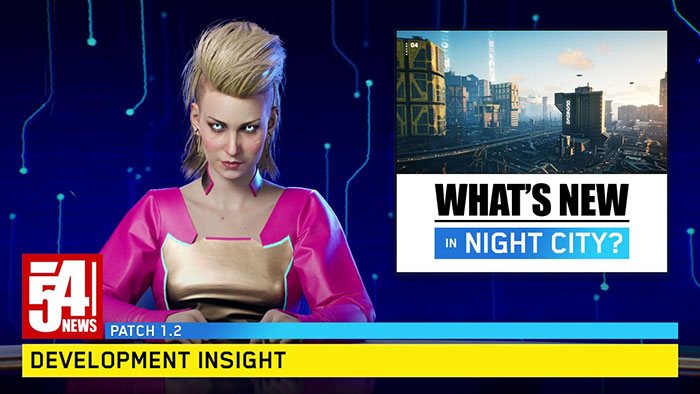 The Cyberpunk 2077 patch 1.2 is now available on all platforms and the download size you can expect is approx 33GB on PC via GOG, and of a similar magnitude on consoles. Of course Stadia players don't have to do any updating as it is done server side.

Moving onto the list of game fixes and a majority of them are remedies for errant NPC behaviour, unusual environmental interactions, and what you would commonly describe as glitches. However, there are some important gameplay quality fixes concerning vehicle driving mechanics, the unsticking of vehicles, and how close the local police can spawn in when crimes are committed.

Unstick your vehicle with new rotating and rocking controls

Quests and specific open world interaction features also come in for lengthy lists of corrections. Graphics, audio, animation and UI game features are all overhauled too, and the game is given a further shot of stability and performance improvements. Overall users should see fewer crashes now thanks to fixes applied in the rendering engine and memory/memory management optimisations. CDPR also mentions that it has made optimisations that will be particularly welcome on last generation consoles and lower performance machines.

There are 11 PC-specific updates detailed by CDPR. An important one for AMD RDNA2 GPU users – you can now turn raytracing on in this game, as long as you have the latest drivers for your Radeon. Other PC specific updates revolve around keyboard controls, Epic Games Store achievement syncing, modding, grenade gameplay, 8K display issues, and some 4K and 5K ultra-wide UI display issues.

If you play Cyberpunk 2077 and have installed patch 1.2 already it would be very interesting to hear your opinions on the update in the comments section below.

kalniel
I expect performance will be terrible with RT on, just like it is on Nvidia cards, but would be interesting to see quite how they compare. The internet hasn't caught up yet it seems.

Seen some reports from people who tried it - its not that great on RDNA2 GPUs:
https://www.reddit.com/r/Amd/comments/mg7lrc/to_no_great_surprise_cyberpunks_rt_performs_like/

It does seem AMD RDNA2 GPUs in general have more issues with RT reflections than the Nvidia Ampere GPUs,but are more competitive in other RT effects.
Posted by Spud1 - Tue 30 Mar 2021 11:09

kalniel
I expect performance will be terrible with RT on, just like it is on Nvidia cards, but would be interesting to see quite how they compare. The internet hasn't caught up yet it seems.

Can you define “terrible” :)

With a 20 series however, the performance is indeed terrible (even with a 2080ti) and I would expect the RDNA2 cards to perform similarly.

Shame though as RT makes a huge difference to the visuals in this game!

I will give this another go at the weekend I think, been waiting for this patch before i continued the story..time to give it a go :)
Posted by Friesiansam - Tue 30 Mar 2021 11:15

Spud1
Can you define “terrible” :)