Medal of Honor: Above and Beyond launches shortly, on Saturday 12th Dec, and may be the most highly anticipated VR title since Half-Life: Alyx. The game is described as an action-packed, immersive VR experience set in World War II, and it boasts a deep single-player campaign bursting with authentic detail encompassing historic events on land, air, and sea. 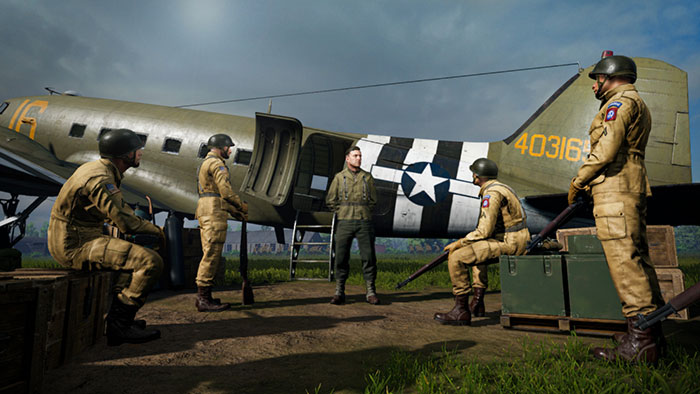 Respawn's VR game for your PC you will require one of the following headsets to play; HTC Vive, Oculus Rift, or Valve Index. You might also expect some pretty hefty specs for such an experience, and if so you aren’t wrong, as well as your pricey HMD you are advised to come packing the following 'recommended' specs:

As noted by Polygon, the storage requirements are even greater to be able to install this game. Before you start your download you will need at least 340GB free it reports. The extra space is used for temp files and so on as you install the downloaded game. Finally, when the install is over the game files will take up approx 180GB. I'd use an SSD to store this behemoth.

Other requirements seem just as strenuous, with the 8C/16T Intel Core i7-9700K equivalent or greater requirement – you will be looking at a modern AMD Ryzen 7 to compete. Steam originally listed the GPU requirement as an Nvidia GeForce 'GTX' 2080, which has now been corrected to RTX 2080 or greater. You can check out any recent HEXUS graphics card review to find GPU alternatives that are equal or exceed the RTX 2080's capabilities. For example, if you haven't already checked it out, you can see how the RTX 2080 stacks up against AMD's latest and greatest Radeon RX 6900 XT if you have time, and you will see the RTX 2080 in mid-table in most of our tests.

Posted by tharfcake - Wed 09 Dec 2020 13:14
All that for what looks like a DX9 game from ten years ago…
Posted by Ttaskmaster - Wed 09 Dec 2020 13:54
What's with the Harry Potter kid that keeps cropping up in the trailer?
Posted by Irien - Wed 09 Dec 2020 13:59
I can only assume it is to ensure that the fps stay high for smooth vr? I think you're supposed to need approx 90 fps for a good VR experience, so maybe those specs are based around delivering a solid min 90 fps at a decent resolution. Otherwise the specs and the visuals seem way out of step, which is not what we'd expect from Respawn.
Posted by Gentle Viking - Wed 09 Dec 2020 14:10
Isent it the original medal of honor game converted.
And spices up a little, for instance with red tail fly boys to satisfy the BLM people and the people who cater to them.

Okay maybe red tails was in the original it have been quite a few years since i played it.
Posted by KultiVator - Wed 09 Dec 2020 14:42
I quite like the art style - Respawn's graphics in TitanFall 1/2 weren't exactly cutting edge, but the games themselves were both very nicely done - with tonnes of nuance to the controls & tactics… kept me interested way longer than most games.

I wont dwell on what I thought of Fallen Order - after a strong opening level, that game didn't feel very Star Wars to me at all - but the graphics were slick. So on balance, I'm more into gameplay and feel than graphics (and don't get me started on the steaming piles of crud that the Dice renditions of BattleFront became - all fur coat and no knickers).

One small note to the editor: the specs I've seen suggested the Quest and Quest2 headsets are both supported as well (via the requisite link cable).