Intel launched its first mainstream eight-core, 16-thread CPU last month with much bombast. Said Core i9-9900K chip is pretty good, offering excellent performance across the thread spectrum, though due to a chronic lack of availability, the supposed $488 (£450) price point is risible. Those wanting to jump ship to the 8C16T beast need to pay at least £550 for the privilege. Ouch.

Yet the 9900K isn't the only noteworthy introduction. Rather interestingly for the purposes of market segmentation, Intel also debuted the Core i7-9700K. The intriguing part is that it is the first mainstream Core i7 chip not to feature hyperthreading as standard. Rather, it adopts an 8C8T design, instead of 6C12T of its direct predecessor, the Core i7-8700K, based on the same Coffee Lake architecture.

This at-a-glance table shows you how it compares to that 8700K. The question really is one of whether it is better to have an 8C8T or 6C12T processor for today's workloads? That's tricky to answer, which is exactly what makes the 9700K interesting.

Knowing that one generation's chips ought to be faster than the last, through a combination of the latest manufacturing techniques and use of solder-based thermal interface material, Intel jacks up the all-core speed from 4.3GHz to 4.6GHz but keeps the total amount of smart cache the same. That means it drops from 2MB per core to 1.5MB, and we presume Intel went through enough simulations to ensure 9700K is, on average, better than 8700K.

Intel, however, shows no signs of innovation or tinkering anywhere else. There's the same UHD 630 graphics, the same dual-channel DDR4-2666 support, and the same 95W TDP. We need to be careful when talking about power requirements because, clearly, the premier Core i9-9900K is not a strict 95W chip - our testing shows it to hit around 140W. One would presume the 9700K to better fit into that 95W envelope.

Per-core frequencies play a large part in determining performance, of course, so it is informative to see what Intel has done on its premium mainstream 'K' chips over the last four generations.

Though all listed processors use a 14nm process, Coffee Lake-infused chips are the only one to harness the advanced 14nm++ process, one that enables less Intel to crack the frequency whip without having to go crazy on voltages. In particular, 14nm++ is said to offer around 25 per cent higher drive current for the same power as original 14nm.

The real-world speed benefit is clear to see. 8700K offered more per-core speed than 7700K at low thread counts, while 9700K takes that to a new level for each core. It is faster on eight cores than 7700K was for just one. 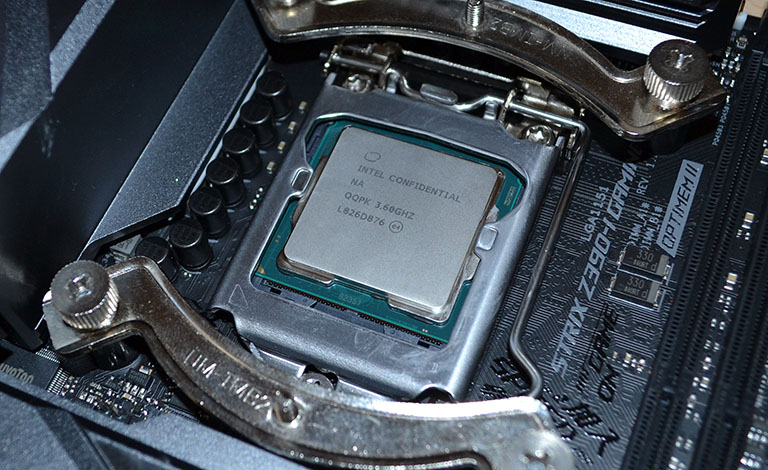 As we have made specific mention of the Core i9-9900K pricing, it is only fair to do so for this review chip. Though it should come in at £350 if stock was plentiful, the same volume constraint applies. You can expect to pay £450-plus for this model, which is way more than, say, the £300 asking price for the rival AMD Ryzen 7 2700X (8C16T), for example. What's more, Intel doesn't provide a heatsink-and-fan unit anymore, thus increasing the cost further if you don't have a cooler handy.

Let's now examine the straight-line and value performance metrics and determine how it all shakes out.