Ubisoft announced Assassin's Creed: Valhalla at the end of April. Even if you haven't read about this game or seen the world premier trailer you will know from the name that this release takes the franchise to the era of the Vikings. Now, as the game release date closes in (Tuesday, 10th Nov) Ubisoft has treated gamers to a 'Deep Dive Trailer' with seven minutes of narrated illustrative gameplay for you to take in. It has also shared the PC system requirements for the game.

Above you can see the latest preview video for Assassin's Creed: Valhalla from Ubisoft. It reveals aspects of the action RPG gameplay experiences such as growing your settlement, customising your Viking, and planning raids on the kingdoms of England, and beyond. There will be plenty of chances of visceral and brutal combat too, of course, and we get to see some ways in which your skills will be enhanced as you progress through the game. A wide range of weapons will be bolstered by your chance to discover exotics, you will even be able to get your hands on Excaliber… 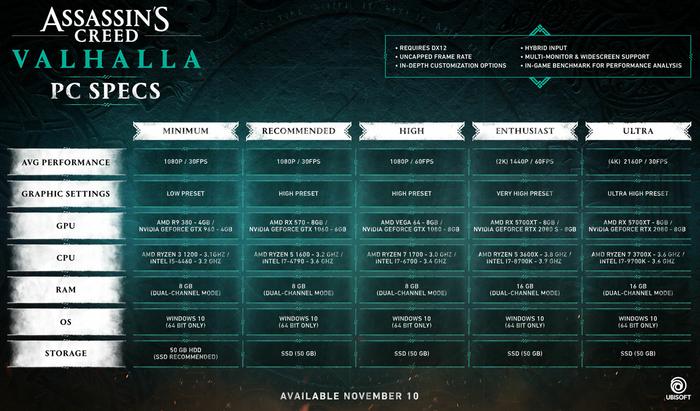 PC version specs, for a wide range of systems / performance targets are revealed in the table above
(click to zoom image).

The six configurations provided by Ubisoft reflect the diverse PC ecosystem, from those aiming to enjoy the game at 1080p 30fps, to the Ultra fan who will be aiming to play the title at 4K. The middle-diddle 'High' settings aiming at 1080p at 60fps, state that you will require a PC packing a quad-core processor of Ryzen 1 / Skylake generation, an 8GB GPU such as the Vega 64 or GTX 1080, plus 8GB of RAM and 50 GB of SSD space. The game is Windows 10 64-bit only and it uses DirectX 12.

Assassin's Creed Valhalla is also coming to Xbox Series X / S, PlayStation 5, Xbox One, PS4, Stadia, and will be playable on Amazon Luna when the Ubisoft channel goes live. Remember, the release date is 10th November. 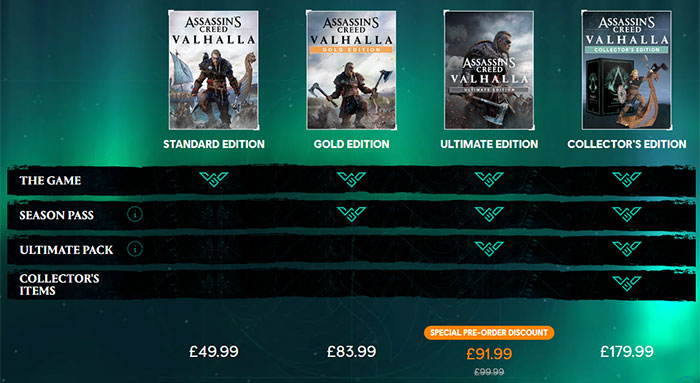 In another bit of Ubisoft news, AMD has added Far Cry 6 to its Rewards program. The latest Far Cry game will be a bonus available to purchasers of select Ryzen 5000 processors. The T&Cs page reveals that you can snag the Far Cry 6 Standard PC Edition Digital Download if you buy the AMD Ryzen 9 5950X, 5900X, or Ryzen 7 5800X from participating dealers worldwide starting from 5th Nov 2020 (yes, that is when these CPUs are set to become available) but no later that 30th January 2021. As usual, if you are interested in this bundle make sure that the retailer you choose is participating. Here in the UK I can see that the likes of Box, CCL, Ebuyer, OC UK and Scan will have you covered.

LSG501, this game is too big and modern to cover that. you want 60FPS then you go Low setting. And even then you might not get it. It's more than just graphics, the game world with all the characters etc have an impact.
Posted by Bagpuss - Thu 15 Oct 2020 10:57
Oh look, insane system specs for yet another incredibly average looking Ubisoft game..what a shocker!
Posted by Zhaoman - Thu 15 Oct 2020 11:27
Maybe I'm just getting old but £100 for a game, wow…
Posted by Gentle Viking - Thu 15 Oct 2020 11:42
I will not insult my forefathers by playing this.