Last month HEXUS reported upon an important milestone in the development of the Command & Conquer Remaster. The game had reached 'content alpha' status meaning that there are no longer any legacy / placeholder pieces of content in the 4K game remasters. Earlier this week EA lead producer Jim Vessella took to YouTube to talk through the continuing project, this time concentrating upon the fondly-remembered FMV sections of the games. These FMV sections told the C&C story as you progressed and moved from mission to mission and scene to scenario.

In the video above Vessella talks through his quest to unearth the source video footage for the FMV many C&C veterans will be familiar with. The problem for the remaster developers is that all they have (had) is highly compressed 320 x 240 VQA files from the PC editions of these games. The original footage had simply "gone missing in time".

Vessella tried to source old masters and related materials by contacting EA LA where Westwood and Victory Games archives would b expected to be held. After an initial scare that a host of media once belonging to Westwood and Victory Games had been sent to "the dumpster", Vessella was relieved to learn someone in the office noticed the source of this material and redirected it to EA LA storage rooms.

Flying from San Francisco to LA to peruse the C&C archives Vassella was initially disappointed to find the digital tape footage he found (potentially HD) was in an oddball or now rare format - only one business on west coast USA could digitise it for modern computer consumption. After waiting a few days a hard drive came from that business but it was only backups of the low-res footage…

The original footage contains what some would call irreplaceable performances - so the remaster developers simply need to re-use the videos they have. Admittedly the PC files at 320 x 240 at best and 15fps are rather ropey for remaster work but a better source was found… Vassella sourced, with the help of the community, Sony PlayStation game MPEG FMVs - which were better than the PC material available. PSX FMVs were sometimes up to 640 x 480 interlaced. 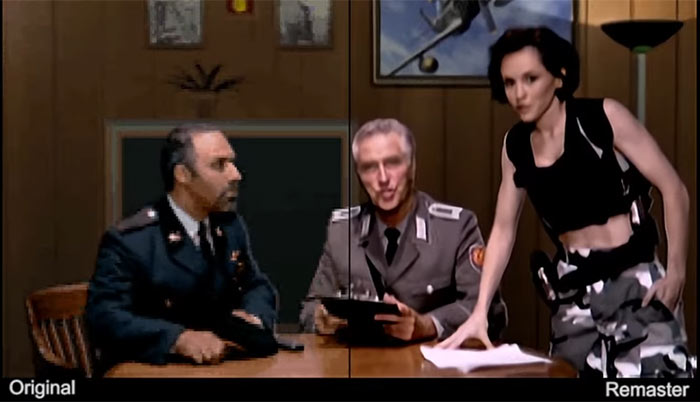 The results of frame rate and pixel upscaling is shown in the embedded video from 11 mins 20 sec onwards. Since becoming happy with the "AI upscaling" process all the C&C videos videos have now been through it. Unfortunately the PlayStation version of the game missed out on about a dozen videos, so the poorer sources have to be used.

Using the PS1 video sources means that there is a further unexpected upside - General Carvill was introduced in these videos, so expansion missions and stories have been structured similarly to console version.

Another positive is that four hours of b-roll and green screen footage, featuring many major characters, was found and it will all be included in the remaster - via the 'bonus gallery'. The gallery will be unlocked incrementally as rewards for working your way through the missions in the remaster. 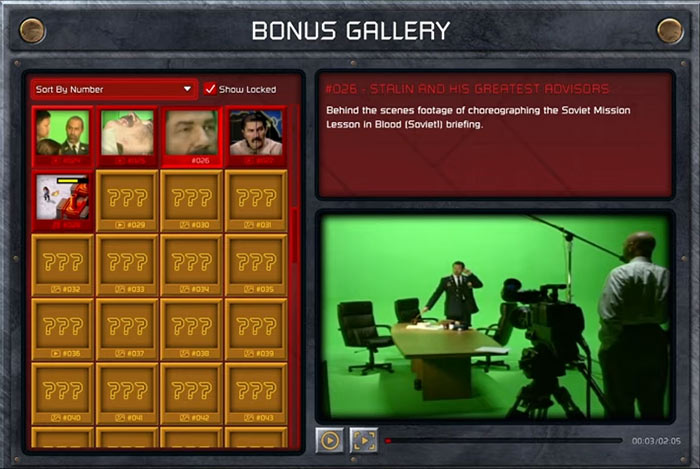 Last but not least Vasella teased there would be another exciting announcement on Monday 9th March.

Posted by AGTDenton - Fri 06 Mar 2020 12:16
Wow a great video from EA.
Huge shame the original footage were lost, but in a way I liked the pixelation of the game videos.
I thought it worked really well as an effect.
Posted by Gentle Viking - Fri 06 Mar 2020 12:28
TBH i think i would just have re-shot those sequences with new actors.
To me those parts are secondary and don't need to deserve to stay 100% faithful to the originals, and IMO it would be better than going with the old material, though that's also a avenue.
Posted by Output - Fri 06 Mar 2020 14:02
It's very disappointing that the original source footage was lost.

Hopefully the upscaling can be done as carefully as possible for it to look as good as possible.
Posted by KultiVator - Fri 06 Mar 2020 20:42

Gentle Viking;4181525
TBH i think i would just have re-shot those sequences with new actors.
To me those parts are secondary and don't need to deserve to stay 100% faithful to the originals

I'm with the Viking in wishing they'd just re-shoot the video sequences, as the originals were pretty poor and very hammy!

I know that kind of thing holds charm for some people, but if this is going to be a premium priced remaster, perhaps the original vids would have been better served up as bonus material - especially given the strength of the free of charge OpenRA project
Posted by simonpreston - Fri 06 Mar 2020 21:08

KultiVator
the originals were pretty poor and very hammy!

That was the entire point, though. The games have their tongue firmly lodged in its cheek, throughout the series. Take away the ham and it's not half as fun.