Blizzard's World of Warcraft Classic is live. This "labour of love" is available globally to all WoW subscribers at no extra cost, and should appeal to "grizzled veterans and hardy newcomers alike," say the developers. World of Warcraft Classic is a modern but authentic re-creation of the pre-expansion game in its most feature-complete state, as it was during 2006's 'Drums of War' update (patch 1.12.0).

"It’s been a long time coming, but we're overjoyed to welcome our friends new and old to classic Azeroth," said J. Allen Brack, president of Blizzard Entertainment. "The community's excitement is infectious and deeply motivating - it's clear they're as thrilled as we are to relive the World of Warcraft Classic experience. We look forward to rediscovering its wonders and challenges together with them, starting today."

Ahead of the game and servers going live, Blizzard opened new WoW Classic realms to accommodate more than two million players who have readied characters for the game's launch. However, it warned that realms with high or full population tags will likely have extended login queues, and urged players on them to head to one of the new realms to spread server load. 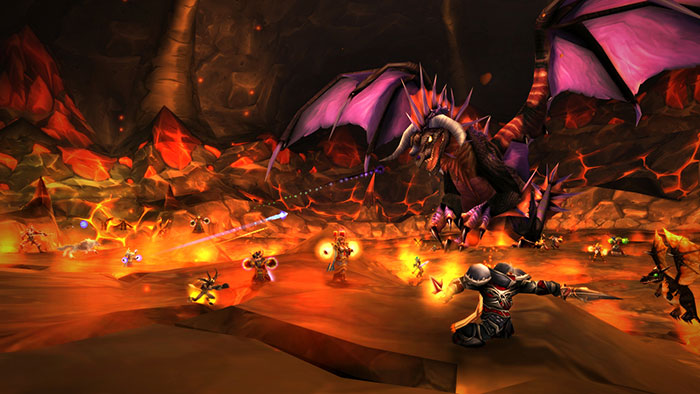 Indeed the servers have been very busy, with PC Gamer reporting that some WoW Classic servers have >hour-long queues to get into the game with queues >10,000 deep. The magazine said that once in the game the congestion wouldn't be good for performance "making it nearly impossible to complete quests that involve killing monsters".

Blizzard announced that WoW Classic heralds a celebration of WoW's 15th Anniversary over the coming months. The first 'festive' occurrence will be an in-game event in World of Warcraft's latest expansion, Battle for Azeroth, in which max-level players can participate in a special raid that brings together some of the mightiest raid bosses in WoW's history. Time limited bonuses will be gifted to anniversary event players too. Further details of the festivities will be shared in coming weeks.

Looking forward to getting back into it tonight - I really enjoy the original game mechanics, e.g. proper talent trees, more sensible levelling times, no built-in quest radar, weapon skills etc…but one thing I have been reminded of is just how inferior hte original blizzard interface is compared to modded UIs. Luckily most of the mods I used to use back then have been remade for classic, so just before the servers died I was able to get tha tback up and running which makes a huge difference! Not decided yet if I will stick to my “classic” mod setup or install the classic version of ElveUI just yet.

Either way I expect the experience to be improved tonight as Blizzard have added more shards and spread the playercount better, so should be fun! Note I didn't see any queues at all on pyrewood last night, but that may be because the server kept crashing ;)

edit: the queue times seem to be highest on the PVP realms. I find that a bit odd, given that PVP in wow is an awful, boring, tedius waste of time for players and developers. The PVE servers seem to be OK.
Posted by Tabbykatze - Tue 27 Aug 2019 14:48

Spud1
edit: the queue times seem to be highest on the PVP realms. I find that a bit odd, given that PVP in wow is an awful, boring, tedius waste of time for players and developers. The PVE servers seem to be OK.

Tabbykatze
That's because you're not a ganker or a mighty morphin pally ranger :P

Spud1
Of course not, I play Horde, not the dirty alliance :) We don't have loladin's with their magic bubble cheats :)

Ah yes, Classic, back when the Horde weren't responsible for most of the horrors and hatreds throughout Azeroth! :P
Posted by DanceswithUnix - Tue 27 Aug 2019 15:45

Tabbykatze
Ah yes, Classic, back when the Horde weren't responsible for most of the horrors and hatreds throughout Azeroth! :P

But they were responsible for Barrens chat :D

Still resisting signing up here. But… is there Alterac Valley?