Ubisoft has confirmed that it will reveal a new Assassin's Creed game at E3 in 10 days time. It looks like the publisher's hand was 'forced' to come up with an official teaser after a merchandise leak yesterday. That leak was a photo of an ancient Greek style helmet keychain. On the packaging you could clearly read 'Assassin's Creed: Odyssey'.

Above you can see the very brief teaser trailer. The 5 second action sequence is set on a coastal cliff edge. You see two soldiers standing next to each other wearing contemporary ancient Greek style armour and helmets. Immediately the soldier on the left gives the soldier in blue a mighty kick, who then falls to an unfortunate fate - into the water or rocks below.

The new game might take some influence from Homer's Odyssey, a famous ancient Greek epic poem mainly about the Greek hero Odysseus king of Ithaca, and his journey home after the fall of Troy. In a more direct reference to the action in the video Polygon reports that, in the popular movie 300, the Spartans kicked Persian messengers into a well ahead of the Battle of Thermopylae in 480BC. 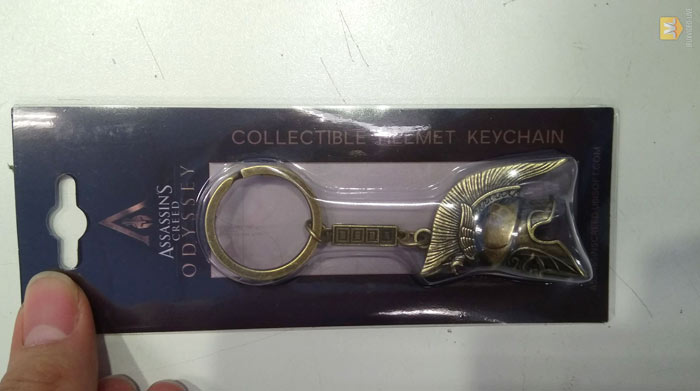 As the YouTube teaser ends - Assassin's Creed: Odyssey - see you at E3 - we should find out a lot more about this game on Monday 11th June, during Ubisoft's main E3 press conference.

As for the gameplay, there are a few hints from games culture magazine Kotaku's sources. The new title is supposed to add more RPG elements, with dialogue options for the first time, and allow play as new male or female protagonists.

Posted by OilSheikh - Fri 01 Jun 2018 19:22
Ubisoft have still not understood what made the first few AC games great.
I felt no connection with the Egyptian one and now there's a Greek one!
Posted by silent - Fri 01 Jun 2018 22:26
i must admit, the last one was superb. cannot wait for this one.
Posted by Rejuvination - Sat 02 Jun 2018 02:12
“ with dialogue options for the first time, and allow play as new male or female protagonists.” but .. wasnt ac about history? wheres the history immersion if you play as a custom character? and dialogue options means multiple endings for quests… again… changing history..
Posted by Tunnah - Sat 02 Jun 2018 06:27

OilSheikh
Ubisoft have still not understood what made the first few AC games great.
I felt no connection with the Egyptian one and now there's a Greek one!

AC:Origins was the best Assassin's Creed in years, and was a much-needed refresh in both style and substance. No more downright terrible combat with zero depth, character progression that feels like an accomplishment instead of just unlocking the ability to carry/throw/shoot more. And the story was the best installment since..well, since they were on the rails a bit ha. I loved the big reveal, how they're the first, and how they're now going to go and spread out, affecting the varied empires that were around in ancient times, it's way WAY cooler than “oh look, there's randomfamousperson, I guess he helped the Assassins. Kinda neat”.

I felt more connection with AC:O than I did with the crappy siblings in the previous one lol.
Posted by Korrorra - Sun 03 Jun 2018 22:18
Discovery Tour for Odyssey also. Ubi needs to make it a thing for these AC games.