After eyeing the likes of Rovio making millions by selling endless iterations of a tarted up artillery game for free/pennies, other video games companies have been pondering making more use of the free-to-play (F2P) model made fashionable by the mobile and social games platforms. In Ubisoft’s recent conference call they revealed that internet connectivity and chargeable downloadable content will become more important than ever to the monetisation of games.

We have already mentioned the upcoming Wii U full game download system, with Ubisoft being a major player in the Wii U launch with 7 titles lined up. Ubisoft intend to bring free-to-play games to the Wii U to make money from selling items within, and extensions to, the games. An early example of this charging system is within Ghost Recon Online where, according to Wikipedia, players will “rent a gun” for a period of time. The Windows version is confirmed as free-to-play but we haven’t heard if the Wii U version will be exactly the same as yet. According to the report on the MCV gaming news website there will be quite a few other games for next gen consoles featuring in game buyables and purchasable unlockables. 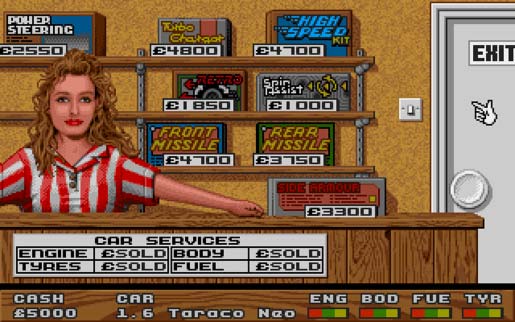 Thankfully Supercars on Amiga/ST didn't need real money for the custom shop upgrades to your car.

Colin Sebastian of Baird Equity Research told MCV; “UbiSoft expects this to drive better monetization than what is commonly available in the current generation. We believe the F2P model on consoles, as part of a broad multi-platform strategy (phones, tablets, connected TVs) could drive a higher level of profitability per franchise. In addition, developers of Facebook and Mobile/Tablet games may discover a new platform opportunity for their titles in the next console generation.”

It will be interesting to see the financial results of the Ghost Recon Online launch on Windows and Wii U. Gamespy, in the previous link, think it’s a great game which, in the Windows version they played, you need not spend a penny to compete fairly with players who have paid for extras. Everything in the game was unlockable with time. Everyone likes “free” and it’s not usual to get free big budget games on a console legally. A good selection of playable high quality F2P games available to Wii U could help it succeed if they get a good head start on Microsoft and Sony F2P development.

Posted by FRISH - Wed 16 May 2012 19:36
I prefer one time payments ):. Then again I've not bought much recently, lost interest in recent years.
Posted by zaph0d - Thu 17 May 2012 00:10
This has happened in the games community before. It used to be called Shareware back in the 80's & 90's.
You'd get a game with a lot of playability, the whole first episode and if you liked it you'd buy episodes 2-x usually 4 or 5 total episodes in a game. I think Quake was the last of the Big Shareware games.
Posted by OilSheikh - Thu 17 May 2012 07:28
Ah, shareware - the goold old days!
Posted by Smudger - Thu 17 May 2012 08:42
Fine for Facebook/mobile games, for proper PC or console games, I'd rather pay up front and get the lot… Insert 20p to get to the next stage, my @r5e!
Posted by crossy - Thu 17 May 2012 11:01
Last game I bought that had this was Galaxy On Fire for my tablet. There you got the first couple of solar systems for free, but if you wanted to advance then you had to pay an “unlock” fee for the rest of the game. This seemed pretty reasonable to me - since you got to “extended test” the game.

What I wouldn't be happy with is some kind of wonky “parking meter” arrangement where you paid for a certain amount of play time. Sure, that might work for MMO's, but to apply it to - for example - Call Of Duty MP, would be ridiculous. Or BF4 (or similar) where you hypothetically get a knife and pistol for free, but if you want M16, Javelin, grenades, claymores then you have to pay for each.

If it moves us console gamers from the position where you buy a (full priced!) game and then discover that you really need to buy “optional” DLC, (which is only optional if you don't want to play the game properly), then fine with me.