Microsoft shared some gaming industry strategy outlines ahead of the first-ever Xbox and Bethesda Showcase on Sunday, in a conversational piece featuring Head of Xbox Phil Spencer hosted a series of conversations with Satya Nadella, CEO of Microsoft. The Xbox Wire published feature is all about Why Microsoft is 'All In' on Gaming, how it sees the competitive landscape, and how it is going to press forward over the next few years. A follow-up article with more specifics was published with some highlights of the day, and more specifics about Microsoft's planned execution.

The big news from Microsoft is encapsulated by our headline regarding a new app for connected TVs and the introduction of Microsoft branded streaming hardware, for those who might have older TVs upon which the app won't be made available.

So, Microsoft is working alongside TV manufacturers to make its Xbox app available. Making Xbox Game Pass available on more screens "Xbox is working with global TV manufacturers to embed the Xbox experience directly into internet-connected televisions with no extra hardware required except a controller." Only needing a controller is a great way of removing friction from the adoption of the service, especially to those who are casually interested in dabbling in modern gaming.

In addition to the above, The Verge quotes Liz Hamren, head of gaming experiences and platforms at Microsoft, as saying "We're also developing standalone streaming devices that you can plug into a TV or monitor, so if you have a strong internet connection, you can stream your Xbox experience." It would make sense for this streaming HDMI stick or box to be accessibly priced. 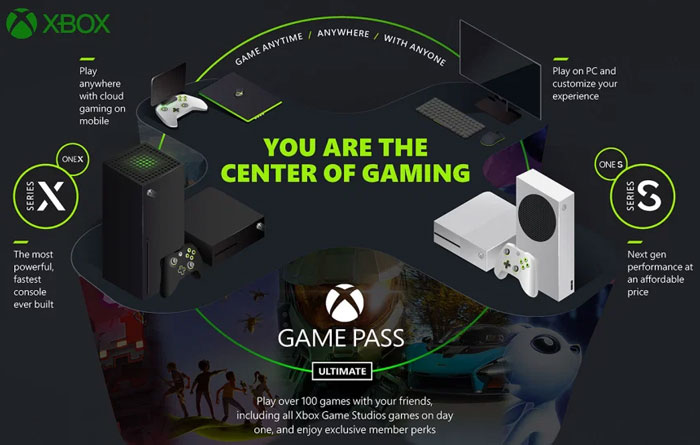 Other Microsoft initiatives to widen the appeal and accessibility of xCloud include;

Last but not least, Microsoft intends to keep its foot on the gas with games development. It highlights that it has 23 games studios creating Xbox titles, and it is aiming for this resource to output "at least one new, first party game into Game Pass every quarter".

At the time of writing, we don't have specific dates for the introduction of the Xbox TV app and xCloud streaming stick. Microsoft said the TV app is coming soon.

Cool that they're now also on the verge of deploying the next-gen server blades - these have chipsets based on the latest XBox consoles - and could be the closest many of us will get to any next-gen hardware for a while.
Posted by tazzrats - Fri 11 Jun 2021 10:49
If Microsoft can actually use their position in the market to do what stadia for some reason didn't: create high resolution low latency game streaming, then they could be on to a real winner here.

Ngl, I love having my PC, but man, this is good for all of us that game, more money, more ISPs, more people in online servers, exciting times!
Posted by jimbouk - Fri 11 Jun 2021 11:06
I wonder how the environmental impact of streaming vs downloading vs physical copy stacks up? I guess the last two aren't a good comparison for games due to the number of patches, but how many times do you have to listen to a CD/vinyl before it's better for the environment than streaming? And how does a little stick, data centre plus all the bandwidth compare to a console in your living room?
Posted by Yoyoyo69 - Fri 11 Jun 2021 11:35
Microsoft yet again moving forward, whilst Google goes backwards. Really putting the pressure on them.

This is also possibly the closest they have ever came to seriously challenging Valve/Steam.