As Nvidia marks the second anniversary of the launch of its games streaming service, it has decided to shake up its memberships and service. In an email to HEXUS Nvidia said that from today Nvidia Founders memberships are no longer available, instead those who wish to pay for an elevated level of service will be steered towards Priority membership.

Priority membership is an offering with exactly the same service level as the Founders membership provided (see membership benefits chart below) but things are going to be more expensive from now on. As a thank you for existing Founders members, Nvidia has introduced the Founders for life benefit which locks in the special $4.99 / £4.99 introductory rate as long the account is in good standing. Priority members will be paying $9.99 / €9.99 / £8.99 per month starting from now. Yearly rates of $99.99 / €99.99 / £89.99 will also be available. 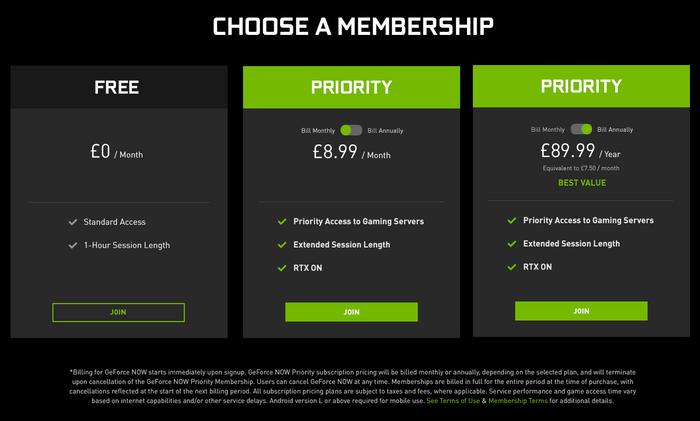 Nvidia is keen to explain how it has improved GeForce Now over the last year, which goes some way to justifying these price hikes. It lists the following key upgrades:

It goes on to assert that upgrades and benefits are set to grow, with particular attention to streaming quality and ease of use, and adding more games.

One upcoming improvement that might interest potential subscribers is the new adaptive V-sync technology, set to arrive with the 2.0.28 update in about a week's time. This feature synchronizes frame rates at 60 or 59.94Hz at the server-side to match the display client-side, reducing stutter and latency on supported games. Moreover, a new adaptive de-jitter technology will enable us to increase bit rates for improved quality over choppy networks, too.

Another nicety worth anticipating is the account linking of key games, as well as pre-loading updates to cut load times in about half. Nvidia's busiest data centres are all getting additional capacity, and a new data centre opens in Montreal in the coming months. As for new regions, Nvidia has recently partnered with network providers in Turkey, with Saudi Arabia and Australia.

Since it is again GeForce Thursday, 7 new games have been added to GeForce Now. These include:

iworrall
Any bets this membership will be required to purchase “Founder's Edition” GPUs in the future?

Yes I'm being cynical but at the same time with the shift to everything being subscription I wouldn't be surprised if it did happen (no I wouldn't like it either)
Posted by Iota - Thu 18 Mar 2021 18:30
I got this free with my 3090FE, haven't even thought about using it.
Posted by Euphonium - Fri 19 Mar 2021 22:32
I hadn't even heard of this before, but I've got no more interest in renting games through this than I had in any other media streaming service.
Posted by virtuo - Sat 20 Mar 2021 18:45

Euphonium
I hadn't even heard of this before, but I've got no more interest in renting games through this than I had in any other media streaming service.

You can't even do that, you can only stream games you already own

If they support it.