EA got in hot water with fans this weekend as a Reddit post complaining about in-game advertising in a premium paid-for game gained traction. The game in question, EA Sports UFC 4, is a fighting title which sells for approx US$60, so EA choosing to monetise it with full-screens ads really angered the community. EA has thus made a quick U-turn and removed this obtrusive ad integration with a promise that it won't reappear in the future.

UFC 4 was released approximately a month ago, so for obtrusive full-screen ads to appear was a bit of a nasty surprise to early adopters. Additionally this 'feature' wasn't discussed in early reviews of the title, as it was pleasantly absent. The ads, for Amazon show The Boys, were injected into the action replay segments of the game - an integral part of a sports fighting franchise. These video ads blocked out the gameplay being reviewed and were programmed to appear at the beginning / end of the replay segments. 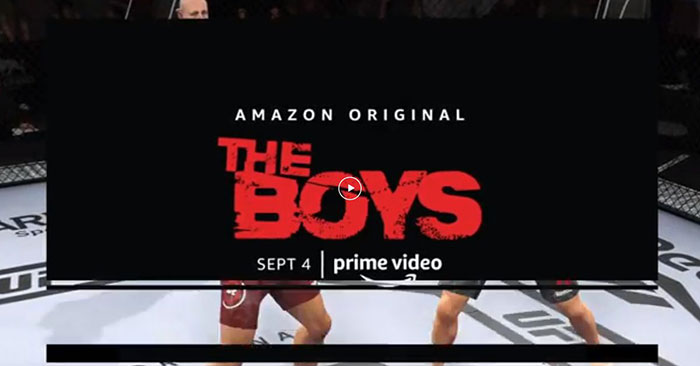 The original complaint post on Reddit has since garnered over 90,000 upvotes. You can see in the user embedded video that the ad briefly flashes up at the beginning of a replay segment, then it flashed up again before you resume gameplay. The 'flash' is quite brief with the name of the show, that it is on Amazon Prime Video, and the premiere date. With such a brief ad flash there is no close box for the ad or other such interactive elements in it. You will notice that the game already contains an ad for 'The Boys' on the fighting ring canvas.

On Sunday an EA Team Member officially responded to the complaint on Reddit. CoreySA explained that EA turned on ad placements in replay moments in gameplay last week but this kind of advertising isn't new for the UFC franchise. However, CoreySA did go on to add that the unwelcome ads have now been disabled and were not welcome. Last but not least the official apologised for the disruption the ads might have caused and asserted that such ad integration in replays "will not be reappearing in the future".

In a paid-for premium title, which was launched and reviewed without such intrusions, the community reaction has been loud and damning. People power seems to have won this bout, but where will publishers be injecting their ads next?

Posted by Tabbykatze - Mon 07 Sep 2020 12:33
They're not sorry, they were testing the waters to see if they could drop them in and were likely very ready to remove them if the backlash was minor or so.

They want as many income revenue streams as possible and if they had scoped this with any focus groups of people will at least 2 brain cells to rub together, I'm willing to bet money they would have said no i wouldn't want to see it.

However, they likely did do a focus group but they worded it like “an unobtrusive ad flash while playing” and being very deceptive about how it would be presented…
Posted by Hoonigan - Mon 07 Sep 2020 12:39
Adverts in games aren't new, and there's money to be made from them. Racing games putting paid sponsors on the side of race tracks for example, but this is just beyond a joke.
EA know what they're doing, and they have people cornered by their dominance within this sector, owning the IP for football, NFL, NBA, UFC, etc. etc., so where do people really go?
It only feels like 5 minutes since the whole lootbox issue, it's clear they're not learning their lessons and are in this purely to generate as huge a profit as possible, regardless of their impact on how enjoyable the gaming is.

????
Posted by excalibur1814 - Mon 07 Sep 2020 12:43
EA destroyed Command & Conquer, then messed with Plants Vs Zombies (Which WON game of the year) by making PvsZ 2 a mess of ‘grind or pay to win’. Sim City Buildit? Disgusting. Another grind game where it's heavily stacked against the player.

excalibur1814
EA destroyed Command & Conquer, then messed with Plants Vs Zombies (Which WON game of the year) by making PvsZ 2 a mess of ‘grind or pay to win’. Sim City Buildit? Disgusting. Another grind game where it's heavily stacked against the player.

We keep on buying!

Unfortunately ‘excessive grind to make you pay’ seems to be a huge trend with games at the moment, even premium ones where you pay to get the game… whatever happened to the ‘fun’ aspect of a game.

It's kind of understandable with free to play games but even they can go too far, one of the games (f2p warframe) I've been playing for around 4 years just released an update and I just can't even be bothered to play it because the entire update is just so grindy in it's design it's off putting… it wouldn't be bad if the new update is actually ‘new’ but it's essentially just a rehash of 2 earlier open worlds with the worst aspects of each added in.