The official Apex Legends Twitter account has announced that the game has hit 50 million players worldwide. Moreover, the feat was achieved in a single month. This free-to-play game was released onto an unprepared public on 4th February and is available for PC, Xbox One and PlayStation 4.

Game market intelligence expert Daniel Ahmad of NikoPartners, addressed the elephant in the room - How well is Apex Legends doing in comparison with Fortnite Battle Royale? The answer can be seen in the bullet points he shares but the key stat is that while Apex Legends has reached 50 million players in 4 weeks, it took Fortnite more than 16 weeks to reach this milestone. 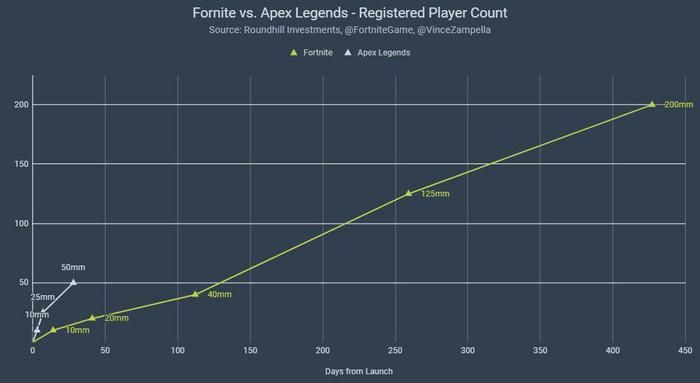 Roundhill Investments put together a chart comparing the two games' ascent. According to this chart Fortnite reached 50 million players in 17 or 18 weeks. Nevertheless, there is still a long way to go until Apex Legends will near Fortnite's colossal 200 million players. In terms of Twitch views, Apex Legends has already got really close to Fortnite as you can see in TwitchTracker.

In some ways Apex Legends cleverly benefitted from Fortnite's success. Fortnite spent some time in the f2p wilderness, relatively speaking, before it implemented its Battle Royale mode - but on the other hand that gave it an immediate audience. However there is now a ready-made audience of gamers who are 'Battle Royale fans' who leapt onto this free offering from heavy hitters EA and Respawn. After pleasing first impressions, the game has gone viral among this audience and their friends. 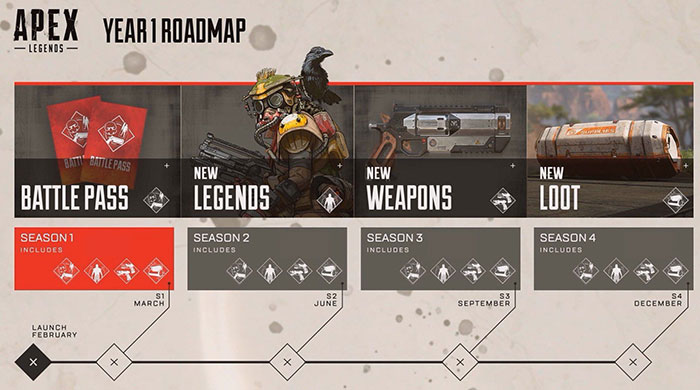 A Battle Pass for Apex Legends will arrive sometime this month. Introducing this pass will be a major opportunity for EA to monetise Apex Legends and it will hopefully strike the right balance and offer good value so it is well received. Season One, starting this month, will see the introduction of new Legends, weapons, loot, and more.

With Fortnite and PUBG season passes costing about US$10, there is no reason to think EA's pricing strategy will differ. Official hints and data miners seem to indicate that there will be both a 'free' and 'diamond' battle pass. Any items in the battle pass should also be unlockable through gameplay.

Apex Legends for PC is available for download via Origin.

Posted by Spud1 - Tue 05 Mar 2019 13:00
I finally decided to give this a shot this weekend. My intial impressions after 2 hours were that it's kind of fun, but it's not going to take me away from PUBG and it really doesn't have the same addictive quality for me. It's a bit like a cross between Fortnite and COD Blackout - very arcadey in style and a bit of fun, but I am dubious about it's long term lifespan. I think it's gathered a lot of interest very quickly, but the long term player count remains to be seen.

Positives:
Much more fun than fortnite - the first person perspective makes a huge difference, and not having a building mechinic is a huge plus.
The gunplay is good, engaging, and the weapons feel satisfying in general
The “ping” system is great, and other games would benefit from this hugely
The “Jump master” and “Jump together” feature is similarly brilliant
It's free (mostly) making it instantly accessible to many
the UI is fairly clean and easy to use on PC at least
It does remind me of a titan fall game, and feels similar
Graphics are OK - not amazing but then it does mean it runs happily at over 140fps

Negatives:
The player cap is a furstration that needs to be addressed - in most games you either hot-drop and have instant fights, or drop to loot and spend 20 min doing nothing before finally seeing another player. 60 players is at least 40 too short.
3 man teams is another annoyance - I assume this is linked to the 60 player cap, but its really annoying
Lack of solo play is another frustration, BUT after playing it I see why they have done it, as making this game balanced in solo mode would be a total nightmare thanks for the hero power mechanic
Recoil seems a bit too easy to control (compared to say PUBG) but this has pluses and minuses ;)
I personally hate the specialist/hero power system, as it takes away from this being a “Battle Royale” game when your characters/teams are immediately unbalanced. There are objectively much better specialists to play as out of the box
It's not really a battle royale game on account of it being completely unbalanced. They can't change this without removing the hero mechinic mind.
Posted by JBuckland - Tue 05 Mar 2019 15:28
On the twitch side I think it's better to watch live than Fortnite, even for highlights on youtube the clips are much easier to digest without the building aspect. For someone who watches a lot more games than actually plays them like me, I think AL is a step in the right direction.
Posted by big_hairy_rob - Tue 05 Mar 2019 23:42
huge amounts of views come from huge promotional budget. It's hard to visit a tech/gaming site without seeing it advertised everywhere; however, I don't know anyone playing it or even interested in playing it…
Posted by j.o.s.h.1408 - Wed 06 Mar 2019 10:55

big_hairy_rob
huge amounts of views come from huge promotional budget. It's hard to visit a tech/gaming site without seeing it advertised everywhere; however, I don't know anyone playing it or even interested in playing it…