Epic Games has announced that it will provide a $100,000,000 prize pool for eSports events featuring Fortnite competitions. In a brief blog post the company behind the Unreal Engine and, of course, the hit game Fortnite said that it wants to empower eSports gamers and put its weight behind competitive gaming events. 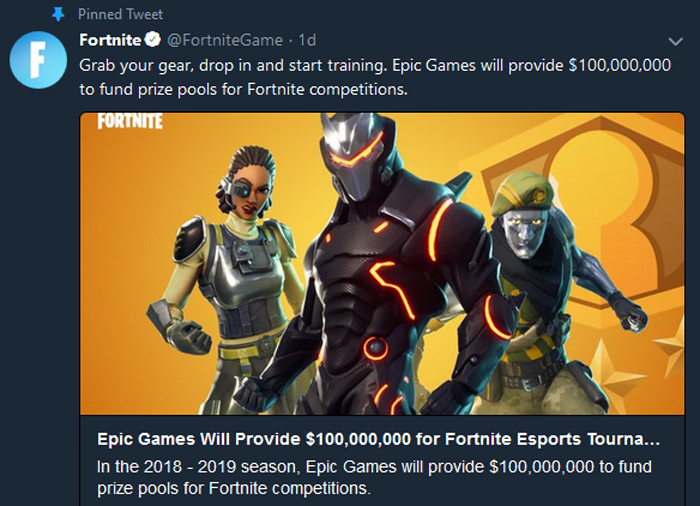 Fortnite started life as a free-to-play 'action building game', first announced back in 2011 and teased shortly before release at E3 2017. At launch, last July, it was billed as a third person action game where the player would "build huge forts, craft exotic weapons, find loot, and level up your squad while leading the world's remaining Heroes in the fight to save humanity and take back the world." However its wild success over more recent months is down to a mode introduced last September, called Fortnite Battle Royale. This standalone mode was built on the Fortnight game foundations but based on the battle royale game genre popularised by PlayerUnknown's Battlegrounds (PUBG for short, which is currently priced at £27 for PC). 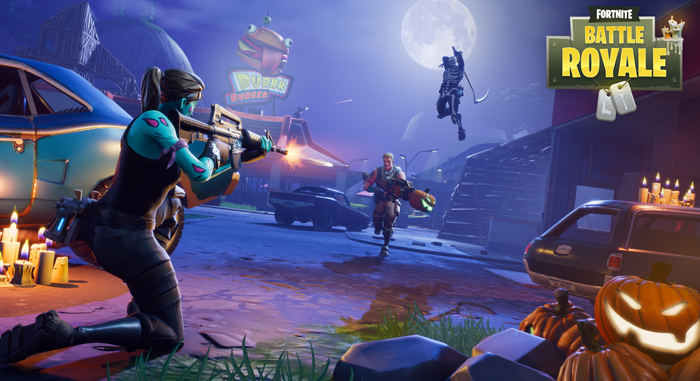 "Grab your gear, drop in and start training. Since the launch of Fortnite Battle Royale we’ve watched the passion for community competition grow and can’t wait to empower you to battle with the best.

In the 2018 - 2019 season, Epic Games will provide $100,000,000 to fund prize pools for Fortnite competitions. We’re getting behind competitive play in a big way, but our approach will be different - we plan to be more inclusive, and focused on the joy of playing and watching the game."

Finally we are told to wait for more details about the competitive structures and eSports platforms in coming weeks.

The lack of details allows for Epic to get some more PR out of this headlining $100 million figure. Analysts speaking to the BBC think that the idea is a smart marketing move by Epic. Furthermore, it is thought that the $100 million will be of great use in launching the game as a competitive eSports title in China in coming months.

If you wonder about what form Fortnite competitions might take, Engadget reports that a recent competitive weekend featured a Solo Showdown mode, "where players picked up points depending on how highly they placed in 50 games, rather than having to win matches outright". It is noted that rival hot eSports title Overwatch was only boosted by $3.5 million in prize money from Blizzard in its first year. However, Fortnite earned Epic Games $126 million from in-game purchases in just one month earlier this year according to games analytics firm Superdata.

Posted by Output - Tue 22 May 2018 21:17
I was going to ask how that could possibly be funded if it were assumed that most Fortnite players are doing so for free, but the mention of in-game purchases generating over that amount just in a single month clearly already answers that. :surprised:
Posted by Yoyoyo69 - Wed 23 May 2018 08:15
Valve have made trillions from this, but figures are never mentioned. Just prize money (per competition).

They managed to make $126 in a month. With the publicity this prize pool, and the resulting draw to watch / play during tournaments, this will absolutely skyrocket.

This is still $100m for an entire year, they'll make this back (more than one times over) during one competition. The rest is gold
Posted by Jonj1611 - Wed 23 May 2018 11:11
$126 million in just one month from in game purchases! Incredible
Posted by Xlucine - Wed 23 May 2018 12:39
No wonder every game company is trying to cram lootboxes wherever they can!
Posted by Spud1 - Wed 23 May 2018 22:53
It sounds a lot, but its still a tiny prizepool compared to the main PUBG tournament this summer which has a $2million prize pool. Then again bluehole have a lot more money to chuck about given they charge an up-front fee plus have loot crates. It's a shame (for console gamers & bluehole) that they tied up with Microsoft as if they had launched PUBG on PS4 as well, I'm 100% certain the total playerbase would vastly outnumber fortnites. Guess we will find out when the exclusivity period is up!