Just ahead of the weekend Ubisoft dropped a couple of news nuggets regarding its upcoming Far Cry 5 escapade. Ubisoft has revealed its Far Cry 5 Season Pass details. In another news bulletin, it announced the release of the Far Cry 5 Story Trailer (video). 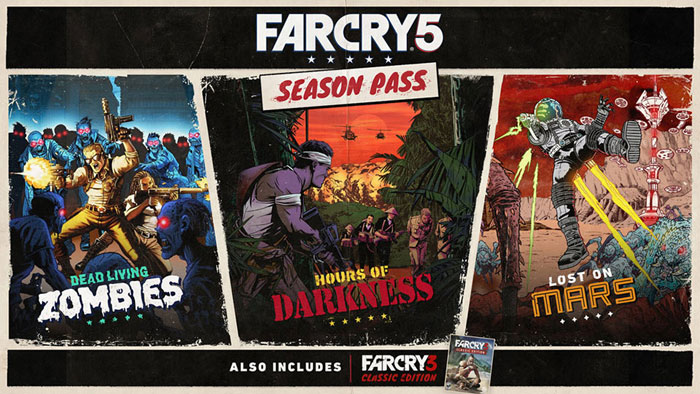 The season pass for Far Cry 5 will contain a diverse range of content. Above you can see the promo image showing that season pass purchasers can enjoy:

There are several editions of Far Cry 5 that you can (pre)purchase. Ubisoft encourages the purchase of its Gold Edition (or Steelbook Gold Edition) which includes the game and Season Pass. As an extra enticement Gold Edition buyers get Far Cry 3 Classic Edition with four-week early access too. All edition pre-orders qualify for at least a bonus ‘Doomsday Prepper Pack’ which includes character outfit, gun and vehicle skin, and additional consumables. 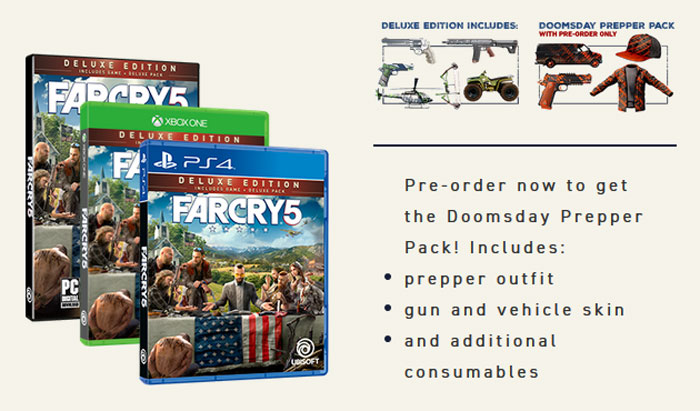 Ubisoft’s new story trailer for Far Cry 5 is embedded below. In the video you can see the backstory for the game revolving around a doomsday cult which kidnaps local people and takes their land. Eden’s Gate is led by the charismatic Joseph Seed and you will lead the resistance against him and his fanatical followers.

As a reminder, a couple of weeks back we got the lowdown on the PC recommended specs for this new Far Cry game. Far Cry 5 is scheduled for release on 27th March on PlayStation 4, PlayStation 4 Pro, Xbox One, Xbox One X and PC.

I was going to pick this up right away on day one as it does look like an amazing game, but now I see that there is a substantial list of extras before it is even out, I will wait for the complete (real) edition on discount, thanks for the heads up!
Posted by Iota - Mon 05 Feb 2018 15:16

Nope. Not touching the game. Release the full game and I'll think about it.
Posted by Tunnah - Mon 05 Feb 2018 18:08
The above complaints about extra content are weird. If they never mentioned it, you'd be OK with the final game as-is, but because they developed DLC simultaneously, that you have a problem with ?!

Personally, I'll get it on day 1 just because I love Far Cry games, but I'm kinda disappointed how similar it is to 4 in graphics and fidelity and mechanics.
Posted by Strawb77 - Tue 06 Feb 2018 00:13
one very good reason to not buy games on day1 manifested itself with the release of wolfenstein2 insomuch as very soon after (i think it was less than a week) it was on steam sale for half the price.

this was really really annoying, so like evil and iota above- i`ll be waiting a very long time before i buy fc5, or any other game come to that.

buying any game on day1 has become a triumph of optimism over experience- at least in my book.
Posted by deejayburnout - Tue 06 Feb 2018 12:22
Not sure if I will be getting this as FC4 was just FC3 with new graphics.

It feels like the are following The Division model. The season pass add more game modes. If they follow it fully then it will have a few free ones too.